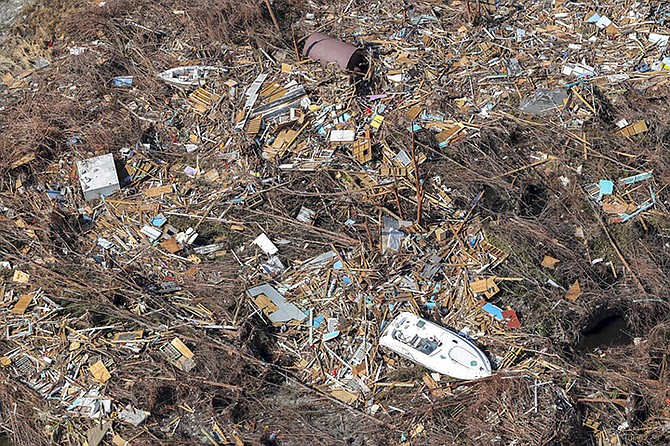 Fishermen yesterday said Hurricane Dorian had "totally destroyed" 80 percent of the industry in Abaco and Grand Bahama amid uncertainty over how the government will aid recovery.

"Eighty percent of the fisheries sector in Grand Bahama and Abaco is totally destroyed. We're not sure what the government will do to help us after Dorian," said Keith Carroll, the Bahamas Commercial Fishers Alliance's (BCFA) vice-chairman.

"Hurricane Mathew in 2016, when I lost some 4,000 lobster traps, the government at the time took the VAT off replacing the traps and, luckily, everything for fishing is duty free. Replacing a trap could cost about $50 to $60 from build to placement, and you have about a four year lifespan on a lobster trap."

Mr Carroll estimated that in the Dorian-ravaged northern Bahamas, from Marsh Harbour up to eastern Grand Bahama, fishermen in those areas lost between 80 percent to 90 percent of their entire vessel fleet. "Most of the mother ships are on the land right now and cannot be used," he added.

This was echoed by Paul Mailis, a director of the National Fisheries Association of The Bahamas, who is currently conducting damage assessments with teams from the United Nations' Food and Agriculture Organisation (FAO) and the Department of Fisheries.

He said the fisheries infrastructure in Grand Bahama had suffered 80 percent damage, with near 100 percent destruction to vessels along with the processing and brokerage storage facilities in the island's eastern end.

Some 70 percent of the fishing fleet is damaged in Freeport, while in Abaco destruction to the fisheries infrastructure in the Marsh Harbour, Man O' War Cay, Guana and Green Turtle Cay areas is estimated at between 95 percent to 100 percent.

Mr Mailis added that "the largest processor in Abaco, Marsh Harbour Exporters, lost about 60,000 pounds of crawfish during the storm."

He added that fishermen will probably not find any traps in the Little Bahama bank area either, as he learned from personal experience after Hurricane Matthew in 2016. "All the sea bed is gone and it will take about two years for the sea grass to grow back," Mr Carroll said

Mr Carroll said fishermen typically have no private insurance as they cannot qualify for coverage, which he said is usually the norm for agriculture as well.

He expressed hope that the Caribbean Catastrophic Risk Insurance Facility (CCRIF) that the Government signed on to in 2018 may help. Mr Carroll said he was aware that the rest of the Caribbean has insurance on their fishing equipment through CCRIF, but he was not sure if it covers all fishermen and farmers.

It was announced in July 2019 that the CCRIF, in collaboration with the World Bank, issued the Caribbean Oceans and Aquaculture Sustainability Facility (COAST) for Grenada and St Lucia.