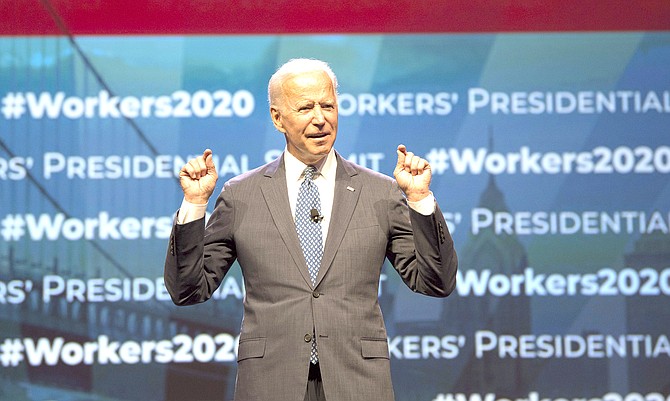 A year can be an awfully long time in politics, as American voters are about to find out.

With the 2020 general election in the U.S. just over 13 months away, what shapes up as a referendum on current president Donald Trump will dominate the news unlike anything else.

Although Trump has already attracted a couple of primary challengers for the Republican nomination next year, the president is likely correct in dismissing their candidacies as profoundly insignificant. Trump continues to enjoy the support of well over 80 percent of likely GOP voters, according to polls for several months now.

The big question about 2020 is who will the Democrats nominate to oppose Trump, and can that person actually defeat him?

The answer to that question, both before he entered the race for the Democratic nomination and especially since that time about six months ago, has been former Delaware senator and vice-president Joe Biden.

A garrulous, back-slapping old-style politician, Biden has been in the public eye for over 40 years. He has run unsuccessfully for president twice before, but his campaigns fizzled out fairly early in the Democratic primary season both times.

Now in his upper 70s, Biden has consistently led the polls among the more than a dozen candidates still competing for the Democratic nomination.

Several of his party’s most prominent contenders have domestic and foreign policy positions that are more progressive and innovative than the potential platform ideas enunciated by Biden. His opponents, with the exception of Bernie Sanders, are all younger and often seem more energetic than does Biden.

So why does Biden continue to dominate this primary race?

Part of the answer lies in simple name recognition. Precisely because he has been so long in public life, and so prominently, Biden’s name is familiar to the potential voters contacted by the numerous American public opinion polling services.

But there’s much more to Biden’s persistent popularity, and some of the reasons might be surprising.

In many minds, the most important of these reasons is race. Another is gender.

Biden is also not a woman, like Massachusetts senator Elizabeth Warren, Minnesota senator Amy Klobuchar or New York senator Kirsten Gillibrand. He is not openly gay and married to a man, like South Bend mayor Pete Buttigieg.

The other older white man in the contest, Vermont senator Bernie Sanders, has had persistent trouble dealing with the race issue, both in campaign appearances and within his own staff. And he seems cranky, somehow. His act, however powerful its ideological appeal, seems to be getting stale. We’ve been there and done that with Bernie.

That leaves Uncle Joe Biden, hearty and friendly, ferociously loyal to his former boss and buddy, Barack Obama, prone to verbal mis-steps, still with the hair transplant from 40 years or so ago, but.. old and white.

Is this the next president? Is this even the next Democratic nominee?

If so, how can this be in 21st Century America, most of which is now, the polls tell us, unprecedently open to diversity and stoutly opposed to the nativist xenophobia now predominant in the White House?

Agadjanian’s conclusions need to be digested with a healthy grain of salt, both because polling’s credibility still hasn’t recovered from a bad predictive episode in 2016, and because an MIT researcher in a different academic division just departed because of unsavory ties to disgraced millionaire sex villain Jeffrey Epstein.

But still. Here’s what Agadjanian found on Biden’s strong appeal with Democratic voters.

This is paradoxical, but apparently true: Biden simultaneously attracts the most support from Democrats with the highest anti-black prejudice and, by far, the greatest support from African-Americans themselves.

“Racial resentment and sexism more strongly predict support for the former vice president than many other demographics and policy views,” Agadjanian says. “Race and gender views also play a larger role than policy preferences for the other candidates.”

The MIT researcher found that moving from the least to most sexist Democratic voter increased Biden’s support by 19 points. (Sanders benefited much less in this area.) And similarly, among Democratic primary voters, Biden’s support rises by 27 points moving from the least to the most racially resentful. Again, Sanders benefits little from this phenomenon.

The home for most American sexist and racist voters in today’s United States is of course not the Democratic party.

That turf has been comprehensively staked out by the incumbent president. But Agadjanian’s research shows what we intuitively suspect. There are plenty of Democrats who share Trump’s bigotry, at least to some extent.

Some estimates put this share of the Democratic demographic at 20 percent.

Some speculate that “conservative” Democrats lean most to Biden because, during the Bill Clinton administration, the Delaware senator chaired the Senate Judiciary Committee and enthusiastically embraced Clinton’s anti-crime toughness.

Nonetheless, Biden’s support this summer is running 18 percent higher among black Democrats than among white voters in his own party.

This likely comes from Biden’s most recent star turn on the national stage as vice president, confidante and obvious friend of America’s first black president.

While Obama has not yet endorsed anyone in the Democratic primary race, almost everyone expects that he will jump in at some appropriate point and support his loyal pal. That will likely be good enough for most of the Democratic party’s most steadfast constituency – African American voters.

The American election is still over a year away. But for now, it actually seems that Joe Biden can have it both ways.

He’s the beneficiary of strong support from some of the most conservative elements in his Democratic party, while at the same time attracting the passionate support of some of its most loyal, progressive elements.

That’s how he could get nominated, and elected, next year.