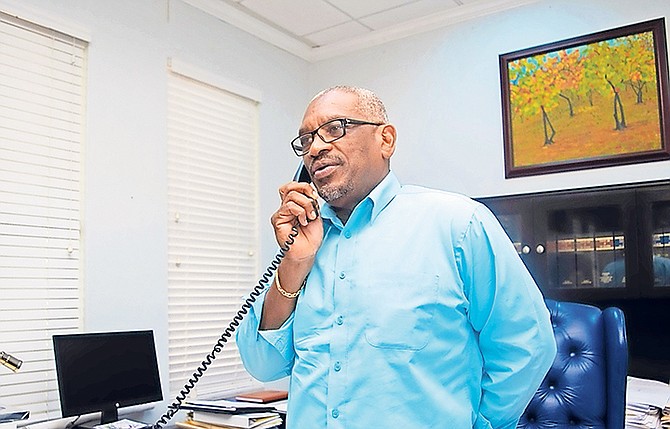 Mr Clinton expressed his sadness over the devastation caused by the Category Five storm, and the Clinton Foundation’s willingness to assist The Bahamas in its recovery efforts.

Dr Minnis highlighted the need for temporary housing for residents who lost their homes during the storm, the need for assistance with storm debris clean-up and power generation to essential services on islands affected by Hurricane Dorian.

Both Dr Minnis and Mr Clinton emphasised the importance of rebuilding the storm affected areas with resilience, given the impact of climate change on small island developing states such as The Bahamas.

Mr Clinton noted that the Clinton Foundation would hold a special session on the Bahamas during one of its upcoming meetings.

Mr Clinton also referred to the foundation’s experience in working on relief efforts following the magnitude seven earthquake that struck Haiti in 2010, and Hurricane Maria that caused catastrophic destruction to Puerto Rico two years ago.

Dr Minnis thanked Mr Clinton for his call and the continued support of the Clinton Foundation.

Seriously? The Clinton Crime Initiative took in millions for Haiti and delivered nothing, according to long published reports. A side chapter involved reported smuggling of Haitian women for lascivious purposes. Are you serious with this?

Clinton discussed 'rising seas'? Isn't that why he's known as Bubba Bullshxx? The seas are not rising, but from the sound of it, the Clintons and their globaloney gangster cronies are covetously eyeing the Bahamas.

The Clintons give nothing without expectation of getting tenfold back in return. What's their angle here?

Minnis would be wise to steer our country in its dire time of need well clear of anything to do with or involving the notorious Clinton crime syndicate.

Are you guys buried in the Fake News dungeon , thus loosing your good sense and talking about the Clinton Foundation misdeed. Where is the proof? That foundation refused to allocate the rest of the money collected for Haiti due to corruption. They will eventually fund the reconstruction of Abaco, especially for the immigrants that now the Bahamas are trying to eliminate in their history. History repeats itself...It could happen again and it could be even worst. Do no blame each other...Blame the Global warming people who still believe that it is a joke. Please show me the proof that the Clinton Foundation has robbed so much and I will personally forward to the Foundation demanding that the allegations must be proven UNTRUE!! Please remember Haiti was the first who gave to the black world a taste of Freedom , for which thea are still paying a disastrous "FEE". That country will wake up one day and show the world that we are still surviving AND WILL THRIVE ONE DAY JUST LIKE RWANDA.