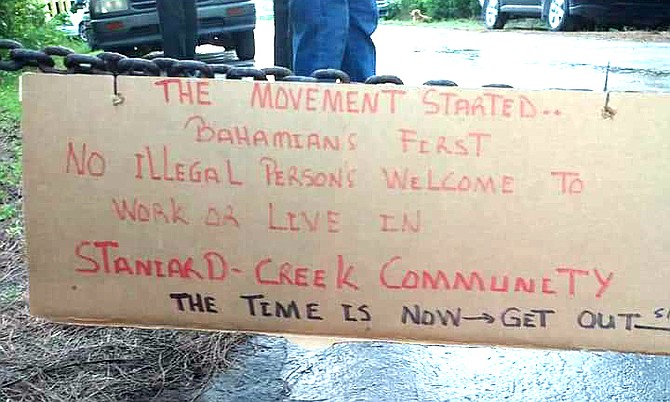 A sign at the bridge leading to Kamalame Cay.

A GROUP of Andros residents from Staniard Creek blocked a bridge leading to Kamalame Cay in an attempt to prevent some Haitian nationals from going to work on Thursday morning.

According to Superintendent Ricardo Richardson, officer in charge on the island, residents alleged the workers were undocumented, insisting this was their reason for prohibiting them to pass.

Supt Richardson said there was no violence and police ordered the group to unblock the bridge.

A meeting was then held at 11am with several officials, including immigration officers who conducted due diligence, but found no merit in the claims.

Supt Richardson said he was given the assurance of residents that these actions would not reoccur.

.......immigration officers who conducted due diligence, but found no merit in the claims.

Our corrupt politicians and equally corrupt immigration officials continue to turn a blind eye to our country's illegal alien crisis and give a deaf ear to the cries of 'true' Bahamians who are suffering from the many adverse social and economic issues caused by our government's continuing failure to address the crisis.

Hurricane Dorian has revealed what many of us already knew - our illegal alien crisis is a much greater crisis than any other crisis facing our country today, including the effects of climate change and the high probability that New Providence will take a direct hit from a category 5+ hurricane within the next decade.

Time is now of the essence for our government to aggressively and forcefully enforce our immigration laws. The illegal alien crisis is literally strangling our country and destroying the lives of the vast majority of 'true' Bahamians.

Successive PLP and FNM governments are the perpetrators of illegal Haitian migrants invading our country. It is unrealistic to expect them to police themselves to now make a 180-degree turn with the repatriation of these people.

These lousy politicians should be called out and held accountable for the damage they caused to our country AT OUR EXPENSE!

Androsians made the right move. No illegal migrant from anywhere should be allowed to work while Bahamians are unemployed standing in food lines begging for handouts. It is obviously up to we the people to enforce the immigration laws of our country!

I am willing to donate to support their cause! Its about time!

This group of Bahamians should know better than to try to impede Haitian progress. Obviously the police were aware of this fact and put a stop to it. Bahamians needs to learn - when you see a Haitian, bend down on one knee and bid him or her bonjour as they walk past. Offer them land and food and shelter and any milk you have for your own baby.

Instead of blocking that bridge - they should have gotten tools and worked on expanding it wider and helped the workers to carry their tools and luggage across and provide them transport to their places of employment - and thanked the employer greatly for providing that employment and asked him/her to next provide them with a raise in pay.

Staniard Creek is in mortal battle not to become another Abaco.

Why are Bahamians made to fight this battle without their government 's support??????

Ma comrade,this extends beyond the employing Haitian nationals. The colony of out islands labour minister, 'the naive' honourable comrade Dion, was blatantly told that regardless the written provision whereby a minimum of 70 percent The Pointe's workforce, has to be made up of locals .... the developers clearly and instinctively lectured the colony's crown minister Dion, that the locals are not needed at this period project's construction - and what in hell was comrade Dion's response, not do a goddamn thing about being rebuffed, yes, no ... You just can't make such ministerial naivety up along with simple fact that here is am actual functioning ministry of labour office located right there inside The Pointe ..... nor, how is it ministry of labour staff didn't walk by daily and failed take notice of overabundance non local workers .... ^^and that crown minister Dion is yet explain what hell happened to the 200 foreign national workers who all had work permits to work at Baha Mar - but never did exit the colony, after they had completed their work but never did make their exit ....

the more than 40 years of neglect and corruption of dealing with the illegal exploitation of Haitians are now coming to head, and we the Bahamian citizens have only ourselves to blame, Firstly the leaders who were supposed to be looking out for its citizens and then us for being lazy, being unreliable, being to middle class and turning up our noses to jobs that we could have done ourselves, This is just the beginning of a long road to disaster, a different type of DORIAN

True Bahamians are the only ones who have been exploited, both by successive PLP and FNM political leaders who have facilitated the invasion of our country by illegal Haitian aliens. To say the illegal Haitian aliens have been exploited by true Bahamians is laughable. If that were indeed the case, why are they still here sucking the life blood out of the Bahamas and true Bahamians. Why hasn't our government gone after the likes of the super wealthy Mosko family who have for many decades employed illegal Haitian labour and/or paid immigration officials under the table to fraudulently obtain residency papers and other documents for their low cost supply of Haitian labour? And the Mosko family are not the only ones in the construction industry to have done this. Many employers engaged in the agricultural sector of our economy have done exactly the same thing.