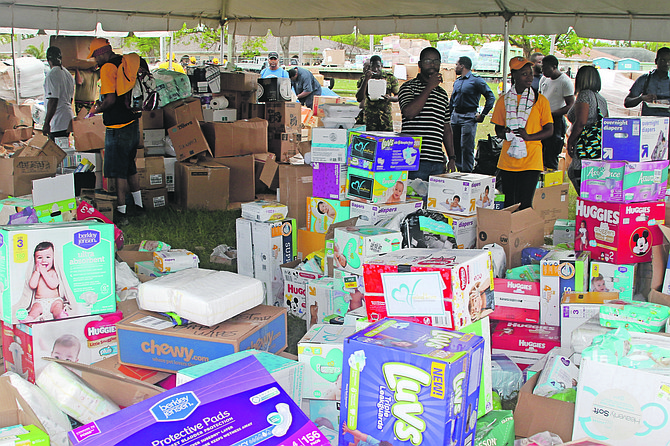 Supplies being distributed by NEMA at Independence Park in Freeport on Saturday. Photos: Vandyke Hepburn 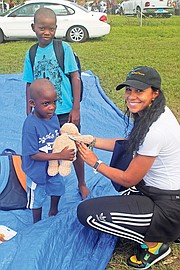 HUNDREDS gathered at the Independence Park for Operation Relief Saturday - a major event organised by the National Emergency Management Agency to distribute much needed supplies, water, and hot meals to residents in a family fun atmosphere.

Families from near and far came with their children at the park from noon to 6pm on Saturday to collect supplies. There was also music, face painting, bouncing castle and slides, and free ice-cream.

Elnet Maritime Agency partnered with NEMA on the weekend, also delivering and donating trailers of goods for distribution at the park.

Senate President Kay Forbes-Smith, coordinator of NEMA Grand Bahama, said the venue served as an ideal central location for the distribution of relief supplies to residents.

"We started last week going in neighbourhoods but decided we would move to the Independence Park because we still had so many complaints of people saying they weren't getting supplies," she said on Saturday. "So, we wanted to find a location that most people can get to and give out relief supplies to persons."

People stood for hours in line to have their boxes filled with relief items. However, many did not seem to mind the wait, chatting with each other, enjoying the breezy conditions.

"I am so sorry that the line is so long, but that is indicative of the need. We are going as fast as we can, and we have volunteers doing the best they can, and I thank all the volunteers out here today," Mrs Forbes-Smith said.

Additionally, various services were available on site, including counselling provided by counselors from the Department of Social Services, and representatives from Bahamas Customs/Inland Revenue, Department of Labour, Bahamas Red Cross, and BTC were also present.

Following the passage of Hurricane Dorian, relief supplies poured into Grand Bahama from many organisations and individuals, both locally and overseas. The supplies are stored at NEMA's warehouse at Freeport Transport building, where they are sorted and packaged for distribution.

Mrs Forbes-Smith said it is important to get the relief supplies out of he warehouse and trailers and in the hands of those who desperately need them.

"The relief is going well, but we have to address people's basic needs as people are still requiring and need supplies, and so that's all we trying to do. I am big on nothing being stored in the warehouse or trailers; I am big on getting it out the best way I can," she stressed.

In addition, residents are advised that forms for duty-free importation of replacement vehicles can be found at the Office of the Prime Minister in Abaco. Application forms for NEMA building supplies are also available there.