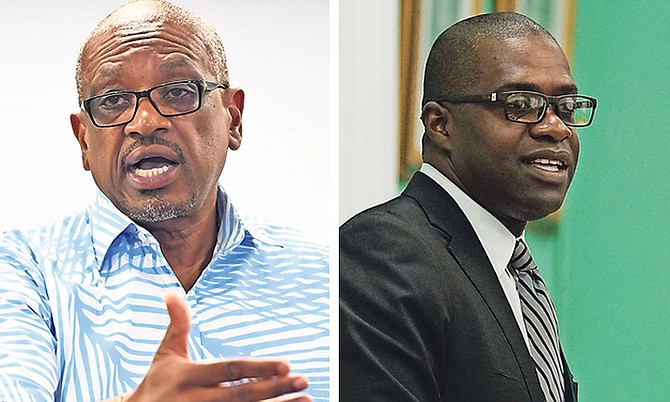 PRIME Minister Dr Hubert Minnis said undocumented immigrants affected by Hurricane Dorian face no protections and will be subject to the country’s laws of apprehension and deportation.

“Our laws will be followed, full-stop,” he told The Tribune. “We have laws and they will be followed and adhered to. Those who have broken the law will be dealt with according to the law.”

The government had suspended apprehension and deportation exercises in areas affected by Hurricane Dorian in the immediate aftermath of the storm, but officials yesterday suggested that undocumented people displaced by the storm cannot expect to go about their lives as if they are protected from repatriation permanently. Many displaced residents, especially undocumented ones, are believed to be staying in shelters on New Providence.

Immigration Minister Elsworth Johnson said the suspension of repatriation exercises in Grand Bahama and Abaco was to to ensure that everyone, regardless of status, received social assistance and healthcare in keeping with international norms. Now, he said, undocumented immigrants must ensure that they have at least applied for legal status in order to escape deportation.

“Now that we are in the restoration and rebuilding phase, we are enforcing our laws,” Mr Johnson said. “Dorian did not give persons amnesty. If you were without status before the storm, you remain without proper status after the storm. If you don’t have your stuff, look at what the law requires. The laws will be applied in a way that maintains the dignity of people. We are in the rebuilding phase in Abaco and businesses must also ensure that the persons they hire are legal.”

Speaking to reporters on the sidelines of a ceremony at Government House, he also said he still has confidence in the National Emergency Management Agency (NEMA). Under the Disaster Preparedness and Response Act, NEMA is responsible for coordinating and implementing the general policy of the government with respect to “mitigation of, preparedness for, response and recovery from emergencies and disasters in the Bahamas,” all of which now characterises the role of the new Ministry of Disaster Preparedness, Recovery and Reconstruction.

Asked if he has confidence in NEMA’s leadership, Dr Minnis said: “I have confidence in NEMA. You must remember, this is a storm that was never ever seen before so they had to work with what they had under the conditions that were presented to them.”

According to people familiar with his thinking, the confidence of former Prime Minister Perry Christie in NEMA’s head, Captain Stephen Russell, was shaken in the aftermath of Hurricane Joaquin, a storm that devastated central and southern islands in 2015. Even though he valued Mr Russell’s ties to regional organisations like the Caribbean Disaster Emergency Management Agency (CDEMA), Mr Christie believed NEMA took too long to mobilise, according to two sources who spoke to The Tribune on the condition of anonymity. In the aftermath of Hurricane Dorian, local and international criticism has centred on the pace of mobilisation of local resources.

Iram Lewis, the newly minted state minister, declined yesterday to criticise NEMA, saying the organisation will be playing an important role under his ministry.

“I don’t want to get into the name blaming, I would never criticise NEMA, because, like the rest of the country, we’ve never faced this level of superstorm before,” he said. “NEMA will be a way of reinforcing what I’m doing. Ongoing training is certainly necessary (at NEMA). Insofar as what NEMA has to do, nothing in particular, but the whole ministry, we have to focus to see how we can work hand in glove to ensure that if we go through another serious storm like this, that we will be prepared.”

Ok stop the pretence and the nicely framed words. Just start the Roundup. Follow the law. Deport. Recovery phase with Hundreds still missing? O useless Haiti Government, have you send even a crocus bag of red peas for your people Dem? Jah know.

"Immigration Minister Elsworth Johnson said the suspension of repatriation exercises in Grand Bahama and Abaco was to to ensure that everyone, regardless of status, received social assistance and healthcare in keeping with international norms. Now, he said, undocumented immigrants must ensure that they have at least applied for legal status in order to escape deportation."

How can an undocumented or illegal immigrant apply for LEGAL status Minister??? Ya'll need to stop talking out of both sides of your mouths!

Immigration Minister Elsworth Johnson is in way over his head. Politicians continue thinking Bahamians are stupid. This FNM crew developed short memory syndrome rather quickly. In 2022 we the people will show these bullshyters why Hubert Ingraham and Perry Christie and virtually all their MP's were voted into oblivion.

We the people are sick and tired of supporting illegal Haitians while we watch our people stand in soup kitchen lines begging for handouts!

We the people DEMAND the FNM get off their collective backsides and deal with the illegal Haitian migrant invasion throughout the country as a matter of priority before another storm affects Nassau, Eleuthera, Andros and Exuma, and the government take our tax dollars plus borrow countless millions in loans to care for illegal Haitians.

The Bahamas CANNOT be the answer to Haiti's problems!

and what exactly is the law regarding "Haitians" born in The Bahamas ? I'm pretty sure there is no law. The Bahamas is going to have a large "Haitian" population forevermore. Y'all can stop shouting now and get on with life. There are bigger fish to fry.

... the law applies to any person born in the Bahamas to LEGAL residents. They have the right to apply for citizenship at the age of eighteen. Those born to residents here illegally have no constitutional right to apply, even though it has been given in the past (unconstitutionally). Immigration laws can easily be reviewed online.

Thought this was said about 2 years ago? And by the prime minister before and the one before. Then nothing is done. They need to come up with a sensible immigration policy and then stick to it.

my point exactly, every time the government vows to ''get tough'' nothing of any substance happens....yawn

Now, he said, undocumented immigrants must ensure that they have at least applied for legal status in order to escape deportation.

If you don’t have your stuff, look at what the law requires. The laws will be applied in a way that maintains the dignity of people.

Read the coded talk between the lines my fellow 'true' Bahamians. Minnis has a forked-tongue talking out of both sides of his mouth. The quotes immediately above from Minister of Immigration Elsworth Johnson are an outright admission that the Minnis-led FNM government has absolutely no intention of rounding up and repatriating the many many thousands of illegal Haitian aliens in our country. In fact these words are nothing but a loud clarion call for all illegal Haitian aliens to make application to obtain residency status in the Bahamas notwithstanding that they have already broken numerous laws, including illegally entering our country, unlawfully squatting on land they don't own, and unlawfully building clap board housing and/or residing in unsafe and dangerous shanty towns. Since when do we invite known criminals from another country to become residents of our country?!!

Elsworth Johnson, with the blessing of Minnis, is telling these criminals how to go about remaining in the Bahamas with the help of our Ministry of Immigration. This is an unjust violation of our immigration laws by the Minnis-led FNM government; the very laws that were long ago put in place with the full expectation that they would be enforced to the fullest extent possible in order to protect the Bahamian people.

Minnis is frankly even more deceitful than Ingraham, Christie and Davis combined. In fact, what Minnis and Elsworth are doing here can only be described as treasonous conduct of the highest order.

For likes year now, your most humble comrade blogger has been blogging that you just can't be slungin your bag lies to the populaces, and on the floor House, over your shoulders and walk around governing - without looking over your shoulders for the moment the wrath of the still, all powerful Queen, arrives to tap your government on the shoulders, yes, no ....

It's all too obvious that Minnis has pointed his index finger of blame at NEMA's head, Captain Stephen Russell. Minnis is constantly ducking and dodging blame for just about any and everything - the buck never stops with him! He's always looking for the sacrificial lamb to take the fall, especially one he did not appoint. Such is the modus operandi of a weak man bereft of the capability to lead, among so many other shortcomings.

With the help of Fred Smith and his sympathizers, Haitians will eventually rise up here as they are accustomed to doing in Haiti!

The PLP and FNM politicians responsible for allowing these violent people into our country will retreat to their police guarded homes and gated communities leaving we the people to fend for ourselves.