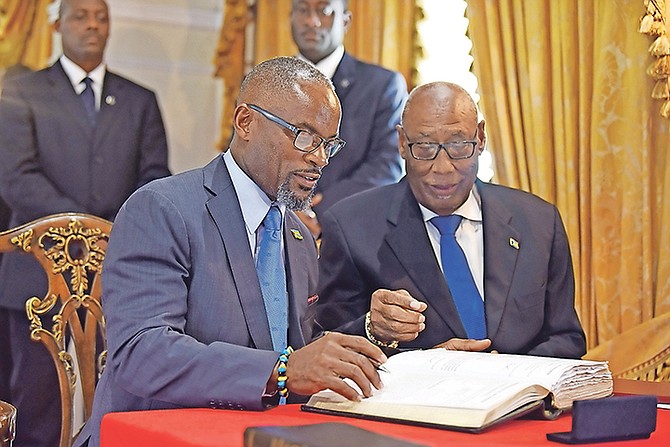 YESTERDAY’S press reports about the creation, in the aftermath of Hurricane Dorian, of a new ministry to deal with disasters will no doubt be widely welcomed.

Having argued in last week’s column for the appointment of a heavyweight supremo to oversee and coordinate the recovery and reconstruction of Abaco and Grand Bahama, I think it is good news that a separate ministry will now be in place not only to carry out this task but also to take charge – on a permanent basis and reporting directly to the Prime Minister – of disaster preparedness and the handling of major incidents in the future.

This is a significant development because having a government minister directly responsible provides the required authority and weight to achieve success in such vital work. With energetic and imaginative leadership, it should also help to give the staff in the new ministry the necessary delegated authority to be able do their jobs effectively.

British Airways - a hundred years of reaching for the sky

After writing last week about the 80th anniversary of the outbreak of the Second World War, it might be interesting to note another anniversary of a much happier kind. This is the centenary last month of the establishment of international air services in 1919 by a forerunner of British Airways. There were a number of celebratory events to mark BA’s 100th birthday but the milestone seems to have attracted only limited publicity.

BA traces its history back to August of that year when a company called Aircraft Transport and Travel started operating a daily flight between London and Paris – from Hounslow Heath which much later developed into the mighty Heathrow -- and Le Bourget, using a small British-built, single engine biplane carrying a few passengers together with mail. This was considered to be the world’s first international commercial air service.

Nowadays, BA operates some 800 flights a day to 200 destinations around the globe and has developed into one of the world’s leading airlines. Four fledgling airlines merged to form Imperial Airways Ltd in 1924, and another amalgamation created the privately-owned airline which was later nationalised and became BOAC (British Overseas Airways Corporation) and BEA (British European Airways) operating, respectively, international and short-haul European and domestic routes. In 1974 these were combined to form British Airways which was privatised in 1987.

It would be foolish to claim that as an airline BA is not without its critics. While many are generally satisfied with BA’s performance, it is the case that others complain about high fares, computer failures, check-in difficulties, lost baggage, indifferent food and unhelpful cabin staff. Some still recall the teething troubles at BA’s relatively new Terminal 5 at Heathrow; and, most recently, many have condemned the current industrial action by pilots who, by most people’s standards, are already well remunerated, and deservedly so for what is a highly skilled and responsible job.

Reportedly, such strike action by BA pilots is unprecedented. It has caused serious disruption of schedules and unacceptable inconvenience to passengers together with continuing uncertainty – and, if this strike is not called off, the repercussions could do irreparable damage to the airline.

From comments online, it is clear that most people do not want to know the details. But that the strike has happened at all suggests to many observers that BA’s management has been incompetent, if not irresponsible, by allowing such a harmful situation to develop – instead of reaching some sort of compromise in such a sophisticated and competitive industry.

Such a litany of criticism sounds serious and perhaps this is not the moment to be singing BA’s praises. All that said, however, many of its faults and problems are common to most, though not all, airlines. What is surely the top priority for most people is commercial aviation safety. So it is worth emphasising that BA was rated one of the safest airlines in 2017 and 2018 and has had only one fatal accident since it was formed in 1974 – and that was a midair collision later blamed on an air traffic control error.

Having travelled on a variety of airlines in many different countries during a long diplomatic career, one has inevitably faced greater risks -- not least in West African countries whose air safety records are, at best, variable – than taking the shuttle from London to Manchester or Edinburgh.

But I, for one, board any BA flight with confidence because of its reputation for good, thorough and effective maintenance and the sure knowledge that its pilots are well trained, well qualified, competent and experienced.

For all its other shortcomings – many of which are, I believe, often exaggerated -- BA scores highly for its safety standards, and that is surely what matters most. So, let us hope the airline will continue to prosper -- perhaps for another 100 years?

Autumn - a time for reflection

According to the meteorologists, autumn in the northern hemisphere starts on September 1 and lasts until the beginning of December which is the onset of winter.

The astronomers say it is the period from the autumn equinox – when the length of day and night is roughly equal -- until the winter solstice as the shortest day.

Be that as it may, to most people autumn is simply defined as the season between summer and winter. Unlike in the tropics where the months of August, September and October are the height of the hurricane season, autumn in temperate climes is a period of quiet and consolidation. It signals the slow descent into the hibernation of winter, with the days becoming progressively shorter and the clocks going back while temperatures slowly decline.

The wonder of nature is such that the leaves of deciduous trees drop after changing into the beautiful fall colours so spectacularly evident in New England. With the warmth of an autumnal sun and the harvest already complete, the season is a period of ripeness, mellowness and maturity.

In France, the beginning of September means ‘ la rentree’ when people return en masse to Paris from their summer holidays on the Cote d’Azur. Autumn in England means cool, still and crisp days, log fires and mulled wine, back to school and the start of the football and rugby seasons while in Germany the Oktoberfest in Munich, the capital of Bavaria, attracts six million beer lovers wanting to attend this annual beer festival. Amidst all this, I can think of nothing nicer than to listen, in solitary splendour, to the mellifluous tones of the incomparable Ella Fitzgerald singing about autumn in New York.

The season of autumn induces for many a sense of return to the normality and certainty of familiar everyday life after the excitement and activity of high summer and foreign travels. It can also be a period of reflection and readjustment while seeking balance and contentment. It is associated with Halloween, Thanksgiving and Remembrance Day. Often it is a time of sadness as a reminder of physical deterioration and decline and of loss and the impermanence of life itself. Thus, it is a reminder to people to embrace the present – carpe diem – and to appreciate and savour what they have before it disappears for ever.

But for the optimist there is always the anticipation of a resurgence of new life and of opportunities and pleasures to come after autumn turns into the fallow period of winter which then gives way to the coming spring. Even in the dullest depths of a northern hemisphere winter the promise of spring and hope for the future is never far away!

Constitutional crisis in the UK?

No, this is not directly about Brexit again but a constitutional matter that has arisen in that context. At the time of writing, the Supreme Court in England is due to reach a verdict this week on the legality of Prime Minister Boris Johnson’s decision to prorogue or suspend the Westminster Parliament.

In last week’s column I mentioned that the indications were the Supreme Court might heed the government’s submission that the courts should not “cross the boundaries and intrude upon the business of Parliament”.

However, according to UK press reports over the weekend, opinion has apparently moved against the government’s case after last week’s three-day hearing so that many now believe the court will find Mr Johnson’s advice to The Queen about prorogation to have been unlawful.

This is both intriguing and a matter of great concern that could be potentially dangerous for the nation’s democracy. The prospect of such a momentous verdict, which would mean the judiciary interfering in what is purely a political matter, has been described as likely to set off a “constitutional eruption of volcanic proportions”. Everybody is surely now awaiting the outcome of this case with trepidation.