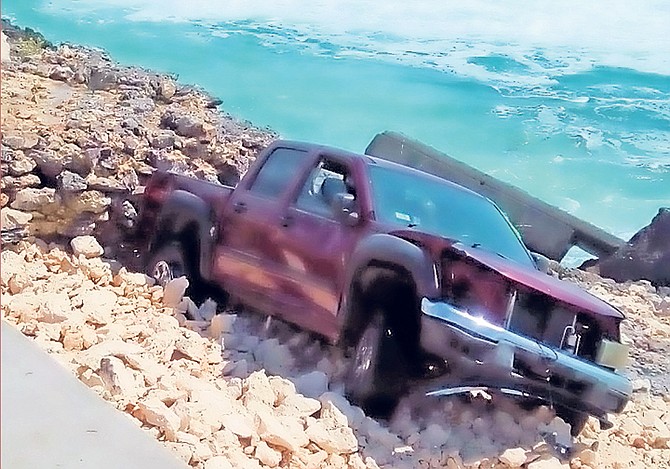 The vehicle that was swept off the road in this picture published by The Eleutheran.

TWO men had a close call in Eleuthera last week after their vehicle got hit by monstrous waves at the Glass Window Bridge and was tossed onto rocks.

One of them has faulted officials for not closing the bridge sooner, due to the sea conditions.

Eleuthera resident Edgar Seligman said it was shortly after parking his truck on the side of the road last Wednesday when weather conditions at the bridge started to deteriorate drastically.

"As my friend and I got out the truck, the ground beneath our feet was dry. We watched helplessly as the first monster wave swept my truck like a piece of Styrofoam over a concrete barrier and onto the rocks below with my dog, Harry, inside," he said. "I then took a calculated risk and ran to rescue Harry, who was shaken up as I was, but not injured."

According to Mr Seligman, his truck was hit by waves around 1.45pm. Shortly after the incident occurred, the Glass Window Bridge was closed by officials due to strong sea surge. Police in Nassau issued an advisory shortly after 2pm that day.

However, according to Mr Seligman, a special marine advisory was not issued until 5pm. He told The Tribune that if he had been notified of bad conditions at the bridge in advance, he would not have travelled there.

"We need to share information as quickly as possible. I've been told by a neighbour of mine that police were actually at the bridge assessing the situation at 11.30 in the morning… People could say 'oh, you lived there, you saw the waves' but when I got out of my truck, the ground beneath my feet was dry. It could've been avoided if people (the police) had shared information earlier," he said.

When contacted for comment, Chief Superintendent Stephen Adderley, of the Governor's Harbour Police Station, explained that once officers were notified of the situation and investigations were made, the bridge was closed with the public immediately being made aware.

"If you know what Eleuthera is like, the bridge sits between North Eleuthera and Gregory Town and if we're patrolling in those areas and we have been made aware that the conditions exist, then we'll shut down the bridge if we're aware. We made our observations when we came there and shut it down," he said.

"Sometimes conditions like that one are impromptu. It was without warning… Even though the Met Office might put out a marine advisory, it has nothing to do with the Glass Window Bridge per se. Once we understand that the conditions there exist that would put road users at risk, then we will shut the bridge down."

Police officials confirmed yesterday morning that the all clear has been given for the Glass Window Bridge, noting that it is now open for both pedestrian and vehicular traffic.

Multiple administrations have promised for years to replace that bridge with a causeway on the calmer sound side — but, as usual, the Out Islands get empty promises and spittle. Lies. Nothing but bold, cold lies from Nassau, no matter the color of the shirt.

The outislands have been shite on repeatedly since we've been the Bahamas. Don't matter PLP or FNM they only care about themselves and flippin Nassau.