Stateside: The Race Has Begun 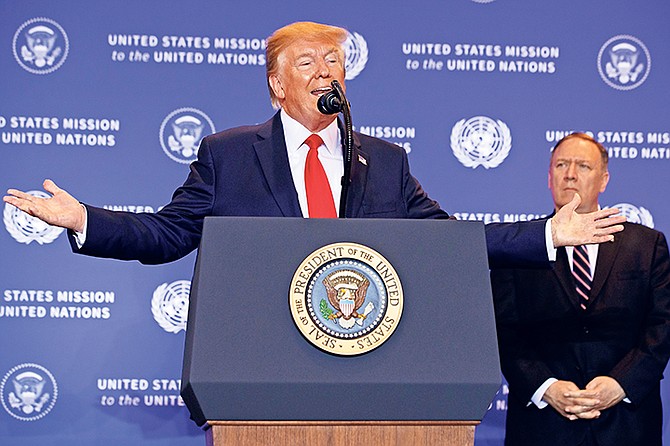 TUESDAY was the day the 2020 presidential campaign really began in the US.

Revelations that President Donald Trump appears to have tried to involve the president of Ukraine in implicating Joe Biden and his son Hunter Biden in some suspicious-looking international skullduggery evoked new cries of outrage from across the Democratic political spectrum.

Republicans such as Senator Mitt Romney of Utah and Florida’s Marco Rubio issued modulated but alarmed reactions. Many other GOP personalities remained silent.

But House Speaker Nancy Pelosi finally gave the green light to a formal impeachment inquiry. As she did so, liberal TV pundits were reminding viewers that at a roughly similar point more than 45 years ago, only 19 percent of Americans favoured impeachment against President Richard Nixon.

As that Watergate inquiry widened, and its implications grew more ominous, the calculus changed, and eventually, Republican senators went to the White House and told Nixon they could no longer support him. Facing certain impeachment and removal from office, Nixon chose to resign.

Pelosi and the Democrats in the House must believe that a similar process will unfold in 2020.

They must also feel that the American people will come to the realisation that even though Trump continues to shatter norms for presidential behaviour, and also freely to admit to most of his misbehaviour, he remains unwilling to make the effort to make himself fit for the office he holds.

He could certainly remake himself as fit to be president. Apparently, he doesn’t see the need to do so, even in order to avoid defeat by winning re-election.

But in moving so aggressively against Biden, Trump is digging into his political playbook to hit back hard at the man he believes to be his most likely, and formidable, opponent next year. There are reports that Biden and his campaign are stunned at Trump’s willingness to fight so dirty this early in the political season.

Welcome to Trump World. And prepare for a lot more information than you ever thought you’d receive about Biden’s son. Hunter Biden may have followed an established road to foreign riches. As we have learned over the decades, there’s plenty of money overseas available in exchange for access to American politicians and their relatives and their campaigns. Remember the Clinton Foundation and the allegations for foreign payoffs to the Clintons via that device?

Both Joe and Hunter Biden may have been indiscreet in their Ukraine dealings. We’ll see, and we will likely have to make a judgment for ourselves. But there will be no lack of information and innuendo on this.

Meanwhile, we must all prepare for the reality of a presidential campaign that promises to be as rough and embarrassing to the US as many have feared it could be.

As the mudslinging continues, it will be interesting to watch the campaign of Massachusetts Senator Elizabeth Warren. She is attracting bigger crowds in Iowa and New Hampshire, and promises many reforms that polls indicate might be attracting voters. Aside from her controversial claims of Native American lineage, she appears to be clean and free of personal scandal. She even looks honest. More people may be wondering “What if Warren were president?”

The return of strike action

“You haven’t seen a real strike in a long time, and now you know what this is about.” The speaker was a Detroit-area official for the United Auto Workers, and he was talking to the Detroit News this week about the longest strike since 1970 by the powerful union against American auto giant General Motors.

The UAW official was right. Americans haven’t seen a real strike in a very long time. But there is some evidence that the US may be headed for a renewed period of labour unrest after a relatively long period marked by the absence of major strikes.

Many would identify a walkout by the federal air traffic controllers in August 1981 as the last significant US labour stoppage.

That strike, then and now seen as a direct challenge to the conservative beliefs of newly-elected President Ronald Reagan, led to the president firing more than 11,000 of the strikers. His firm and unflinching handling of that crisis was one of the defining moments of a presidency that has led to Reagan’s enshrinement as a Republican icon. Even Donald Trump has professed his admiration for the former California governor.

Back to the current UAW strike against GM. General Motors was one of the American auto makers rescued from collapse by President Barack Obama in the wake of the Great Recession in the United States of 2008-09. That move by Obama paid off not only for the many thousands of Midwestern workers in the auto industry, but also for the president. Obama carried both Ohio and Michigan in 2012 in a tough re-election fight against Mitt Romney.

An analysis of the strikers’ current demands appeared in the New York Times. “Workers hired before 2007 make about $31 per hour, and can retire with a lifetime pension. Those hired after 2007 start at $17 per hour and can reach $29 only after eight years’ service. The more recent hires account for one-third of the GM work force.” This inequality is at the heart of the current strike.

GM made a profit of $35 billion over the past three years.

Perhaps the best symbol of the current labour unrest is the massive GM assembly plant in Lordstown, Ohio. This sprawling facility alongside the Ohio Turnpike between Cleveland and Youngstown opened in 1966, and began producing iconic Chevrolet models like the Caprice, Bel Air and Biscayne. Since 2010, production had concentrated on the popular Cruze.

In 1972, amid labour turmoil throughout the country, a UAW strike against GM at Lordstown was called the “Industrial Woodstock” because so many of the (male) workers sported long hair. The 22-day strike cost GM an estimated $150 million 47 years ago. (The Wall Street Journal estimates that the current strike is costing GM $50 million each day),

But the Lordstown plant closed its doors for the last time just over six months ago, and to make matters worse, some of its functions are being outsourced to Mexico. GM had given six months’ notice of the closing, but the reality was a punch to the stomach for a reeling region.

This happened despite Trump reassuring this northeast Ohio rust belt region that the good times were about to roll again.

Big organised labour in the United States has seen a decline in membership and political clout since the famous Reagan action against air traffic controllers nearly 40 years ago. But it retains a seat at the table of major influential Democratic party constituencies. Candidates like Biden and Ohio representative Tim Ryan pay regular homage to the power of labour unions.

Unions like the UAW can still organise and mobilise members to vote, and that’s another warning sign for the current US president that some big trouble lies ahead.