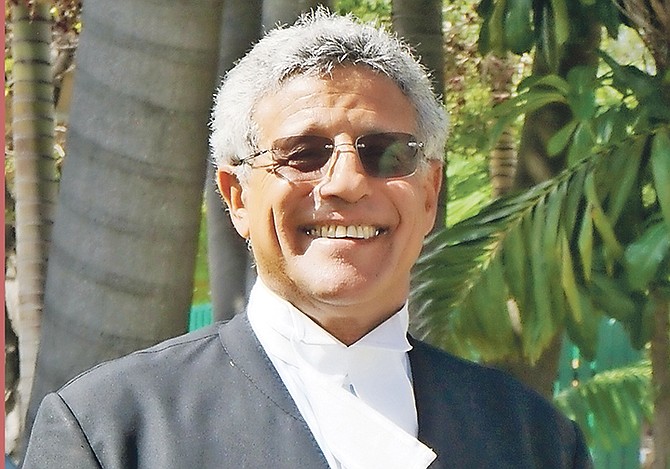 ATTORNEY Fred Smith is recovering in a European hospital after surviving a near fatal paragliding accident in Italy on Sunday that required five-hour surgery.

While paragliding in the Dolomite mountains of the Italian Alps, he dislocated and shattered his left ankle, broke his left tibia, dislocated and sliced his right ankle and broke two vertebrae.

“I’ve had surgery and they saved my life, as well as my left foot which has been reattached to my left leg and pinned together,” he said in a statement to The Tribune yesterday. “I must rest and protect against infection and necrosis of the talus. I’m in the hospital in Bolzano, Italy and being well taken care of. My surgeon recommends that I stay at the hospital for at least another ten days.”

Mr Smith, 63, was celebrating his birthday.

“My greatest risk now is that I might get an infection and or necrosis in the talus bone which the tibia sits on,” he said. “As a result of the accident the talus was completely exposed and therefore may have gotten infected. In addition the talus doesn’t have many vascular elements and so the risk of necrosis therefore also arises. So this is now a wait-and-see game in the short-term. If the heel heals, all will be good with just a substantial limitation in the range of motion. I will then only be able to do half marathons! If it does not heal, then they will have to amputate my talus, which will bring more complications.”

Mr Smith, who said he initially planned to hike, do yoga, meditate and get massages on his trip before a hotel concierge told him about paragliding, said his instructor was injured during the glide and that the two fell from a very high altitude.

“It may have been the sudden thermal that collapsed our parachute and we free fell,” he said. “Probably the only reason we’re alive is that we were lucky enough on the way down to have been blown hard against a cliff where we clung on until some hikers managed to get to us and helped to hold us up until a rescue helicopter airlifted us out. The helicopter had to hover above us as it lowered two medics to us and put us in body bags and pulled us up. I was so glad that the line and hook on the helicopter didn’t break as we were taken off the cliff side. We were 9,000 feet up.”

Mr Smith said he was consumed by shock and didn’t feel much pain at first as his tibia bone broke and protruded and his left foot bled and dangled.

“Flying commercial is not an option and flying at all in the condition that I’m in now isn’t appropriate because of the continuing care that I need,” he said. “I will be missing in action for a little.”

The well-known lawyer has been at the centre of fierce debates about immigration policy in the country, recently saying the government cannot take away the property rights of Abaco’s shanty town residents.

Godspeed to the greatest Bahamian living today, perhaps since independence. Rest up and heal, your country needs you!

Don why you say that?

No matter what one might think of Fred Smith, there is no reason to malign the gentleman when he almost died!

Lucky dude beh! Dangling 9,000 feet up on the side of a cliff. My heart would've given out for sure!

Wishing you a speedy recovery Mr. Smith, we need you to keep speaking-out on human rights and environmental issues, for all our sakes, and before we all lose our rights as citizens of the Bahamas and the world.

If the 'Most' Learned' Comrade "King's Counsel" Freddy, does a legal once-up on populaces elected government and the government does nothing engage their own most learned to use the same legal avenues to take action upset court rulings obtained by the "King's Counsel," - how is that Freddy's fault ... A speedy and full recovery, "King's Counsel.".... Obviously a mere Queen's Counsel, likes colony's AG Carl Wilshire, is no legal equal to a more, most learned King's Counsel ...

Good to see he was celebrating while the supposed people he cares so much about suffer, indeed it makes me wonder if the "paraglider" was not one of the Vultures (perhaps an Italian Cousin) currently circling The Mud that simply wised-up to be used for personal self interest and decided to shed it's load out of basic moral and ethical pride?!?

I read this on social media but I truly thought it was fake news. Wow!

Think it’s a warning as I says on another post that he needs to slow his role or he’ll get a personal ‘Dorian’. Seems my words did not fall on the ground. This man is a menace who uses his knowledge of constitutional law to help illegals to break it.

The next time he may not be so lucky.

Wishing a safe and quick recovery. You have had a traumatic experience!

When one gets a second chance, one must surely change for the best. Thanking God he is.

Wasn't surgeons; rather the level of Disaster Preparedness the Municipal Authority adjacent to the Dolomites has implemented as a result of the increased upper-strata Gael activity over the past two decades.

The millennium has witnessed ever stronger winds traversing those mountains, caused by the remnants of Great Atlantic-Gaels, which traverse the tropics, skirt the Americas, +if powerful enough+, regain strength as they passover Ijsland heading for Europa. Those winds then are channelled by the Highlands of Scotland, the Pyrenees, the great expanse of the River Rhine Lowlands, toward the Alpine deadend. Remember: the Airs are layered by temperature, pushed by pressure. Air pushed upwards by the rising landscape, no matter what the temperature, it goes upward. Up and over. But? Once over the summit it falls right back into its allotted layer, at X meters above ground, etc. Downdrafts move fast Volk in your parts will know a feeling one gets immediately prior to the heavens opening up with the rainstorms? Mild in comparison, but the falling H2O creates the same effect. Since the millennium, therefore, only the MOST EXPERIENCED paragliders attempt those jumps in September October. Last year, in response to statistical evidence from surrounding public health facilities, the Civil Code was altered. The new Code Civilé requires all paragliding public to fix-to-their person, one (extra) PMR Radio.

PMR Radios are licence-free radios that can be bought for €20.

That's because Italy are working both on prevention AND toward safer and more efficient rescue ops.

Problem in recent years has been the high number of paraglider in the Dolomites. Rescue choppers have not been able to attend rescues because of airspace congested with free-flight paras.

“When the helicopter arrives, the area is expected to be free,” Rescuers said. “It is very, very important that this dedicated channel is used properly: it must stay silent all the time and it must be used only for safety communications.

“This means having a second radio dedicated to this channel is absolutely important. This radio must be always tuned on the safety channel. Never transmit on this channel unless you need to coordinate a rescue operation. In this case you will have the advantage of being able to talk directly with the rescue operators on the helicopter.

“If we use this tool properly, it will certainly help everybody: the people who need rescue, the rescue operators and our community of free flight fellow pilots who will still be able to visit and fly in a unique area.”

Imagine the Ba-Ma`n having that forethought?