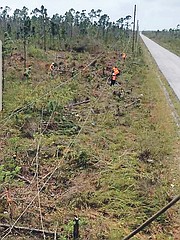 BPL workers in action tackling the damage after Hurricane Dorian.

BAHAMAS Power & Light has confirmed the arrival of a 1,800-kilowatt generator in Abaco, weeks after Hurricane Dorian destroyed most of the utility provider’s infrastructure on the island.

A press statement released by BPL said the generator, which was landed in Abaco on Monday, is expected to be installed and powered at the Wilson City Power Station (WCPS) by the end of this week.

The powerful Category Five storm, which devastated Abaco and Grand Bahama more than three weeks ago, flattened homes and businesses, while destroying a number of power lines on both islands.

Earlier this month, BPL described the electricity situation in North Abaco following Hurricane Dorian as “dire”. The power provider added that the entire transmission grid from Marsh Harbour to Treasure Cay would need to be rebuilt.

Meanwhile, in South Abaco, although the conditions were not as severe, electrical repairs still needed to be made by the company.

Since then, BPL has been making much progress in restoring power to the storm-ravaged island. According to the power provider, all transmission lines leading from WCPS to Sandy Point were expected to be installed by Wednesday.

Once completed, BPL noted, the commissioning process will then begin.

Subsequently, restoring transmission lines between WCPS and Marsh Harbour will be the next area of focus for the power company.

“Once we get a transmission line back up in Marsh Harbour, we will rebuild a line to pick up critical infrastructure, including the hospital, the government complex, the air and sea ports and the Water and Sewerage Corporation of the Bahamas plant. Given the extent of the damage to this part of the grid, we expect this process to take some time,” BPL added.

BPL is working with Caribbean Electric Utility Services Corporation (CARILEC) during this restoration and rebuilding process. In fact, teams from CARILEC are expected to be in Abaco in the next 10 to 14 days.

“We will have CARILEC split off to work on the transmission line between Treasure Cay and Little Abaco, which will also take significant time to build. CARILEC is prepared to field 58 linesmen from nine utilities for whom they have already received all the necessary paperwork, with verbal commitments from a further six utilities totaling an additional 30 workers,” BPL said.

The journey ahead in restoring power to Abaco will not be an easy feat, but BPL maintains that its “commitment to rebuild better and stronger remains firm.”

Caribbean power companies? Seems utility companies in Florida would be much closer and better able to send supplies. West Palm Beach is a mere 200 miles from Marsh Harbour. Caribbean companies over a 1000 miles. My math wrong?