DIANE PHILLIPS: The Mudd shows two sides to every story 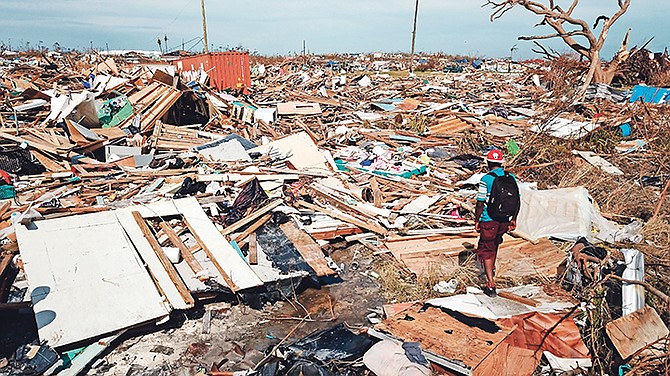 The extensive damage and destruction to The Mudd from Hurricane Dorian. Photo: Gonzalo Gaudenzi/AP

IF ever there were proof that there are two sides to a story, it’s in the history of The Mudd, a community obliterated by the flood waters, swells, surges and winds of Hurricane Dorian. The Category 5 storm of historic proportions took an untold number of lives and wiped out a shanty town that more than 1200 people called home.

Many of its residents worked by day in magnificent residences worthy of magazine covers. By night, they retreated into a no-man’s land of substandard housing, nailed together wooden shacks interspersed with the occasional modest cottage. No matter the state of construction, home was home.

Then along came Dorian. And suddenly eyes shut tight were opened wide.

We may never know how many lives were lost – men, women and children swept out to sea or buried under the rubble.

Hurricane Dorian did more than steal lives, homes and a way of life. It robbed Bahamians of the complacency in which we deluded ourselves into ignoring what was right before our eyes, that there are two worlds, one of the immigrant community, including those who have every right to be in The Bahamas, and another of the rest of the born-here entitled population.

Unlike any event or incident before it, Dorian laid bare the catastrophic consequences of the failure to come to grips with “the immigration problem”. It is that – the failure to deal individually and comprehensively, legally and socially, with a growing immigrant population. The result was an increasing number of marginalised residents living marginalised lives, unempowered, unbanked, uncounted. When the Prime Minister personally begged residents of The Mudd to evacuate, where were the people who did not officially exist supposed to go?

Let’s be honest. Few subjects arouse more emotion in this country than immigration. It has become a for-or-against proposition rather than a level-headed business, legal, social or cultural discussion.

Mention immigration and even the most articulate people lose the ability to express themselves. We do not stop to consider where a dying Miami would have been had it not been for a swelling Cuban and South American population. We forget how growing numbers of Jamaicans and Indians added to the Canadian economy. We resent people from abroad, even though at one point we all came from somewhere else, rich or poor because they are either stealing our land, infiltrating our culture, or taking jobs (even if they were jobs we did not want).

So it was with great interest that a taped conversation surfaced this week that shed light on the history of The Mudd. The individual speaking was Bernard Swann, former police constable #1414, now retired and living in Exuma. Mr Swann was calm and well-spoken. Nothing he said indicated that he was anything other than objective, though he is also known to have strong political affiliations. In the 1950s, he explained, a well-known Abaconian brought in Haitian labourers to work the family’s farming interests. Over time, he granted them land. It wasn’t the most desirable piece of God’s green earth, but it was theirs. They have the papers to prove it. The land was in what we call The Mudd. So how do you kick people off land that was rightfully theirs?

Dorian did what no politician ever had either the political will or the testosterone to do – it levelled a shantytown where unsafe buildings rose on property that was and still is privately owned. That combination created a complex legal maze that was still making its way through the courts with no clear solution in sight when Dorian came along and delivered the knock-out punch.

Moving on after history and tragedy collide

If the past was as legally and socially messy as the muddy area where history and tragedy collided, the critical decision before the nation now is how to move forward. The Mudd is -- and will likely forever be -- uninhabitable for a myriad of reasons, not the least of which is the gruesome consequences of living atop what could be a gory and unforgiving graveyard.

A monument and meditation lake should be created in its place. And the displaced who owned land must be granted Crown Land in an area suitable for living and raising healthy families. For those who employed Haitians and others in The Mudd, including many in the exclusive community of Baker’s Bay who genuinely want to help, there must be an opportunity to share ideas for redevelopment with dignity.

New materials, including hurricane-resistant modular housing, will make construction of safer residences faster, easier and more cost-effective. Nothing should be off the table, including multi-storey dwellings. And those who will reside in the new town with a name far more glamorous than The Mudd, maybe even The Forest or The Phoenix, must have a seat at the table.

The tragedy of historic proportions named Dorian has forced all of us to pen a new chapter and to do so or once again we will close our eyes and pretend until the next time there is a cultural volcanic eruption.

In a distant future, history will record both the ugliness of what Dorian exposed and the opportunity it invited – a fresh start in Abaco in which those who build new communities do so appreciating that the Haitian population is very much a part of the Bahamian population and has been for longer than this country has been an independent sovereign nation.

Of the two sides to every story, there is one common bond. Both sides hurt. Healing will happen when each one looks another directly in the eye and somehow across the divide finds a way to connect and slowly feels a smile start to spread across what was once an angry or lonely face.

Thanks to the Rev CB Moss who called to correct location of John Chipman Street which is slightly further south in Grant’s Town off East Street running to Collins Wall, not between Collins Avenue and East Street as I said in last week’s column. And the name was changed a few years before 2016. The pastoral leader of Mount Olive Baptist Church is a great resource for historic information.

I actually expected to read about two sides...call me an optimist.

What I read was about marginalized but entitled immigrants, their entitled offsprings and their land. And worst of all, the implication that they were essentially without choice in regards to staying in their homes versus designated, and publicly known, shelters.

I'm still an optimist, and hope that part two will cover marginalized Bahamians who have no say in any of this, the impact on their offsprings and governments that ignored them. And also the perspective of the "other" landowner. The Guardian covered a story in 2010, where his efforts were squashed, without justification. And today, he claims death threats forced him into inaction.

A lengthy unbiased piece that lays it all on the table, would provide real insight and also an interesting read.

What a load of leftist open borders hogwash.

Phillips can't even see her own face when she looks directly into a mirror.