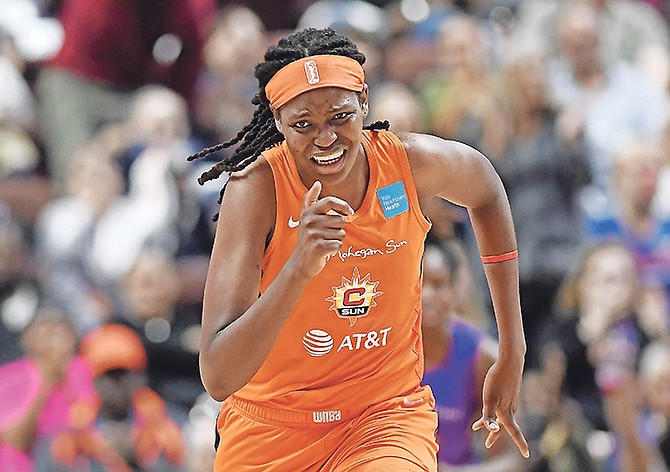 Sun’s Jonquel Jones runs hard in the second half of a WNBA playoff game. Jones and Connecticut are set to go head-to-head against the Washington Mystics and the reigning league MVP - Elena Delle Donne - in game one of the WNBA Finals 3pm Sunday. (AP Photo/Jessica Hill)

The matchup for the 2019 WNBA title tips off this weekend and Jonquel Jones’ Connecticut Sun are set to go head-to-head against the Washington Mystics and the reigning league MVP - Elena Delle Donne.

The Mystics will host game one in the best-of-five series at 3pm Sunday in the Entertainment and Sports Arena in Washington, DC. They will also host game two at 8pm on Tuesday, October 1.

Washington makes their second consecutive trip to the finals after they were swept by the Seattle Storm in 2018 as Delle Donne struggled through a bone bruise. The Sun make their first appearance in the finals since 2005.

The Sun won the head-to-head matchup between the two teams in the regular season 2-1.

The Mystics won the third matchup on June 29, 102-59. Jones finished with 15 points and seven rebounds while Delle Donne posted a double double - 19 points and 10 rebounds.

“They have a little bit of a chip on their shoulder. This group has truly taken that chip that we have been called a team without mega superstars,” Sun head coach Curt Miller said. “A team that has great balance and can win in different ways. We’ve won a game [in the semi-finals] because our post-game was dominant, another night it was our backcourt and it was fun to see it all come together. It is a team that fits together and I think you are seeing stars blossom in this playoff.

“The lights are shining on these guys that probably don’t get enough credit but it’s a very versatile team and we can win in different ways and that’s what’s been fun to watch.”