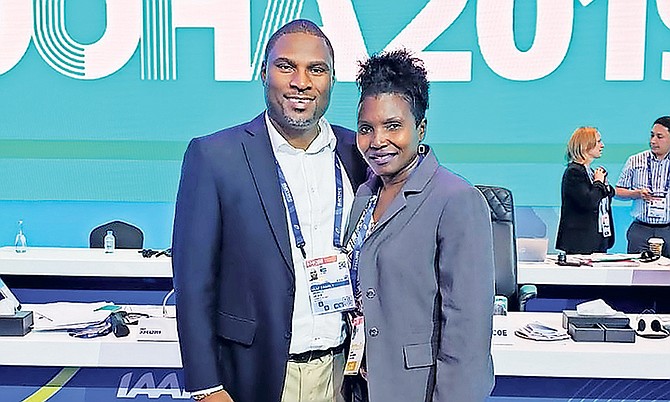 DOHA, Qatar -- After serving for two consecutive terms as a Councilwoman of the International Amateur Athletic Federation, Pauline Davis-Thompson's tenure will officially be over at the end of the 17th World Championships here on Sunday, October 7.

Davis-Thompson, in an interview with The Tribune at the Khalifa International Stadium, said she has no regrets about her achievement.

The interview was conducted on the 19th year anniversary on Sunday that Davis-Thompson would have won the silver medal in the women's 200 metres, but elevated to gold after disgraced American Marion Jones was stripped of her victory at the 2000 Olympic Games on September 28 in Sydney, Australia. It also came two days before the actual date of September 30, 2000 when Davis-Thompson along with Sevatheda Fynes, Chandra Sturrup, Eldece Clarke-Lewis and Debbie Ferguson were crowned the "Golden Girls" after their gold medal performance in the women's 4 x 100m relay at the same Olympics.

"I was really, really sad when I learned that it was coming to an end because I know that there is so much more that I can give to the world and to the sport of track and field," Davis-Thompson said. "I was so surprised when I got this amazing award and I am still in shock. It feels like I am living a dream and that it is not a reality because there are very few persons and only one other woman to receive the award."

During the IAAF Congress, Davis-Thompson was named as an Honorary Life Person Member of the IAAF, a recognition that was bestowed upon her by Sebastian Coe, who was re-elected as the IAAF president.

"I didn't know that I had worked that hard and as recognised that well by my peers in the IAAF to receive such a recognition," Davis-Thompson said. "I am just humbled and honoured to be recognised in that manner."

As she prepares to demit office, Davis-Thompson said she will continue to serve as a honorary member of the IAAF, which will afford her the rights to receive some of the perks that she did as a council member.

But her aim is to continue to work with the IAAF in promoting the sport and through her role as a consultant with the Ministry of Youth, Sports and Culture, more specifically in the Bahamas.

However, she noted that not having gained the support of the Bahamas Association of Athletic Associations and the Bahamas Olympic Committee, she's not sure to what extent she will make her contribution to those bodies at home.

"I am grateful to the Davis family that raised me and provided me with the support from the start of my track and field career as an athlete all the way to serve at the highest level of the sport in the IAAF.

"I also want to thank the BAAA for providing the platform for me to get to this level because without them, I don't know if I would have accomplished it. So I am grateful to them as well."

Davis-Thompson said now that her reign is coming to an end, she will also focus more attention on the launch of the Golden Girls Delite Smoothies, a nutritional product that she has already introduced to the Bahamian public at the Farmer's Market.

But if there is one thing that Davis-Thompson would like to see in the Bahamas, it would be a sports academy where the local athletes can be properly groomed, not just in competing, but presenting themselves so that they can be well-rounded ambassadors for the country.

"I'm going to try and open my mini sports academy, but I'm hoping that the Bahamas Government will see the need for us to really get it together and get a proper sports academy with a weight room facility so that our athletes can get the full benefits of training at home," she said.

"So I will be selling my smoothies and working on ways to get the sports academy up and running. I don't know how I will achieve it yet, but I'm hoping that corporate Bahamas will come on board and help out."

As she prepares to close another chapter in her illustrious track and field career, Davis-Thompson will cherish the three Olympic medals - the other being a silver on the women's 4 x 00m relay in Atlanta, Georgia in 1996.

From the IAAF standpoint, she would have won a gold medal with the Golden Girls in Seville, Spain in 1999 and a silver in the 400m in Gothenburg, Sweden in 1995. She also earned a silver and bronze in the 200m at the IAAF Indoor Championships in Barcelona, Spain in 1995 and Maebashi, Japan in 1999.

The 53-year-old graduate of the Government High School and the University of Alabama, was first elected as an IAAF Councilwoman in 2007. She was -re-elected in 2011 and 2015.

However, because of the election of Mike Sands as the new president of the North American and Central American and Caribbean (NACAC), Davis-Thompson could not be re-elected as the IAAF constitution doesn't allow for two members of a country to sit on the executive board.

As the NACAC president, Sands will serve as a member of the IAAF's executive board. His position will take effect following the completion of the championships.

In departing, Davis-Thompson said she holds no ill feelings towards the BAAA because she enjoyed her tenure in the IAAF's office. She's not sure if she will be accepted to serve as a member of the BAAA executive, having served on the IAAF board.

She also noted that after attempting twice to become a member of the Bahamas Olympic Committee, she's not sure if she will pursue that either because she believes a "profit is not accepted in her home."

But she said if the opportunity presents itself for her to serve in any capacity in the future, she will be more than willing to step forward for her beloved country, the Bahamas.