Insight: Hooray For Carnival, But Where’S Our Environmental Protection Laws? 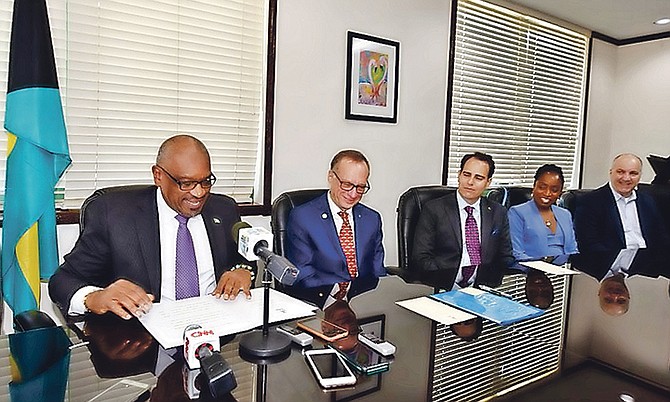 Prime Minister Dr Hubert Minnis at the signing of the heads of agreement with Carnival for a $100m cruise port in Grand Bahama.

IT was just a few months ago that the Minister of Environment and Housing labelled Carnival Corporation’s dumping scandal “environmental savagery”. And yet all seemed to have been forgiven when Prime Minister Dr Hubert Minnis was present for the signing of a heads of agreement to cement the $100m mega cruise port deal in Grand Bahama.

Just to give a quick history lesson, in February it was touted as a plan to construct a cruise port that would lead to 1,000 construction jobs by 2021 – a much-needed boost to the hobbled economy of Grand Bahama. This was great news for the community, as well as seeing the government follow through on one of its campaign promises – to revitalise the economy of the nation’s second city.

After nearly two decades of low-to-no economic growth in Grand Bahama, citizens became excited about the “magic” returning to the nation’s second city.

Unfortunately, though, two months later, we were brought back to earth when The Miami Herald broke the news of Carnival’s illegal dumping in Bahamian waters. Horrifying reports of 500,000 gallons of treated sewage and 11,000 gallons of food waste mixed with plastics, aluminium, and other physical objects – all taking place while the cruise company was already on probation for previous offences – were covered extensively in international and local media.

Leading to quite a stir, the government, in reaction to the dismay of the Bahamian people, offered its usual textbook response. In short, they said it took the matter very seriously and they would investigate the allegations. Obviously, this was a strange course of action, as the allegations were already investigated and litigated in a Florida court, leading to a $40m fine for its reprehensible environmental practices. Nevertheless, despite promises that environmental protection laws would be brought to Parliament by the end of summer, the summer came and went without any such legislation being tabled in Parliament.

And then Dorian happened. Showing up the systemic issues of The Bahamas, we are left clawing uphill in the aftermath of Hurricane Dorian.

Now, with the recovery and rebuilding efforts of Abaco and Grand Bahama becoming the number one priority for the government, environmental protection seems to be even less of a priority.

Just over a week ago, Environmental and Housing Minister Romauld Ferriera’s declaration of a climate crisis, at face value, seemed as if the government finally understood the impact of climate change on the region and would have the political will to establish a comprehensive policy to police hazardous business practices. However, the lack of any definitive measure coming out of the Carnival dumping scandal and the prime minister’s resolve in squaring this deal away without such legislation could result in the government cutting off its nose to spite its face.

First, we all recognise the need to assure the international community that The Bahamas is still open for business. But at the same time, let’s not delude ourselves. What we’ve learned about Carnival leaves cause for great concern.

Carnival’s well-documented record of environmental degradation is public knowledge. And regardless of any fines or probation, it has been a repeat offender.

Conduct sketchy business practices. Get caught. Cough up a fine. Offer an apology and a promise to do better. Rinse and repeat.

This mode of doing business should heighten the discomfort for any country doing business with Carnival – a company unhindered by the litany of disciplinary measures levied on it in the US. The fear that Carnival may continue on its track of carelessness is a real one. And the Bahamian citizenry ought not fall asleep on this with the fragility of our environment never more evident than it is today.

While the economic reboot of the affected islands remains a top priority, the directorate should move cautiously to avoid exacerbating environmental issues. What good will 1,000 jobs do when there is nothing left but devastation and the perfect clarity that hindsight brings - where we all mull over what we could have done to avoid another tragedy?

Our government’s response to the Equinor oil spill was another glaring example of the lack of appreciation of the severity of environment hazards and does not engender confidence that these issues are taken seriously.

Nevertheless, Carnival Cruise Lines did not cause Hurricane Dorian, nor are they responsible for the Equinor oil spill. Additionally, their commitment to The Bahamas amid this period of instability is heartening and should be applauded.

However, we must recognise this isn’t charity. They are investing in The Bahamas because they see an opportunity. Taking that into account, with the country being the latest casualty of the impact of climate change, the government has to decide which side of the fight it is on. Moreover, they must understand that a hard stance can be taken on preserving the environment without turning away business.

When we look at the devastation suffered at the hands of Hurricane Dorian, much of it is largely due to a lack of preparedness and organisation on the part of the government and NEMA. Surely, they could not prevent the wrath of mother nature. Nor could the government know the level of destruction that would be sustained on Abaco and Grand Bahama. However, seriously examining the effects of climate change and determining an economic policy that does not exist in a vacuum, separate from a well-thought out environmental policy, perhaps could have mitigated some of the losses we’ve experienced. And going forward, that is what should be considered before entering into deals that potentially make us more vulnerable to climate change.

Carnival, while publicly maintaining it is committed to becoming a better environmental steward, still has a long way to go to earn our trust. In the meantime, the government’s focus needs to be on protecting the country. How this will be done remains to be seen as talk hasn’t necessarily led to any meaningful action.

Moreover, the urgency by the government to spur economic activity in Grand Bahama after the hurricane may have led them to surrender any leverage they would have had in previous negotiations. Unlucky for us, the government being mum on Carnival’s bad deeds in recent months certainly indicate its avoidance to ruffle any feathers with our new partners.

While both sides seem happy that the ink is dry on the deal, the Bahamian people will have to wait until the heads of agreement is tabled in Parliament to see exactly what was negotiated on our behalf.

We certainly hope that the government has acted in our best interest.

Mr. Stachan, your concerns are well founded. I'm sure your take on the matter would be different if you were involved in the negotiations. Then, you would have to weigh the briefcase of money from Carnival, against the good of your people. Given that so few Bahamian leaders have turned down the suitcase, we are left exactly where we are at present. Read the papers. Study the losses to the people. And, then wager what it will take to change the generational descent into the current situation of pervasive corruption. Personally, I don't think The Bahamas will manage this prior to the country losing most of it's citizens to rising waters. Just saying.