Pair Who Were Missing At Sea Are Safe In Cuba 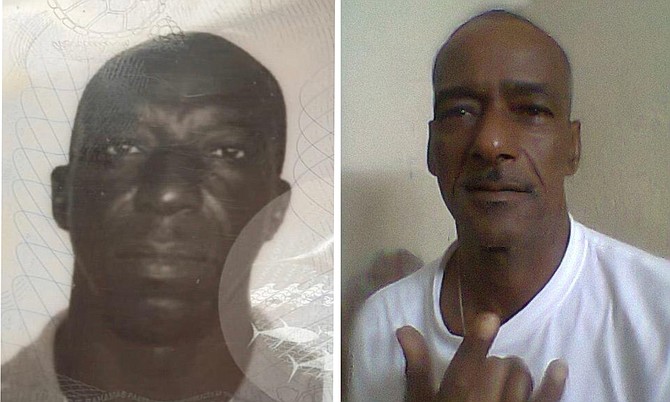 CICELY Armbrister can now sleep peacefully at night knowing that her husband, who was missing at sea for over a week, has been found and is safe in Cuba.

Dwayne Armbrister, 54, who was last seen in Andros on Thursday, March 26 with another Andros native named Peter Taylor, went missing on a fishing trip off Mangrove Cay.

It was a family’s worst nightmare, relatives said, after not hearing from the fishermen for more a week.

“My mind wasn’t at rest; even though your body was physically tired when you lay down, it was hard to even close your eyes,” Mr Armbrister's wife told The Tribune.

“But my mind was continually going because the ocean is so big. The only thing to do is to turn to God and ask God, this is in your hands. It was beyond human control. It was a lot to deal with.”

This hope unexpectedly came in the form of a phone call from Cuba, more than a week after the duo went missing.

Describing the special moment family members realised Mr Armbrister was alive, another close relative, who did not want to be named, told The Tribune: “I received a call from Cuba on Monday afternoon. When I looked at the number, I said to myself that ‘this number don’t look like no Bahamian number.’

“I wasn’t going to answer it but I said ‘man, you know what answer the phone because that could be Dwayne’ and when I answered that phone and the (man) said ‘this is Dwayne and I’m in Cuba’ and I said ‘ Praise God.’

“I didn’t know what to do and then the call cut off. It wasn’t an opportunity to speak for long because whatever phone they were using, they couldn’t be on the phone long because the call dropped.

“Shortly after that, I got a call from Peter Taylor's family saying, ‘you got the call’ and I said yeah.”

Asked how the family now feels knowing that Mr Armbrister is safe, relatives said there are no words to describe the feeling.

“I can’t express the relief. . . it’s been a hard experience,” one relative said. “My head hurt. My stomach was hurting me. I felt off. I fell on the ground when the call came.”

Meanwhile, Mrs Armbrister added: “I mean everyone is pretty much rejoicing. (But), I am relieved because it’s something that was plaguing my mind and I am thankful to God that they were found.”

Mrs Armbrister also told The Tribune that the family has contacted the relevant authorities to notify them of her husband’s whereabouts.

She said while the family understands that her husband might not be able to return home right away due to the COVID-19 travel restrictions, they are trusting in God to keep him safe abroad.

“If he comes today, or tomorrow or next month, it’s all God. He’s an on-time God and whatever he does is well done,” she said.

Amazin’! What a great story!

Man that boi is a Armbrister, we ain dumb. But thank God!

Have a Cuba drink on me salud

Can't wait for the story. Only cause of the happy ending.

Wow that is surely the best news told in weeks! God is good

Good news in the worst of times is always greatly welcomed.