Bahamas Embassy 'Unfit' For Use 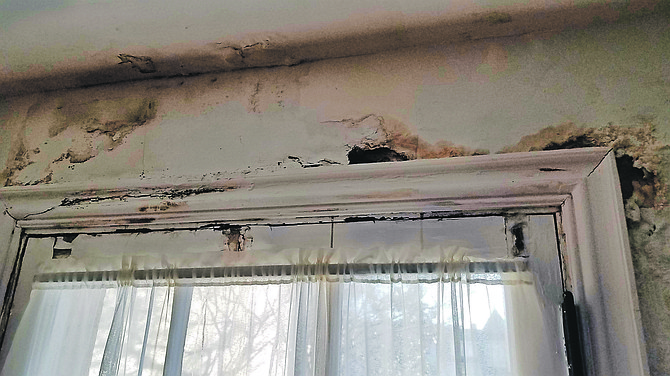 Some of the disrepair in the embassy in Washington DC.

BAHAMIANS living in the Washington DC area are upset about the dilapidated state of the Bahamas Embassy, deeming it unfit for people amid the COVID-19 pandemic.

Tribune sources in Washington say that for years the embassy has been in this state of disrepair and has escaped the “to do” list of successive governments.

“As Bahamians living in this area we are totally embarrassed that our embassy looks the way it does,” said one source.

“We are tired of complaining about how our embassy is not fit for humans to be (in). I am surprised that the Ministry of Foreign Affairs has not sought to fix this building, after all it is owned by the government of the Bahamas. International guests cannot be greeted there because of the state of the building. It is deplorable.”

The Bahamas Embassy is situated at 2220 Massachusetts Avenue, North West, Washington, DC, an area known as Embassy Row. The property was purchased in 1974. It is approximately 100 years old and was originally a private home.

When contacted recently, Minister of Foreign Affairs Darren Henfield brushed off the concerns, and told this newspaper to contact the Bahamian ambassador in DC.

“In our current environment right now, where we are managing crisis after crisis in this pandemic the world over, do you think this is the time to be entertaining something about the disrepair of an embassy?” Mr Henfield asked. “It is amazing to me that if Ambassador Collie, who works there, is aware of the existence of mould in his mission that he would not seek to remediate it. I know him better than that. There are several companies in the US that can do it. We had it done right here at (Ministry of) Foreign Affairs and in other places where we thought there was an existence of mould and we had it scrubbed.”

When contacted, Ambassador Sidney Collie agreed with complaints that mould in the building could compromise immune systems. He said the government has approved spending to get rid of the mould.

He said during a recent interview: “I agree that due to the mould in the building our respiratory systems are now compromised. The basement of this building is infested with mould and so is the conference room. We no longer go in those areas of the building. No one can be in those areas. The basement was our eating area. We can’t go there. The mould is very pervasive.

“The government has approved the $85,000 to have the remediation done. It has been wired to the embassy’s account so we are just waiting to move on it after this virus goes away.”

Ambassador Collie admitted the building has fallen into a state of disrepair. He said it is in an unsatisfactory state and no government has done anything to repair it.

Only 30 reached Abaco there must be one lying around

They government workers ,they can at least build them a little trailer park !

At least the government is consistent in its upkeep of buildings under its authority!!

But this building is in WASHINGTON!! I’ve been in a few D.C. embassies, most of ‘em are beautiful.

You has now the conditions have become so UNFIT for human Habitation to cause the governing party's own comrade political appoints to have to speak out, knowing damn well they just shortened their longevity stay in Washington DC... but won't be allowed re enter Colony?
Whilst others known do it, lots but pictures evidence, don't lie. Nod once for yeah, twice for no?

Don't remedy it until you discover the reason why mold is growing. Mold needs moisture to thrive. The moisture source is most likely an old pipe. It may also be wise for the embassy to hire a mechanical engineer to design a modern day HVAC to eliminate humidity that may buildup in the Embassy from time to time.

Wiw. Ambassadir Collie seems quite sensible and reasonable! acknowledging that something is wrong and a plan to fix it. Thank you ambassador. Thats all we ask. We don't expect miracles...not often

This is terrible. The government should immediately spend at least $20 million to fix this instead of helping Bahamians who are suffering in Bahamas right now (spoken in my MP's voice)

Can I hear you say it in voices of Abaco's two House MP's, who also sits up cabinet room?

Believe me, you don't want $20 million or even $85,000 wired to a bank account under the control of Sidney Collie.

No, believe me I am much less concerned with His Excellency Ambassador Sidney's plea respiratory systems be shipped Washington than I am that we have more than sufficient respirators and ventilators available at our hospitals to keep virus compromised patients breathing,
Shouldn't we have been seeing itemized location reports as to the total number residents who have died over the previous Four months, from all causes, while living across colony at both government supported and private Long-term Care Homes and Care facilitates, Prison, Detention Center, In Constabulary Custody and Sandilands. Nod once for yeah, twice for no?

Look on the Brightside the power probably won't go off.

I wouldn't bank on that....peak summer demand will be much lower if hotels stay closed....but lack of proper maintenance by BPL, even on their new equipment, remains an issue.

Uh ... mudda ... the building under discussion is in Washington, D.C., not Nassau. The power supply is pretty stable in Washington. The bills are pretty low, too.

All our government leaders should be ashamed (1974-2020), in the USA all and every material needed for the upkeep is either readily available or easy to find and is cheaper than when living in Nassau so there is no excuse for our embassy to be in such a state. When looking from outside we are only a front but when looked at from inside we are fake.

The Tribune should now publish a few photos of the exterior and interior of the residence of our ambassador to the US in the DC area.

Collie and Henfield are both out of touch. Really who expected more??. the blind leading the blind.

If this Embassy was a ship carrying a Bahamian flag this would be a case to put it out in the ocean and put it under Quarantine ..noone allowed to enter it ...and no port allowed it to dock.....including the Bahamas Govt.ports..!!!!

We Colony 700 hundred islands and cays commerce and tourism has come to complete halt, so why not cut expenses by closing and recalling all Embassies, Consulates and High Commissions political appoints and native staffers.
Shouldn't KP not be reserving funding should there be major spreading virus to at our Prison, Long Care Homes, among Hospital and Care Workers, Sandilands, Immigration's Detention Center and Constabulary Lockups. Nod once for yeah, twice for no?

I just wanna know HOW?? This is in America where building supplies are cheaper than they are in The Bahamas, this is unacceptable and no excuse for this building to be like this. WOW! Disgraceful.

Islandgal - what you mean you wanna know HOW??? Who owns the building??? The Bahamian Government. You figure the rest out......trust me you’ll get to the answer very quickly!

Our embassy in Washington, and for that matter, around the world, is our store front and calling card to the world to come to our country and do business. If the place looks like a dump, you are better off closing them down and not having them at all. Come to the Bahamas, where our Embassy looks like a dilapidated piece of sht. Great way to get people, and companies convinced we have our act together. I know there are many needs in our country and the need is far outstripped by the demand, but this is an embarrassment. Again, fix it up a bit, not lavishly, or get out of town. Better to not be embarrassed and to chase business away, then to be there at all.

It is a ridiculous waste of our tax dollars having these embassies in cities of foreign countries. they achieve practically nothing of any use. Close it down as soon as possible and then have a shared ambassador and embassy with all other Caribbean countries. And before some pedant gets outraged; I do realise that our country is situated in the Arawak Sea or Lucayan Sea or whatever the government decided to rename our bit of the Atlantic.

What, been long while since PMO Sister Erica has issued a single update of the 'Primus inter pares PIA'...War on Over-da-Hill's 'Business poverty'. Nod once for yeah tis truth was replaced by colony-wide commerce shutdown twice for no?

Maintenance and upkeep of buildings is not a strong suit of successive governments. The condition of the embassy building reflects poorly on the country.

On the maintenance and upkeep not being a strong upkeep seems an anomaly in that upkeep and maintenance is cheaper than in incurring full new rental to private owners with ironclad full rental to cover all costs. The full list of all rental properties by Govt costing some $50 million dollars annually to taxpayers needs to be published.

The poor condition of the Embassy and now revealed publictly is indeed poor. In many other ways it seems not to attract the types of investments the nation needs especially as the condition being '" unfit " for use"