Diane Phillips: A Sporting Icon From An Age Of Real Stars

Amid the obsession with lives in peril, saved or lost as a result of the COVID-19 pandemic, the passing of a legend who once stood for the finest in extreme sports, performance and glamour in Nassau nearly went unnoticed.

Race car driver extraordinaire Sir Stirling Moss died on Easter Sunday. He was 90 years old. To Bahamians, Sir Stirling represented the best of a world most could only observe. During the heyday of Bahamas Speed Weeks beginning in 1954 and held almost every year through 1966, Sir Stirling’s driving and his friendly, outgoing style dazzled a crowd of celebrities and those who watched the rich and famous in their cars dressed for speed and pizzazz. 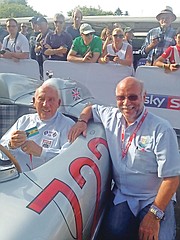 Sir Stirling Moss with FIA Director for Caribbean Development David McLaughlin at Goodwood in the world’s most expensive car.

Bahamas Speed Weeks were the highlight of the social season and Sir Stirling was the headliner of the events. Hundreds gathered to compete or spectate and Sir Stirling never failed to draw oohs and ahhs. Whether racing against foreign entries or fearless Bahamians, Sir Stirling was always at or near the front of the course. He won the Nassau Cup in 1956 and 1957.

It was more than his driving, though, that won the hearts of locals. For the women, he was quite a catch and he had quite an eye. One of his ex-wives, Kate Seiler, still lived in Nassau, but passed away yesterday too, an artistic woman who has made her contribution to the culture of the country. A daughter from another serious relationship is also making her mark in her field. There are roads and lanes named after him. Male or female, young or old, it was impossible not to be won over by his smile, the twinkle in his eye and his genuine love of life. He treated everyone with respect and in turn, they treated him with reverence.

It was in 1955, a year after the first Bahamas Speed Week, that Sir Stirling accomplished his greatest achievement – a feat no one has ever matched. Driving a Mercedes Benz sports car, Sir Stirling powered through the Mille Miglia, miles along Italy‘s curves and hills, single-handedly completing the 1,000 mile course in just over 10 hours without stopping. The car, considered the most expensive in the world, remains in Mercedes museum.

In 1962, Stirling Moss suffered horrendous head injuries in a crash at Goodwood in the UK. Many thought he would never drive again. Through sheer determination and willpower, he beat the odds and was back on the track continuing to compete until just a few years ago.

The old track where Sir Stirling and the likes of the Bethells, Norman Solomon, the Oakes’ and others made their mark in Bahamian race car history is today where the Thomas A Robinson stadium rises. There is a drag racing strip on part of the site. In 2011, when Nassau Speed Week Revival started, another British former race car driver and more recently classic car event planner David McLaughlin lured Sir Stirling back to The Bahamas. With Lady Susie Moss, the wife he treasured until the day he died, he tooled around Nassau as if it were his second home. There were so many who remembered him and reminded him of moments a half century before.

According to an official obituary published by the very formal British Racing Drivers’ Club (BRDC), Stirling Moss “set the standards by which all other drivers were judged, whether in Formula 1 or international sports car racing. His versatility and competitive instincts made him a formidable competitor in any race.”

And a man who young Bahamians look up to as the modern Stirling Moss, the king of the course in today’s faster-than-ever sport of race car teams and extremes, Lewis Hamilton, told his hero as he bestowed him with honorary vice president of the sport for life this: “You have been the ultimate ambassador…”

We thank McLaughlin and his team including Jimmie Lowe and Brendan Foulkes for bringing racing back to The Bahamas and reminding us just how much fun speed, precision and performance can be. We thank them, especially, for re-introducing us to an icon who, for a short while every year, made The Bahamas his home, inspiring us and bringing fame through images sent abroad long before the days of social media.

Sir Stirling Moss, one of a kind.

There is something afoot just off Bay Street not far from The Tribune offices that totally baffles me. It’s called axe throwing. OK, so I am a novice and admittedly know little or nothing about this sport which is, by the way, large enough to warrant having its own federation (which is not surprisingly called the National Axe Throwing Federation). This one in Nassau appears to be part of that since its sign has the NATF logo so not sure what it takes, but if congratulations are in order, consider it done.

Here’s what the sport apparently entails. A thrower picks up an axe – a real one with steel blade and wooden handle – and starting from some point behind the head or neck throws it at a thing up ahead that looks like a dart board. Oh, it’s important to note the thrower is in a cage along a row of cages, each with chicken wire type fencing in between, probably not strong enough to prevent an axe from piercing it but since you are expected to throw forward, not sideways there should not be any errant axes heading straight for your neighbouring competitor’s middle parts.

The sport is apparently gaining traction, especially among those boasting heavy beards. In Toronto, they had a national axe throwing championship recently. More than 190 serious competitors showed up. The place was jam packed, according to the video online so it must have taken a long while to give each player a cage and fair shot.

Maybe they knew something we didn’t – that the world would be searching for a non-team sport that would allow social distancing while letting each player let off steam after being cooped up at home for who knows how long?

Kate Seiler passed away at her home in Montreal yesterday. The former wife of Sir Stirling Moss was well known in The Bahamas after moving here from Canada. After her marriage to Sir Stirling, she married Don Seiler.

A music lover and art patron, she was well known across Bahamian society, and a supporter of many good causes.