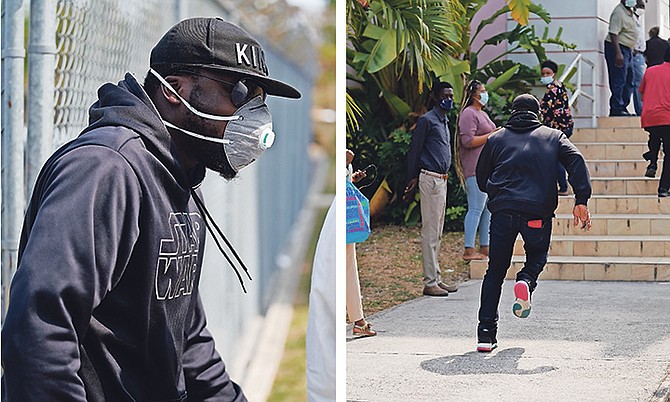 BUSINESSMAN Jonathan Ash was fined $7,000 for selling alcohol in breach of the national curfew and emergency orders put in place due to the COVID-19 pandemic.

Ash arrived at Magistrate’s Court yesterday in a black hoodie, cap, sunglasses and a face mask. Although he was escorted into the building by officers, he was not placed in handcuffs or shackles and was able to dash into the courtroom as he tried to avoid being photographed by the media.

This was in stark contrast with the vast majority of prisoners who are almost always escorted into court by officers with their hands - and often feet - handcuffed or shackled.

The 35-year-old, pictured, who appeared before Senior Magistrate Derence Rolle-Davis, was charged with violating the national curfew and operating a non-essential business on April 17. He pleaded guilty to the charges brought against him and was fined $2,000 or nine months at the Bahamas Department of Correctional Services (BCDS) for count one and $5,000 or one year at the BDCS for count two.

Ash was arrested last week after a video went viral on social media showing a liquor store selling alcohol, despite orders being issued to prevent such stores from doing so, as part of the country’s COVID-19 response. In the footage, store staff in the video could be seen wearing masks while taking orders for beer and rum. A marked police car can also be seen parked near the premises.

The court was told Ash violated the national curfew last Friday after officers found him in the Faith Avenue area around 2.30pm where he had violated the Emergency Power COVID-19 Regulations by operating a non-essential business without permission.

According to the prosecution, on Saturday, April 18 around 4pm, officers were alerted of a video on social media of people violating curfew. This prompted an investigation which led to Ash’s arrest, who was captured on the video carrying alcohol to people and collecting payment.

Ash was arrested and taken to the Central Detective Unit (CDU) where he acknowledged he was the person at the New Manmade Liquor Store. Still, he told police the funds he received did not have anything to do with liquor sales, but were intended to be given to people who had done work for him. He also told officers he was an essential worker who owned a trucking company and had gone to the establishment to secure the business after receiving permission from the owner.

According to the prosecution, Ash was charged because although he claimed to be an essential worker, he did not follow the correct protocol by calling the COVID-19 311 hotline.

In pleading his case, Ash’s attorney, Tamara Taylor-Storr, said her client was married with three children and had no previous convictions. She also noted Ash had pleaded guilty at the first opportunity and was gainfully employed. Insisting Ash had taken responsibility for his actions, she asked Magistrate Rolle-Davis to be lenient and to refrain from imposing a custodial sentence.

Still, while Magistrate Rolle-Davis said he took Ash’s immediate guilty plea into consideration, he insisted the defendant’s actions were a “blatant disregard of the law,” since liquor stores were specifically ordered to cease operation during the lockdown period. Ash was subsequently fined $7,000 for the charges. He paid $2,000 yesterday and was given until Friday, April 24 to pay the balance.

When contacted after the arraignment, Police Commissioner Paul Rolle was asked to respond to criticism that Ash was not handcuffed.

“People are entitled to their own opinion,” Commissioner Rolle said. “I won’t comment on that right now.”

Ash made headlines as the Crown’s main witness against former Cabinet minister Shane Gibson in his bribery case. Ash alleged he paid Gibson hundred of thousands of dollars in bribes so he could receive outstanding government cheques for hurricane clean-up work.

A jury acquitted Mr Gibson of those charges last year.