Dames: No Special Treatment For Ash 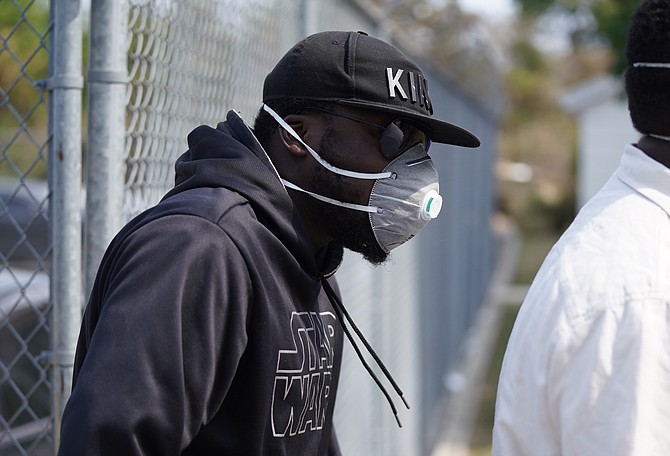 NATIONAL Security Minister Marvin Dames said yesterday that any suggestion Jonathan Ash was given special treatment when he went to court Monday without handcuffs or shackles is “ludicrous”.

He also refused to specifically address the involvement of two officers placed on leave as police investigate their involvement in Ash selling alcohol against COVID-19 regulations, saying the matter is still under investigation and he doesn’t “want to prejudice it in any way.”

However, he said it’s always “unfortunate” when officers are found in contravention of the law, reflecting poorly on their “law abiding” colleagues while causing public distrust.

His comments came days after videos circulated on social media, showing a man at a liquor store selling alcohol and an unmarked police vehicle at the establishment.

When The Tribune visited the scene on Friday, two police cars were observed at the establishment: one exited the street for Carmichael Road and the other exited the Made Men Sporting Bar property even as patrons trafficked liquor without disguise. Another unmarked police car, a white Ford Taurus, was stationed about seven feet from the bar’s door, its tinted windows rolled all the way up and its engine humming. Store staff were also seen wearing masks while taking orders for beer and rum, despite orders from Prime Minister Dr Hubert Minnis’ orders stating that such establishments ought to remain closed during the COVID-19 crisis.

Ash has since been fined after admitting selling alcohol in breach of the national curfew and emergency orders.

The 35-year-old, who appeared before Senior Magistrate Derence Rolle-Davis on Monday, was charged with violating the national curfew and operating a non-essential business on April 17.

He pleaded guilty to the charges brought against him and was fined $2,000 or nine months at the Bahamas Department of Correctional Services for count one and $5,000 or one year at the BDCS for count two.

In a statement released late Monday Commissioner of Police Paul Rolle noted a police superintendent and police corporal in connection to the videos had been placed on administrative leave. The statement added that investigations are ongoing.

Mr Dames said anyone found not obeying the law will be dealt with accordingly and that includes those in law enforcement agencies.

He said: “You have to be, I mean, a person of the highest level of integrity. That’s what we expect and we continue to say that no one is above the law and when you breach it, no matter where you sit, there’s an expectation that you have to be dealt with.

“The Bahamian people expect that and we’re not going to compromise that for anyone.”

Asked by reporters why Ash was not placed in handcuffs or shackles while appearing before court, the minister replied: “I don’t have the answer to that.”

“Come on. You can see the actions taken by the commissioner and his officers. This man was put before the courts almost immediately. It is being alleged that he had broken the law.

“He was charged and placed before the courts. That in itself will demonstrate to you that police ain’t playing no favourites and to even suggest that is nonsense. This is an ongoing investigation where persons from within are impacted as well.”

While not specifically addressing the two officers, Mr Dames said while the majority of law enforcement takes their job seriously there are some who “are hell bent on creating mischief.”

Mr Dames said he hopes the investigation will soon be completed and the matter quickly resolved.

The masterful liar is at it again. He must believe he is a King of something. only God knows what No Games is king off.

he is to be feared though.. Frank Smith. Gibson and the other Smith. not many can afford Kings Counsels..

The masterful liar is at it again. He must believe he is a King of something. only God knows what No Games is king off.

he is to be feared though.. Frank Smith. Gibson and the other Smith. not many can afford Kings Counsels..