Face To Face: Rhonda’S Standing Tall On The Shoulders Of A Woman Who Pointed The Way 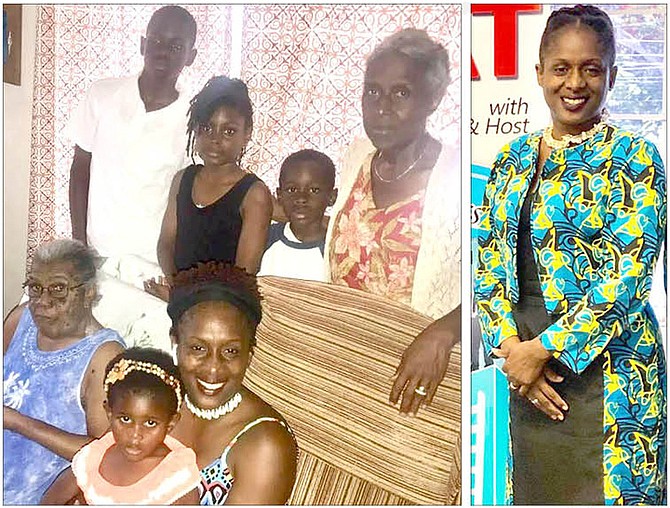 While schools throughout the country have adapted to the COVID-19 pandemic and subsequent lockdown by moving their classes online, one school has found that years of providing an online learning experience for its students is paying off. Akhepran International Academy has had to move its classes completely online, but the technological foundation it laid from the start made it a much easier transition. Principal Rhonda Wright (nee Lightbourne) told me Akhepran has been a BYOD (Bring Your Own Device) school since the very beginning. Now in its ninth year of operation, Rhonda credits the school’s founder Dr Jacinta M Higgs with having a vision that put the school ahead of the curve as organisations around the world reach for the internet to stay connected when person-to-person interactions are estranged.

“We have used several online educational platforms over the years, transitioning to Moodle about four years ago,” Rhonda explained.

“The advantage of already using this platform as a major teaching and communication tool is that we were able to transition immediately to remote learning. We have essentially successfully transferred our brick and mortar school to the Akhepran Online School. We have an online timetable which our scholars are required to follow. School begins online at 7:30am with a live guided silent time and assembly. Live classes begin at 8.00am and continue until 4.30pm. The day ends with a homeroom period with each grade level. Akhepran Online School has continued uninterrupted since March 18 with daily live classes, projects, assignments and quizzes with our teachers and scholars.”

That in itself is pretty amazing. Instead of having to grapple with the shock of a worldwide pandemic and come up with a plan, the school has been able to make a seamless transition.

Rhonda proudly said: “Akhepran’s mascot is the SCARAB! It is a beetle that symbolically represents resilience and transformation. These are the character traits that we embody in our scholars.”

That resilience and transformation is something I have seen Rhonda embody in her own life. She is a leader in the Afrocentric conscious movement in the country, as well as in the world of the vegan and alkaline food lifestyle. Rhonda, and her husband of 12 years Koji Wright, were promoting these causes even when they weren’t as popular as they are today. She is a wellness advocate and founder of a community organisation called SEEDlings Place, which gave birth to the popular wellness Green Earth Festival.

“I am passionate about facilitating the impartation of knowledge about living a healthy and fulfilling life so that our SEEDS… my children and the generation they are a part of… and even their children, will be wiser,” Rhonda said.

“I want them to be armed with information to make better, more enlightened decisions. I want them to be influenced to ultimately choose to elevate their quality of life much earlier than I did, in terms of what I put into and on my body temple.”

That may sound simple on the surface, but living in a country with limited options in terms of quality, value and affordability of vegetables, makes Rhonda’s tenacity to feed her family this way commendable. Her children Ptah, Sia, Nefer and Ma’at are vibrant, healthy and smart and stand as evidence that the healthy lifestyle is paying off. The elder three attend Akhepran and since the lockdown, they adjusted to online learning with the rest of the school population. The only difference is, their mother is the principal, so I suspect there’s no ducking a class or two!

“Like every other family, this circumstance has provided a beautiful opportunity for my family and I to spend much more quality time together than we would under ‘normal’ circumstances,” Rhonda shared.

“We have consciously connected more and deepened our bond as a family. I have been able to schedule a family reading hour every evening. We have been cooking more and eating together as a family regularly. We laugh more frequently and engage in more family silliness and playfulness! I have also literally pulled down all of my old homeschool resources which were boxed up and finally made them accessible to my five-year-old (who I initially kept them for anyway). To my children’s chagrin, I have definitely taken advantage of this time to require my children (and me) to actively work on removing some undesirable, unhealthy habits that have developed over time and ingrain or return to habits that will serve us long into our future.”

Rhonda spent most of her professional career at Texaco, which later became Rubis, where she worked for nine years. Her last position was as a brand marketing specialist, managing a marketing budget of half a million dollars. She was responsible for managing the company brand in English-speaking Caribbean countries (The Bahamas, Jamaica, Cayman and Turks & Caicos Islands). After leaving there in 2009, Rhonda homeschooled her two eldest children for two years before joining Akhepran International Academy’s administrative team in August 2011. She worked with and trained directly under founder and then-principal, Dr Higgs. Rhonda was appointed to the position of principal by Akhepran’s board in July 2017, and is now leading the school through one of the biggest changes it has had to face since its inception.

Being a community builder is nothing new for Rhonda, as she stands on the shoulders of family members who have made it their life’s testament. Her mother’s maiden name is Thompson, and thus, she is a proud member of the Bruce and Thelma Thompson clan. Her grandmother, Thelma Cordella Thompson (nee Scavella) passed away less than two weeks ago – on April 15 at the age of 102. She was affectionately known as “Mother” by all of her descendants – 17 children, 83 grand children, 145 great-grandchildren and 35 great-great grandchildren. She left this world quietly in her sleep, at her home on Chapel Street, where she was a fixture in the community. Literally thousands of people were touched by her smile and her warm spirit that they witnessed any time they passed her house. She was known for sitting on her porch where she watched and waved to the world from her bench. She never learned to drive and therefore she walked everywhere she went, including to and from the hospital where she volunteered with the Yellow Birds for 47 years.

“She didn’t have a lazy bone in her body - she was the epitome of a hard worker, always engaged in some activity even if it was cleaning her house or yard,” Rhonda recalls of her beloved grandmother.

“She was an independent woman who liked to do things for herself. She was a stern, no nonsense woman, and wouldn’t hesitate to put you in your place if you stepped out of line or worse… rumpled up her house! Mother was a very meticulous and particular woman! Every inch of her house was curated perfectly - nothing was out of place and everything was spotless. She is undoubtedly a shining example of virtuosity in her own right. She was disciplined and dedicated to her God, church and family. She was also unselfish, often putting the needs of others before her own. So much of what she embodied can be seen in the generations who have come from her, and I see many of her traits in me and my children, especially my girls.”

Rhonda leaned on the strength of her grandmother through one of the most important moments of her life: “I was blessed to have a homebirth for my fourth and last child, Ma’at. My grandmother gave birth to 10 boys and seven girls, all for her only husband, Bruce – and all of them birthed right in her home in Chapel Street! If that isn’t the embodiment of superwoman strength, mentally and physically, I don’t know what is! Seconds before Ma’at came, I struggled to make the very short walk down the hallway from my bedroom where the midwife completed her final examination. It felt like a thousand miles to my living room where the sacred space had been prepared for me to bring Ma’at forward. In that moment, I subconsciously called upon the energy of Mother, upon whose shoulders I stand, to give me the strength to complete that walk. I needed Mother’s help; her indomitable strength and spirit so that I could put one foot in front of the other. I needed her prevailing force to remind me not to give up. I was surrounded by my husband, children, father, close friends and spiritual mothers including Dr Higgs. It was a community birth, surrounded by love. Knowing that Mother had done this 17 times, gave me the unquestionable confidence that I could do it also – even though in that moment it felt impossible!”

As the Thompson family prepares to lay their dear Mother to rest, it will be a difficult funeral because of the social distancing measures in place. What should be a grand funeral is restricted to just 10 people. However, the God that Mother served has not forsaken her as her home going ceremony will be live streamed to the family Facebook group.

“The Thompson family legacy guides me and grounds me,” says Rhonda.

“It is like a lighthouse, keeping me on the right path and helping to make me accountable, not veering too far from the high standards expected of someone birthed from a woman like Thelma Thompson. My family legacy gives me the courage, strength and wisdom to know that I have the wherewithal to persevere and overcome all things!”