Alicia Wallace: Towards A New Horizon? Not With The Same Old Names Writing The Script

The optimistic among us believe we may be moving toward more participatory governance. It is possible there will be more opportunities for citizens to more directly engage in decision-making processes. We cannot know for sure whether this shift is taking place due to this administration’s desperation and dearth of transformative ideas or the agitation of the public, frustrated by the confusion and constant changes to the COVID-19 response and ready to share ideas and make use of their expertise.

We now know of two committees which have been formed, both with important themes, but leading people to question their composition. Why would a national committee on food (security) be chaired by a person who does not have expertise in agriculture, fisheries, food assistance or any related area? When the familiar name was announced, even though they were upset, people had to admit they were not surprised. Many expressed dismay on social media and radio talk shows on Monday. Everyone could think of at least one person better suited to the position and many noted the same names come up repeatedly.

Decision-making power continues to be placed in the hands of a few. Even an administration led by a political party that raged about the opposition’s “friends, family, and lovers” model keeps its pool small. We are speculating, but we need to be able to recall this when we have the conversation about campaign finance reform again. We need to ensure governments concern themselves with doing what is necessary for the good of the country without having to balance it with a political party’s debts and promises to financial backers, effectively making them puppet masters. Maybe those kinds of commitments keep us in stagnation.

The Economic Recovery Committee sparked just as much debate as the National Food Committee. The list of members was circulated on the weekend. Criticism of the composition pointed to three major issues.

We desperately need to move away from the usual suspects. The same people are given the opportunity to contribute over and over again while others are left on the outside. This is not to say those people do not have anything at all to offer, but that we limit our potential when we do not invite more people – different people – to participate, innovate and lead.

Tourism, banking and finance are prominent themes in the list of members and their affiliations, indicative of the areas of focus. The statement on appointment of the Economic Recovery Committee said it is to focus on, among other things, economic diversification. Where are the manufacturers? Where are the micro and small businesses? Why is there no one with expertise in agriculture and fisheries? Is there really no one on the committee to bring a Family Island perspective? What about young people in business? Why does a committee of 15 people have only six women?

The Prime Minister said the committee “should be bold and creative in its recommendations,” but there is no one from the creative industry. How are we to “build a more dynamic and diverse economy” when the committee looks as it does? When will the usual suspects recognise their privilege and use it responsibly to make space for other people?

Who will speak for us? Can anyone?

As is often the case with criticism, there is opposition. There are people who see nothing wrong with the committee or think people complain just because they can. They see no use in pointing out the composition of the committee is far from ideal. I have seen several people reason that it is impossible for everyone to be on the committee and it does not matter that this particular group was selected because they are to represent us and we are expected to communicate our interests and suggestions to them. This is an interesting concept. It is almost as though they expect the committee to work the way many of us wish Parliament worked – representatives sustaining engagement with constituents and advocating for them, representing their interests, when they meet with their colleagues. We already know that is not what happens. If the people voted in by us cannot be bothered to engage us, what can we really expected of appointed committee members?

Do we really know what representation means? I am not convinced that we, as a people, understand the responsibility of the representative and the represented. We have not been successful in sustaining these relationships.

Representation is modelled satisfactorily by the non-profit world where organisations focus on causes and communities. They exist to fill the gaps. They have to be in touch with community members to be able to advocate, supply and create change. They maintain contact, find out what people need, work to meet immediate needs and agitate for systemic change to benefit the community. When do committee members ever do that? Is it possible for them to do that when they are not a part of these communities, do not recognise the specific needs of the communities and do not even acknowledge they exist? Can they see beyond their own areas of focus? Will they create space for others? The odds do not appear to be in our favour.

The committees are definitely not inclusive and have not excited us nor made us optimistic about what is to come, but we have been given the opportunity to share ideas through the Office of the Prime Minister website. There is a simple form we can complete to submit ideas, but there is not option (which is available on many platforms) to send a copy of the message to ourselves for our own records. The recommendations are not made public, and by submitting through the form – as opposed to a trackable option like email – there is no evidence of the submission or origin.

By all means, make your recommendations. Participate. Help make the response to the COVID-19 crisis better. I suggest, however, that you copy the text of your submission before you send it and publicly share it in whatever way suits you. Post it on social media, make it a blog post on your website, or send it as a letter to the editor.

We deserve to know our own brilliance, to give and receive credit, and to have our ideas read, validated, and amplified in the public. 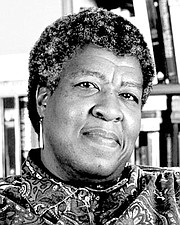 A dystopian book worth the effort

I spent last weekend reading Octavia Butler’s Parable of the Sower after putting it off for years. I bought it over a year ago and keep telling myself that I would read it soon. I had little reason to delay it except that science fiction and fantasy require a certain attentiveness and often create worlds I need to pause to figure out.

When I finally started reading the book several days ago, I knew I was reading it at the right time. It is oddly relevant now, but without coming eerily close to our reality the way many, say The Handmaid’s Tale and the movie Contagion do. The 1993 dystopian science fiction novel is set in 2025. Lauren Oya Olamina is a hyperempath – feeling other people’s pain and pleasure – growing up in a gated community in California after the devolution of society. Her father is a Baptist minister, but before she is even baptized, she ceases to believe. She develops her own religion called Earthseed which is based on the concept that god is change. When she is forced to leave the community following an attack, she begins her journey toward another world, making followers out of refugees she meets on that path.

This book has one of my favourite qualities – it tackles complex issues with clear, precise prose that makes it easy to read though it may not be as pleasant to digest. I have already promised a friend to read another book this weekend so we can talk about it, but after that, I will return to Octavia Butler. Hers is a kind of fiction that raises important questions that make readers search for answers within themselves. What better time for self-reflection than now?

Some of the realities of our political system and some of the reasons it continues to fall short of expectations.

Over the years there have been many among us who have made the effort to contribute ideas and suggestions through various media, most of them being discarded by the incumbent powers that be as the views of political malcontents, fringe lunatics, or collecting dust in some government archive.

Many Bahamians understanding of good governance and representation, unfortunately, doesn't extend beyond the next handout. Over the years since majority rule, we have lost our collective ability to think or provide for ourselves leaving that to our political masters, focusing on the inconsequential and material, rather than the larger picture.

Sadly we have become so tribal, partisan, and cannibalistic in our politics that regardless of which cabal is in the seat of power the results are predictably more of the same and our political leaders understanding and appreciation of constructive and positive criticism is about on the same level as the peoples understanding of their representation.