Stateside: Which Way To Go To Bring Life Back To Normal?

It’s called the Gadsden flag. You’ve probably seen it. It usually has a mustard yellow background and features a coiled timber rattlesnake, poised to strike like a cobra. Below the snake are these four words: Don’t Tread on Me.

The Gadsden flag dates back nearly 250 years to the American Revolution. It was used as a rallying symbol for the Continental Marines as they fought what often seemed to be a hopeless battle against the might of the British Empire.

In recent times, the Gadsden flag remains a powerful symbol of resistance to perceived remote oppression. You’ll see it draped over sagging fenceposts at an outlaw compound in Eastern Oregon. It will appear in a window at an isolated ranch somewhere in the vastness of Texas. Maybe it will be in the background at a rally in the Deep South against the federal American government in Washington DC. The flag often flies at anti-government rallies in New Hampshire, where the state motto is still “Live Free or Die!”

The Gadsden flag appeared the other day in a new context. News photos showed a man in a baseball cap holding the flag outside the window of an older minivan. He was part of a rally to promote the lifting of a stay at home order still in force in the state of Virginia. “Re-Open Now!” was written in large letters on the window behind the front passenger seat.

As the US tries to come to grips with the COVID-19 health crisis, strong centrifugal forces are in play. Several states have begun to reopen their economies. Governors across the US are facing unprecedented pressure to lift stay at home orders and allow workers to go back to work and kids to go back to school. The yearning for an end to this dreadful pandemic is strong and natural and even in big afflicted states like Florida and Georgia it is becoming irresistible.

American President Donald Trump, cannily intuitive as always, has managed to position himself as the voice of this longing to return to normalcy. This is Trump’s special skill. He speaks and tweets often politically incorrect thoughts held by many millions of voters in the US. Even as his own top medical advisers increasingly dare to contradict his extemporaneous oral meanderings at daily press conferences, the President persists in pushing what seems like a dangerous rush to reopen.

In the process, Trump can appear to critics and allies alike as a hapless buffoon musing on national television about the positive remedial potential of injecting poisonous household cleaner into humans with the coronavirus. He is openly described as a heartless, soulless narcissist determined to avoid any personal responsibility for the pandemic or its dire consequences. And as always, these charges, which are entirely self-inflicted, seem stick to him for a while and then are shrugged off as just more evidence of who he is.

Who Trump is may appeal to fewer independent voters these days. As his campaign continues to search for an issue – any issue – that can besmirch his certain November opponent Joe Biden, Trump offers daily fodder for Democratic attack ads which have already begun to air in battleground markets in the Upper Midwest.

There are signs Trump and his Republican allies are slipping. In Wisconsin, despite the efforts of the GOP-controlled state legislature and even the US Supreme Court to compel voters to risk their personal health in order to vote, a rigidly right-wing state supreme court justice was just defeated for re-election. In Michigan, Trump has repeatedly picked losing fights with popular governor Gretchen Whitmer. Pennsylvania polls are trending strongly against the President.

Even Senate majority leader Mitch McConnell found himself uncharacteristically on the wrong end of a verbal gaffe the other day. Musing that he thought states should be filing for bankruptcy instead of looking for federal bailout money, McConnell stumbled into a public relations pothole. Normally cautious, careful and quite prudent in his public utterances, the Kentucky Republican misjudged how his remarks would look when subjected to the one-minute soundbite test.

Hopeful liberal pundits are pointing to senior citizen discontent with Trump and restrictive Republican health care policies in states like Florida, North Carolina and Arizona. The tide, they trumpet, is running against the president.

All this must still be taken with a big grain of salt. The general election is still six months away. Today, with the coronavirus still ravaging America and the entire world, that looks like an eternity. And politically, it is.

It might be wise to err on the side of caution

Governors like New York’s Andrew Cuomo, Maryland’s Larry Hogan, Ohio’s Mike DeWine and California’s Gavin Newsom all are looking good compared with the president and Florida’s embattled Ron DeSantis, who was in the White House Tuesday to receive the president’s regal blessing.

Newsom tweeted out some common sense the other day. California is currently in Stage 1 of his plan, which involves staying home and flattening the curve and building out its coronavirus testing, personal protective equipment and hospital capacity. As Newsom explained the plan, Stage 2 consists of opening lower risk workplaces, including retail and manufacturing.

Newsom, pictured right, and Los Angeles mayor Eric Garcetti have both gotten generally pretty good reviews for their handling of the pandemic. With the NFL’s Rams and Chargers slated to share a brand-new LA stadium this fall and the NBA’s Lakers and Clippers emerging this season as likely championship contenders, the governor and the mayor have risked fans’ wrath by remaining sensible in their public predictions. Garcetti said earlier in the crisis that sports in LA with live crowds might have to wait until next year.

Meanwhile, Stage 3 of the governor’s plan includes gradually reopening higher risk environments, including sporting events without live audiences. As part of Stage 4, California will reopen its highest risk environments entirely, but only once “therapeutics have been developed”. That stage would include conducting live sports with fans. Newsom hasn’t set a timetable for the last three stages of his plan.

Trump’s television star scientists, the heroic Anthony Fauci and the elegant Deborah Birx, continue to warn of the likely return this fall of the coronavirus, complicated by the annual visit of the “regular” flu.

Maybe those who are deriding the whole pandemic as a “hoax” will turn out to be right. But as DeSantis moves to reopen Florida for business and potential contagion and South Florida counties try to walk the line between responsible public policy and economic exigencies, it might be wise for potential travellers to err on the side of caution. 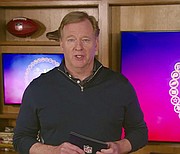 NFL is looking lucky as well as good right now

Quite unexpectedly, the National Football League and its ruthless commissioner, Roger Goodell, are basking these days in the sunshine of last weekend’s widely applauded collegiate player draft. Many observers expected the remote-control draft, conducted without the customary crowds and on-stage hugs and histrionics, to be dull and flat.

They were wrong. The draft was a huge success, watched by an estimated record 55 million viewers on television outlets which included ABC. Normally wooden Goodell did surprisingly well, showing his appreciation for the severity of the health crisis while keeping the show moving along. Goodell will never be a spontaneously engaging TV star, but he did better than many thought he would.

The NFL is looking lucky as well as good right now. The COVID-19 pandemic has slotted in neatly right after free agency and the scouting combine in Indianapolis. True, the draft had to be virtual, and training camps may turn out to be an afterthought this year. But Goodell and others are predicting the crisis will have sufficiently abated by Labour Day that the NFL season can proceed as scheduled. We will see about that, but if it happens, Dolphins fans will get to see brilliant new quarterback Tua Tagovailova in five short months.

Meanwhile, the NBA is still searching for an equitable, sensible way to wrap up its season and transition to the first playoffs in many years in which the Golden State Warriors will not be prohibitive favourites. The NHL has been largely forgotten.

And baseball might be moving to a 100-game schedule starting in July with three 10-team divisions. The Marlins would be lumped in with the Yankees, Red Sox, Nationals, Rays, Blue Jays and Phillies, among others. If the virus relents and makes this possible, there should be some excitement yet on the diamond this year. We can always dream.