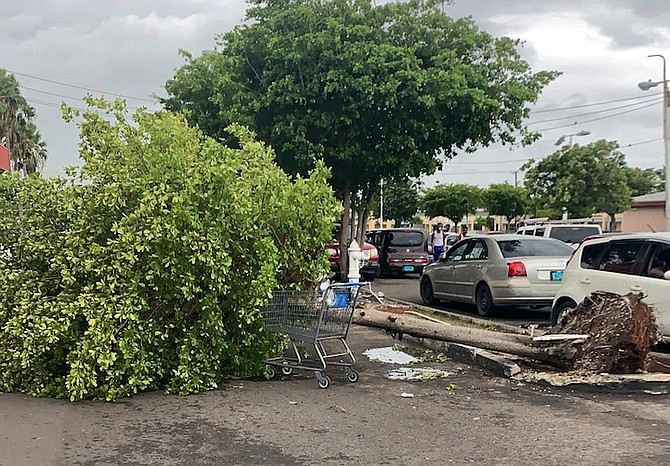 A fallen tree in the aftermath of Hurricane Isaias. Photo: Donavan McIntosh

BAHAMAS Power and Light has left some locals in the dark about why their power was shut off for more than 30 hours in some cases despite winds from Hurricane Isaias barely at tropical storm levels as it churned over the country.

BPL said teams are on the ground working on restoration, however, regeneration was slow in coming in some areas.

Hurricane Isaias made landfall on New Providence late Friday as a Category 1 storm.

BPL announced it would begin a controlled shut down in certain areas beginning Friday night “of certain high-risk areas in the New Providence grid” only if Isaias maintains current conditions and New Providence sees sustained winds of 40 miles per hour.

“Should it prove necessary and storm conditions deteriorate, a second controlled shutdown will be executed, targeting flood-prone areas. Once power is cut, it will remain off until it is safe to reenergize,” BPL announced on Friday.

While some communities in New Providence reported never losing power during the storm, others had power restored between Saturday and Sunday. However, up to yesterday, pockets of New Providence still complained about a lack of electricity.

“My power has been off over 30 hours this is ridiculous what would be the case if we actually experienced a stronger hurricane. BPL you suck,” one person complained on BPL’s Facebook page.

Another person wrote: “. . .I haven’t seen any lines down (in my area). But three days later is unacceptable. BPL really need to do better and return the power. What if this storm was (worse)? BPL you are not prepared at all to handle it. Please restore our power!”

A resident of Stapledon Gardens said: “My power went off around 7pm on Friday. Absolutely no breeze was blowing at the time they shut us down. In fact this hurricane or tropical storm was in no way worthy of any utility shut down. We had to suffer in the heat for no reason for a whole 36 hours. My power was restored at 8.15am on Saturday. BPL has to do better.”

Minister of Works Desmond Bannister said while some in the public might think the hurricane’s winds were not strong enough to warrant power shut downs, the storm presented danger.

“You may not think that the winds were very high, but New Providence registered sustained winds of 37mph, with highest gusts at 56 (mph). As a result of those winds, flying debris, lightning, rainfall and fallen trees, BPL has had numerous breaches in its lines.

“Many of these fallen trees were permitted to grow into lines by homeowners who did not prune them. Whenever there has been a storm, BPL must follow all lines for their entire length before they reconnect power in any area. If they do not do so, they can endanger lives and lead to tragic outcomes. It is important for you to educate your readers on this issue, since so many people appear to believe that BPL has a duty to cut their overgrown trees.”

BPL customers are not the only ones who are up in arms about the power company. The Tribune spoke to an employee of BPL located in one of the Family Islands who said workers are disgruntled.

The BPL staffer, who asked not to be identified, said, “We are sick and tired of how management treats us at BPL. We, on the out islands, are usually given some supplies like food, etc, when there is a threat of storm traveling. This new general manager don’t know what he is doing. Nothing was sent to us; like we are dogs. No instructions and no supplies. They owe us thousands of dollars in overtime pay and want to talk about report to duty in a hurricane. That’s why half of us were not interested in working during no hurricane. If they still owe us overtime, what say they will pay us for the hurricane duty?

“We stop being stupid! We have really lost all confidence in BPL management. I think this general manager should step down. He doesn’t care about the staff and he does not know what he is doing. He doesn’t listen to anyone.”

Another BPL Family Island staffer, listening in on the conversation, said, “What she needs to ask is if BPL has a proper hurricane planning committee. We buy all this millions of dollars of equipment and brag to the Bahamian population that there will be no more outages and now look at us. Staff getting paid late. Staff owed overtime and the power off. We need a new manager. Well as for me, I ain’t checking. I only doing what I can do. Is BPL any better than it was 10 years ago? Lights out!”

Because BPL aka BEC is a complete JOKE! Abaco is also still without power and we're coming up on Dorian's one year anniversary!

I don't know if you live in Abaco, but all the people who worked on the ground there said with the destruction to the power grid, there was no way for that to be restored in less than 1 year.

The reality is that if people had to live with what we in Freeport have had to deal with in relationship to power after a storm, they would learn not to complain about being off for 12 hours.

GB Power is owned an doperated by the Canadian power company Emera and runs like a real first world power company.

Find a proper company to run BPL and give it to them free. We will get power wich will enable us to make money because we will be able to operate our businesses properly with reliable energy.

We will also save the country (tax payers) tens of millions of dollars each year in the money sucking money loosing inefficient BPL.

The reality for Abaco at the moment is numerous daily power cuts for areas now restored to the grid and other areas still waiting for service to be restored. Of course, this restoration of service is dependent upon a successful electrical inspection by Ministry of Works. Many people are still using generators and these folks can be seen filling portable gasoline containers at the local service stations.

BEC may have a couple of new engines but the infrastructure is old and decrepit, Nassau needs tens maybe hundreds of millions in infrastructure upgrades. And to date nobody is even approaching that problem. Nassau can't possibly deal with a major storm like we've had in Freeport the last few years. This is a real problem that has to be dealt with urgently. If Nassau goes the rest of the country follows...

I can never understand why countries in regular hurricane areas go the short term cheap way of running local area grids 10 - 30 kV above ground on poles along with pole mounted transformers [The Crap US system] it make sense in rural areas but not urban ones like Nassau and most of New Provedence. It's Typical short term band aid thinking. The Bahamas needs to bite the bullet and spend on underground cables and sub stations[built above any anticipated regular flood levels] It is a big initial financial out lay I guess however a lot less than the decade costs of repair a replacement after every hurricane, never mind to the benefit of the population and business and of course despensung with all those ugly poles and cables never mind tree trimming!

The option of running underground system is seems limited to exhorbitant cost which is factored to first selling the lot, another factor is that many areas were swamp areas which was seemingly filled in to make lots for sale. There are many areas which are low areas likely to get flooded and poor drainage system.

Swamp land and flooding is not a problem with underground XPLE HT cables in ducts [For easy replacement] all cable jointing is kept at a minimum to keep the impedance low and are of course water proof, as long as terminations to sub stations are above ground. Let's face it, a good proportion of the internet network is via undersea cables and that is in one of the most challenging environments. Yes it cost money and a lot of disruption but how much does it cost to make the repairs and business down time every year maybe more than once in a year never mind the danger of down power lines in wet and flooded streets. Let's face it most of Nassau looks like a cats cradle, and in place danerious.

Fully agree with you Tom on a better underground system. However the money side, the nation, dozen plus inhabited islands seems to be in dire economic straits for future and in dealing with Climate Change and being one of the likely most affected lowlying islands nation in the region.

BEC dilemna in getting the electricity back on quiclky may be in their policy of not cutting and pruning back trees in numerous cases where trees are responsible of private property owners who are unable to afford the costs involved..

Recent figures and figures will indicate financial hardships of some 16,000 not paying their electricity bills ....muchless having money to hire professionals to prune trees in their yards. Seems that the additional thousands whose BEC have already cut off and have overgrown trees in their yards and leaning over the wires seems not to fit in the category of BEC pruning policy of not pruning trees but trees bringing down lines.

Seems there must be a BEC revision policy to cut all trees than not cut a few when the uncutfew or any private that can inconvenience and be most costly in bringing back power and reinstalling time consuming lampposts and wires to benefit many.

Totally useless corporation with more overpaid civil servants AND a board to ho with them. Imagine the folks in Abaco, eleven months and counting🤣😂🤣

The electrical service in Abaco, like Nassau, has been shoddy and deteriorating for decades, just like the Government. I don't know really think there's any hope.....

It is only financially viable in urban areas and main industrial complexes. Most super HV cabling overhead is already on strong pylons that can stand most strong winds. In the 1950s the Centre of Nassau had overhead 10-13kV power lines and yet most of the city centre is devoid of HV power cables so someone thought it viable there, sometime later.

Think of the work that it would provide the locals, no major skills required, if staged over several years thus spreading the financial outlay. With today's modern steerable horizontal drilling technics,only small access trenches required for the cutting end of the drill equipment. [Assuming the various other utilities have the locations an inverts of networks correctly recorded of course ;-) ], would result in less disruption to pedestrian and road traffic. This system is used for installing gas mains and local networks in the U.K. [polypropylene pipes] Limestone would not be a problem.

Using a grid system and local ring main units to very local substation [ Not transformers hanging on wooden poles] would mean any outages due damage or a failure would mean a small area being affected by a power cut.

As I think every one knows investment in infrastructure is key to a nation's prosperity,

The unfortunate problem is not technical or financial but the politicians, while their only main skill is rhetoric and the desire for power along with reliance on the short term memories of the voters, think short term i.e upto their 5 year term and see no votes in investing in the future Remember as the old PM Harold Wilson [ Before Bahamas independence ] said "A week in politics is a long time"
My apologies to those few altruistic politicians that may exist.