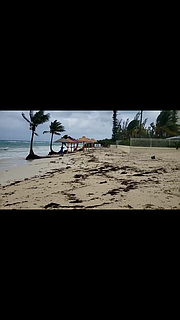 GRAND Bahama fared well overall as Isaias passed near the island on Sunday downgraded as a tropical storm, causing only minimal damage and isolated flooding in some communities due to heavy rain.

Power outages were reported in some areas because of downed poles and power lines, but electricity was restored by Sunday evening.

One of the communities that experienced some flooding was Smith’s Point, where the front yards of some residents were underwater.

Dwight Wilson, who lives on the back street in Smith’s Point, said rainwater covered his front yard and came as far as the front step. With Hurricane Dorian, he had water inside his house.' 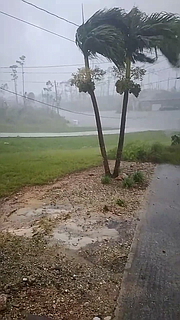 “We had a lot of water,” he said. “But this time the water only came as far as the step… it did not make it to the front door.”

Mr Wilson believes that more storm drains would prevent the settling of water on the back street, which is low-lying and prone to flooding.

“When they built the (new) seawall they put in some drains, but they put all the drains up on the front street where it is high and never floods. They put three drains on the back street down here; we need more drains, and we have been agitating for that even before they built the seawall.”

Peter Turnquest, MP for East Grand Bahama, was aware of isolated flooding in some communities, but was grateful that generally all communities “fared relatively well.”

“Yes, there was flooding in the (Smith’s Point) community,” Mr Turnquest said. “We did have two drains that were drilled with the paving in the area. We will have this new flooding studies by the Ministry of Works to see if further drains will help. Unfortunately, that back street borders a wetland area.” 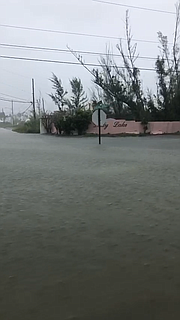 Mr Turnquest said the government will look to the Caribbean Catastrophe Risk Insurance Facility to see if the country qualifies for any excess rainfall claims under its policy.

In the High Rock community, he reported that the front road was washed out again. “We will need to design a temporary solution to protect this infrastructure,” he said.

In terms of property damage, Mr Turnquest said: “We do have some reports of leaky roofs in some areas that have contributed to additional internal damage to some homes regrettably, but not widespread.”

The MP also noted: “We lost the temporary clinic in High Rock, as well as some temporary church and living structures farther east, but no structural damage reported. Considering all that was at risk, we are grateful.”

Mr Turnquest was still awaiting an update on Sweeting’s Cay as of Monday due to disruption in cellular service.

The Tribune attempted to contact Chief Councillor for Sweeting’s Cay Gladstone Russell who could not be reached up to press time.

Further west in the communities of Mack Town, Hunters, and Pinder’s Point, there was no flooding or power outage, according to a resident.

“We fared pretty good,” said Hunters resident Jackie Russell. “There was no damage, and we had no flooding in Hunters, other than water that settled from the rain, but we had power throughout the storm.”

There was also no flooding at the Fishing Hole causeway, which connects Freeport and West Grand Bahama.

“We fared very well; we had minimal damage, just some down power lines and one or two poles that had broken. We had one incident where a tree fell on a resident’s house, but no damage was incurred there.”

In terms of flooding, there was nothing out of the ordinary, according to Ms Palacious.

“West End proper did very well. They were anticipating flooding, but the water actually went out, and we had some very rough seas on the southern side of Eight Mile Rock where the container port is. We did very well, and we thank God for that,” she said.

Pakesia Parker-Edgecombe, MP for West Grand Bahama and Bimini, was relieved that the community was spared.

“We are thankful to God that our community was spared. I do not think we could have taken another blow, in the midst of still recovering from Hurricane Dorian,” she said.

Officials will assist homeowners by referring them to the Disaster Reconstruction Authority, which is mandated to help with home repair for those eligible, she said.