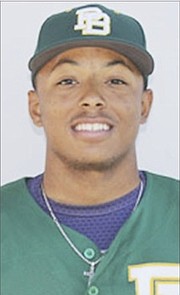 The duo joined a Zoom-call moderated by MLB’s vice president of Baseball and Softball Development, David James, an audience comprised of student athletes from the RBI programme.

Fox, currently a member of the Tampa Bay Rays’ “Taxi Squad” for the MLB regular season encouraged the group to find inspiration in their stories in their pursuit of own baseball dreams.

“We didn’t have a lot of fields, a lot of batting cages [in the Bahamas]. We just used whatever we had to get better, whether that was throwing the ball against the wall or throwing the ball up and hitting it and chasing it.” Fox said, “Just finding ways to get active around the house or whatever area you have, using whatever you have, like a tennis ball or a broomstick. Those little things helped us reach the next level and helped our skills progress.”

Fox is currently listed as the No.24 prospects in the Rays organisation was set to make his 2020 debut in AAA baseball with the Durham Bulls of the International League prior to the cancellation of the minor league season.

As more Bahamians enter the MLB farm system and with Antoan Richardson in the coaching ranks with the San Francisco Giants, both players noted the impact recent success has had on Bahamian baseball.

“As we continue to grow and push in professional baseball, we see every time we go back to the island more young kids that look forward to playing the game,” Fox said. “That’s all we ever wanted: to inspire the generation behind us. It’s changed my life, my family’s life, and allowed me to travel to places I never thought I would have been unless I was playing the game. I never thought I would be playing baseball. I always wanted to run the 100 meters at the Olympics, but I’m so happy that I was introduced to the game, and I just want more and more kids to give it a try.”

Isaacs is currently a free agent, but was most recently a member of the Colorado Rockies organisation. He spent the bulk of last season in Grand Junction at the Rookie Level but also received the highest call up of his career when he was called up to the Albuquerque Isotopes of the Triple-A Pacific Coast League.

“As an athlete, it’s our responsibility to use our platform to bring awareness and bring change,” Isaacs said in reference to the recent rise in social consciousness seen from athletes at all levels, “Everything that has been going on in the past few weeks has brought everything to the forefront. Education is key, and with us, we have a lot of kids who look up to us as athletes, and they are the future generations who will break the cycle [of discrimination in the world].”

Fox said: “There is just one race, the human race. White, Black -- it doesn’t matter. When we step on the field, the only thing we care about is our organization. We don’t look at race. ... It’s important that we continue to push this envelope and educate more and more people. If we keep the fight going, we will see change in the future.”

The duo created the Don’t Blink Home Run Derby, which has quickly garnered international acclaim in the baseball community in just three years.

“We played a lot of games in stadiums with a lot of fans and a lot of excitement, but honestly, I never felt anything like stepping on that stage at the Derby,” Fox said. “The crowd is really close. It’s not like a regular game, where the fans are in the stands far away. You can feel the energy as soon as you step foot on the beach. And looking out into the ocean, this beautiful water, you want to hit the ball as far as you can.”

RBI has featured a web series during the pandemic that has also featured other minorities in the sport, including Rangers’ pitcher Taylor Hearn.

According to its website, Reviving Baseball began in 1989 and through the 2018 season, grew from a local program for boys in South Central Los Angeles to an international campaign encompassing more than 200 cities and as many as 150,000 boys and girls participants per year. In 2010, Jr. RBI was launched, designed to create new playing divisions that provide baseball and softball opportunities for children ages 5-12 that also serve as a feeder to the age 13-18 baseball and softball divisions.

John Young, a former Major League Baseball player and scout, developed the concept of RBI to provide disadvantaged youth an opportunity to learn and enjoy the game of baseball.