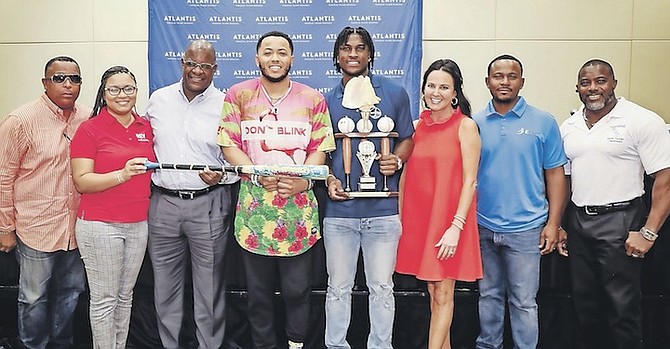 THE CAMPAIGN to galvanise support for the fourth edition of the Don’t Blink Home Run Derby In Paradise was launched at Atlantis yesterday. Photos: Racardo Thomas/Tribune staff 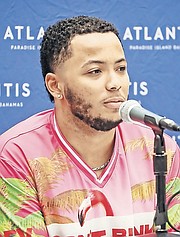 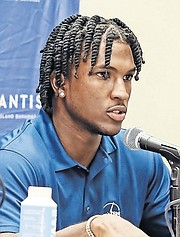 The Don’t Blink Home Run Derby In Paradise has a new title sponsor and will look to extend the event to include several new initiatives when it returns to Bahamian shores later this year.

Event organisers Todd Isaacs Jr and Lucius Fox officially launched the campaign yesterday at the Atlantis Resort to galvanise support for the fourth edition of the event, scheduled for December 18.

After several years of involvement, the Atlantis Resort came on board as the title sponsor and were joined by several stakeholders at the launch, including REV, International Elite Baseball Academy and California based nonprofit - Mystical Builders.

The first three editions were hosted at the Montagu foreshore and the unique concept showcases the natural aesthetic of the Bahamas and the country’s young baseball talent.

“Our goal of the event is to always use this as a platform to highlight our Bahamian baseball players, our Bahamian athletes, and just show what the Bahamas consists of – our natural beauty and these beaches. We have the best beaches in the world,” Isaacs said at yesterday’s press conference. “Being a baseball player, you wanted to really bring the two elements together. The most exciting part of the game, the home run, and then the most beautiful part of us being from the Bahamas, the beaches. So we decided to do something extremely crazy. Set up a stage and hit balls into the water.”

Traditionally hosted in early January, the derby has grown in stature to be showcased prominently by several international media outlets, including the MLB Network, and features both minor and major league prospects from around the league.

“We play a sport that allows us to go places, see places, but, you know, at the end of the day, you have to really come home and use that platform to make it a better place. There were people before us, athletes before us, famous celebrities before us and their respective platforms that didn’t use their platform to build a bridge. We get to raise money, we get to do cool things. But the most important thing for us was to always find ways to get back in the community,” Isaacs said. “Here in the Bahamas our best baseball field is in the prison. So that just goes to show the determination and skill that even despite the lack of funds, the lack of respect to the game, we still are able to produce the most professional athletes in the Bahamas, more than any other sport.”

Bo Bichette of the Toronto Bluejays won the inaugural event in 2018 and repeated as champion in 2019. Miami Marlins outfielder Lewis Brinson captured the title in 2020. This year, the event has already drawn commitments from several past participants and the first of many new additions, Tampa Bay Rays infielder Wander Franco.

“As baseball players, we won’t be able to play baseball forever, but everything we do from day one for the rest of our lives in the community lasts forever,” Isaacs said, “Obviously, we all want this event to outlive all of us, and as a tradition I think that is going to be the coolest part of this whole process.”

In addition to the derby, the event has expanded to include a week-long schedule of activities.

Players and guests will arrive December 14 and the following day, the inaugural Don’t Blink Golf Invitational will take place – December 15. December 16 will feature the groundbreaking for renovations and new facilities at the Pinewood Baseball Park in a partnership between International Elite Baseball Academy and Magical Builders.

Magical Builders is nonprofit corporation that has managed the construction and renovation of dozens of charitable facilities throughout the United States.

“We worked out there everyday and just to turn that place into a beautiful complex would mean the world to us,” Fox said.

On Friday December 17, the participating players will host the annual kid’s clinic at the Atlantis Resort in Paradise Harbour for aspiring student-athletes. In 2020, the partnership with the Charles Johnson Foundation brought with it Major League Baseball’s Play Ball Initiative, the branch of the organisation which hosts kid’s camps around the world. The day will also feature another first on the Don’t Blink Calendar, a Celebrity Softball game featuring derby participants and local influencers.

Saturday, December 18 will be the main event at the Atlantis Resort.

“This is our party week and we are going to title it ‘Players in Paradise’” Fox said. “Every year we try to come up with unique ideas and this year we came up with pirates so the theme is ‘Pirates invade Paradise.’ We’re working on some nice jerseys so reach out to us to reserve yours as early as possible.”

Past year’s proceeds from the event have benefitted the Cancer Society of the Bahamas, the Sister Sister Breast Cancer Support Group and the Hurricane Dorian Relief Effort.

“It’s amazing for us to get this far. Everything is moving so fast, just having these sponsors believe in us and trust these young men to put on this event. Just hearing us out was a plus for us. Just having our sponsors buy in to make this event bigger and better every year,” Fox said. “Sports has changed my life. It took me places I never knew existed. With more baseball being played, it creates more opportunities and more kids that can change their lives so we just want to inspire as many people as we can. You can accomplish anything you put your mind to and there are different avenues to do that. Whatever we can do to impact this country we plan to do our best to do that.”

In just 50 games this season, Isaacs’ 11 home runs ranked second on the team behind the team leading 14, achieved in 75 games.

The Jackals compete in the Northeast Division It includes teams in the Northeastern and Midwestern United States and Eastern Canada. Last year it merged with the American Association and the Atlantic League to become an official MLB Partner League.

Fox extended his hitting streak to 10 games to conclude his season of AAA baseball with the Omaha Storm Chasers in the Kansas City Royals organisation. Fox had a strong conclusion to the season and produced six multi-hit games over the course of his 10 game hit streak and hit three two home runs.

Earlier in the season, Fox became the eighth Bahamian to join a Major League Baseball roster for the regular season. His brief call up lasted just a single game when the Kansas City Royals announced his promotion on July 30, hours ahead of a 6-4 loss to the Toronto Blue Jays in Toronto, Canada. Fox did not make his official debut on the field in the contest and the following day, he was optioned back down to the Storm Chasers.