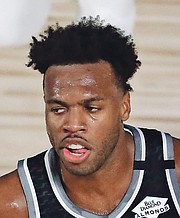 THE Sacramento Kings have been eliminated from playoff contention for the 14th consecutive season.

Buddy Hield had his best shooting performance of the NBA seeding games thus far with 16 points on 6-11 shooting (4-9 from three), but the Kings lost 129-112 to the Houston Rockets Sunday night in Orlando, Florida.

Sacramento fell to just 1-5 in the bubble and were officially eliminated from the postseason by halftime of their game once the Portland Trail Blazers beat the Philadelphia 76ers.

The Kings are the third team to be eliminated from playoff contention in Orlando thus far, joining the New Orleans Pelicans and Washington Wizards.

The Kings’ postseason drought is second only to the Los Angeles Clippers who missed the playoffs for 15 consecutive years.

Prior to the COVID-19 pandemic, the Kings went on a surprising 13-7 win streak to work their way back into the playoff picture that was followed by a series of underwhelming performances in Orlando.

“We have to understand and change our mindset as far as what it takes to win,” said Kings head coach Luke Walton.

“We have a very good group of guys and the main thing I hope we take from this whole bubble experience is learning that lesson firsthand.”

The Kings conclude their 2019-20 season against the New Orleans Pelicans (August 11), and Los Angeles Lakers (August 13).

“I fully expect our main guys to play and to play at a hard level,” Walton said. “These are two more great opportunities for us. We have to be ready to go and take advantage of this opportunity.”