Police Shootings ‘Part Of The Job’ 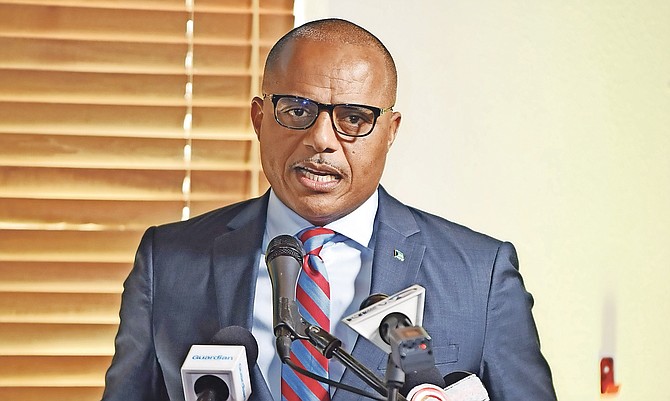 NATIONAL Security Minister Marvin Dames yesterday called the latest police-involved shooting that led to a man being killed and two officers injured “unfortunate” but noted such incidents are “the nature of the business”.

“As soon as it happened, I got a call from the Commissioner who gave me a full update,” he told reporters ahead of a Cabinet meeting yesterday. “He was out there on the front lines keeping the press up to date.

“Nobody likes to see shootings, police or otherwise. It’s an unfortunate situation but this is the nature of the business unfortunately, and we’re in an era where it’s no longer bottles and rocks.

“And when someone aims a gun at you and pulls the trigger, their only intent is to kill and we pray... for the officer and his family and we pray that God will continue to keep people safe.”

His comments to the press came after a man police shot a man  on Monday in the Pinewood Gardens community, fatally wounding him. The victim allegedly opened fire on officers and his mother following a heated “domestic” dispute over prayers.

The scene of the shooting in Pinewood Gardens on Monday. Photo: Terrel W Carey Sr/Tribune Staff

Two officers were injured during the ordeal, but officials say they are expected to recover.

Police did not release the victim’s identity to the press, but friends and close relatives at the scene identified him as Carlton Smith, a resident of Cowpen Road and father of two children.

This incident also follows police shooting and killing three men on Cowpen Road after an officer was “ambushed” by a gunman nearly two months ago.

Yesterday, Mr Dames noted that he was grateful for the services offered by the policemen and added that he was keeping them in his prayers.

“Two officers were injured,” he continued. “I believe one was shot and the other had a leg injury so we’re praying for them and their families. We’re grateful for the job they continue to do. They keep us safe in these dangerous times.

“It’s unfortunate that someone have to lose their lives and we pray for the family of that individual as well. The matter is now in the hands of the coroner and we wait to see the outcome of that.”

Despite the challenges brought by the COVID-19 pandemic, Mr Dames said law enforcement officers have continued to fulfil duties to protect Bahamians. Their commitment to serve their country, he said, deserves to be commended.

“We still have a tremendous amount of resources on Abaco and Grand Bahama in support of that efforts. But, this what law enforcement agencies do and we’re grateful to them and we continue to pray for them and their families.”

Last month, Mr Dames told The Tribune that as many as ten police officers have been infected with COVID-19, with over 100 officers in quarantine.

Asked for an update on the matter yesterday, the Mount Moriah MP refrained from giving exact numbers to the media, only telling reporters he thought law enforcement agencies “did a great job” in containing the outbreak from within.

Instead, he replied: “I don’t really want to get into the specifics of it but…at the beginning of this, we had ensured that our agencies had put in place plans to manage throughout this period and those plans have been working. In the defence force, I think the total number is just around ten thereabouts. That’s not bad for an agency that’s out there, that’s at sea and that’s on almost every island and that are out there on the front line.”

“The police force, those numbers I think they have been too in double digits but not high in comparison with the number of officers within the police force and the duties that they’re performing. “

It's important to call out ask of Comrade Marvin, why does 'em put so much public effort into grooming 'emself looks like the half-ass, cheeky member the crown he succeeds comes across as? Nod Once for Yeah, Twice for No?

I have no problems with shooting armed thugs. Shoot em all, if they have a gun they're the problem. Shoot em all and let God sort em out...

Dame says "IT is the nature of the business." what is he praying about. he also said he believes one was shot . should he not know.

The commissioner says. If one confronts the police they should be prepared to meet their maker.