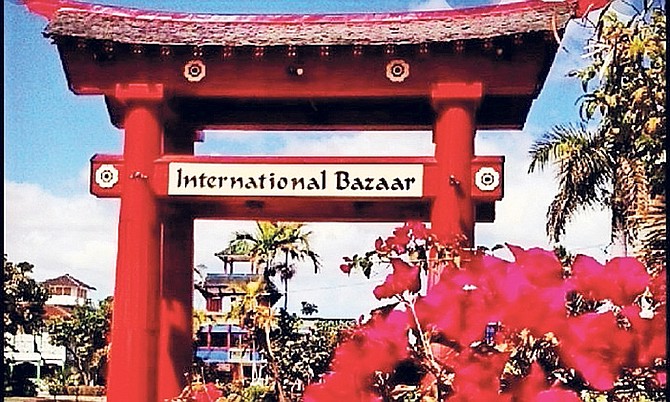 A 5,000-signature petition for the demolition of a well-known Freeport landmark has been launched and has already exceeded 50 percent of its signature target.

The Torii Gate at the International Bazaar has been a distinguishable fixture in Freeport for many years, especially during the economic boom in Grand Bahama up to 2004.

A concerned group of residents is now calling for the removal of the bright red Torii Gate landmark - which even after many devastating hurricanes on GB continues to stand strong and tall. “The Torii Gate must come down! Grand Bahama’s spiritual and economic survival depends on it,” according to the online petition on Change.org.

A Torii Gate - which is affiliated with Japanese religious culture - is the symbolic gateway between the spirit realm and the human world in Japan. They are part of the Shinto religion – one of the two main religious beliefs in Japan alongside Buddhism – and you will find a Torii gate at the entrance to Shinto shrines.

In 2004, following hurricanes Frances and Jeanne, Freeport went into an economic downturn, with the closure of Royal Oasis Resort due to severe hurricane damage. This affected the nearby Bazaar, and the many merchants at the once-popular shopping attraction were forced to shut their stores.

Despite incentives and initiatives to attract the opening of new businesses at the Bazaar, it has never been able to bounce back and has fallen into a state of disrepair. The buildings are dilapidated and have fallen apart.

This week, the group, Ignite Grand Bahama, launched an online petition, ‘Demolish the Torii Gate From The International Bazaar,’ to the Grand Bahama Port Authority.

Of the 5,000 signatures that are being requested, about 3090 signatures were collected and polled as of August 12 online at Change.org.

Prior to the petition, a young business woman had expressed concerns over the landmark on Facebook saying it was against The Bahamas’ religious belief of Christianity and called for the removal of the Torii gate. She believes that it is prohibiting Grand Bahama’s economic prosperity. A local pastor also followed suit on social media in support of its removal.

The petition stated: “We are a Christian nation and we no longer want to be slaves to another culture that is not relevant to the growth and sustainability of Grand Bahama. We know that this gate does not represent who we are! It is time to take our future back from the ones that snatched it from us! The Torii Gate must come down! Grand Bahama spiritual and economic survival depends on it.”

Troy McIntosh, deputy director, and city manager at Grand Bahama Port Authority, said he was not aware of such a petition.

He said the Bazaar is owned by many private owners.

“The bazaar is owned by multiple owners, and so, it should be addressed to those owners. It is a private entity that is managed by an association,” he said.

Mr McIntosh noted that there are protocols that must be followed concerning complaints regarding dilapidated buildings and properties in Freeport.

He said that dilapidated buildings have been an ongoing issue in Freeport.

“There is a component in the bylaws that we are governed by that states that buildings must be structurally unsound. If it is determined by an independent structural engineer that it is structurally sound, we cannot touch it,” he explained.

Mr McIntosh stated that the GBPA would have issued environmental bylaws and are waiting for it to be approved by the government. “That gives us a little more teeth,” he said. And what we have done is partnered with the government. There is an Environmental Task Force that has been able to address some serious matters in Nassau. And so, they came to Freeport, and we are looking at some matters with them to see if we can address some derelict building matters with them to see how we can accelerate issues within the city of Freeport,” he said.

Bunch of nonsense. That gate has absolutely nothing to do with Freeport's decline.... Pure nonsense...

I totally agree. The Torii Gate is pure decorative and was meant to give the International Bazaar an international flavour. Let's not get superstitious and blame the Torri Gate for Grand Bahama's economic misfortune. Let's not take a page out of the Taliban and ISIS and start demolishing ancient monuments, just because they do not conform to the religious views of the of the people or their leaders. Let's just treat is as part of history and not insult Japanese sensitivities.In fact, let's use the Torii Gate as a symbol to encourage Japanese investment in the Island.

I totally agree. The Torii Gate is pure decorative and was meant to give the International Bazaar an international flavour. Let's not get superstitious and blame the Torri Gate for Grand Bahama's economic misfortune. Let's not take a page out of the Taliban and ISIS and start demolishing ancient monuments, just because they do not conform to the religious views of the of the people or their leaders. Let's just treat is as part of history and not insult Japanese sensitivities.In fact, let's use the Torii Gate as a symbol to encourage Japanese investment in the Island.

Wow ... unfortunately this is what you get from the “D” Average ... tear down one of the few things left standing on GB that is symbolic of historically better times ... it is the same mentality that resulted in broke GBs to needlessly pile onto a Ferry to Florida in the middle of a pandemic to spend money they do not have and return along with their cherished Flea Market Specials infected with Covid ,,, and then apply the same “great thinking” to use the 48hr Notice of impending resultant Lock Down to flee GB like Rats on a Sinking Ship to infect the whole Archipelago!

Man, you would think that there are more important things to worry about than the Tori Gate--I would be more concerned as to where my next meal is coming from!

It is the International Bazaar not the Bahamian Bazaar. Open your minds and pick a battle that means something and is constructive.

These people ain't got nothing to do aye? Should be trying to emulate the Japanese if anything, those people have sense.

People are so stupid

5,000 ignorant intolerant idiots! If anything, they should be removed!

It is a shame that 5,000 ignorant people would choose to destroy a symbol that represents the historic properity of Freeport in it's heyday because of voodoo beliefs. They should instead try to emulate the success that Gateway the arch represents and strive to put Freeport back on the map. But typical of Bahamians to blame everybody and everything else for their failures instead of recognizing them and proceed to correct them instead of the usual " waiting on da gummamint to fix erryting" !!!

I want to know who "Woke" them up to this pressing issue. Claiming some anti Bahamian significance to this while adopting the U.S. Antifa anti statue anti everything else movement.

Way too many damned trumpies in our country... Bout antifa... Must suck to live in the Bahamas and be a racist. Whhooooeee glad it aint me. Lol...