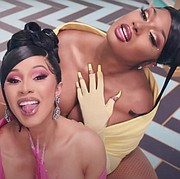 Rappers Cardi B and Megan Thee Stallion in the video for “WAP”.

Cardi B and Megan Thee Stallion have stirred up a storm of controversy with their new song and accompanying music video “WAP”.

The lyrics of the explicit track tell the story of a woman who is confident in her sexual prowess and the fact that men find her irresistible.

The song instantly became a hot button topic on all social media platforms and broke several records, including becoming the first female collaboration to reach number one on Spotify. It also reached number one on the Billboard charts.

Released on August 7, the song drew 93 million streams in the week ending August 13 in the US, according to Nielsen Music/MRC Data - the most for any track ever in its first week of release.

But while “WAP” (if you don't know what its stands for, go ahead and ask Google, but be warned, it’s definitely NSFW) is a bona fide smash hit, it seems to draw more than it’s fair share of criticism from all corners of society.

James P Bradley, a Republican Congressional candidate from California, tweeted that he heard the song "accidentally."

"Cardi B and Megan Thee Stallion are what happens when children are raised without God and without a strong father figure," he said, adding that the song made him want to "pour holy water in his ears.”

Meanwhile, supporters of the song say the criticism simply proves there is a blatant double standard when it comes to men and women's sexuality.

Brianna Holt of the entertainment brand Complex wrote: "Both Cardi and Megan are powerhouses of female sexuality, independence, and dominance.” She described “WAP” as the "the epitome of female empowerment.”

Of course, here in the Bahamas, social media was lit up with reactions to the song as well.

Tribune Woman got several of our readers to comment on the track and the controversy surrounding it.

“I am not offended, I love the song and I need a girl like that in my life. There is nothing more sexy than a woman who is confident about her sexuality.”

“I don't know what the big deal is, to be honest. Men and women have sung about sex for years in all genres – R&B, rap, country. If you listen to the music from back in the day, they were very fresh. Now ‘cause it’s Cardi and Megan, people in their feelings,” she said.

Arnette noted that the song is just sexy fun.

“Everyone, men and women, always talk about they a beast in bed; men do it, women do it, and it’s all in good fun,” she said.

On the flip side, Cindy said she is not a fan.

“The song is a little vulgar for me. I don't mind the message of ‘hey, I am sexy’, but the language is just too much for me. It's not something I would want to listen to. I won't be blasting it in my car, no,” she said.

Peaches said her only critique of the song is that it seems not to promote safe sex, especially if you’re having intercourse with multiple partners.

“The whole song talks about having irresponsible sex and that is not a message I feel needs to be widespread,” she said.