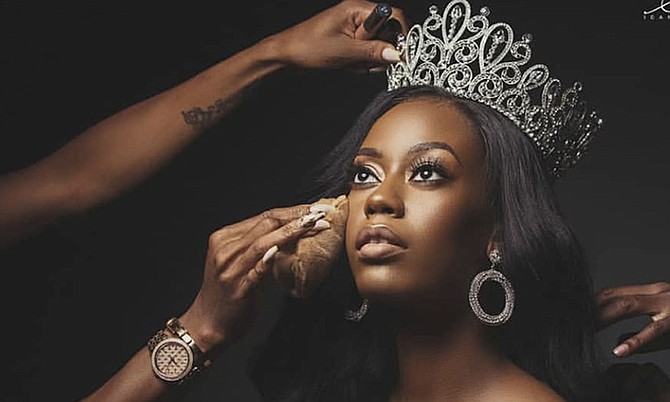 As her reign comes to an end, outgoing Miss Bahamas Universe Tarea Sturrup gives up her crown with disappointment in her heart and unfulfilled dreams of making a difference.

Tarea’s time as the 2019/20 queen officially ends today, and sadly, she said, her pageant experience was not “worth the investment” and left much to be desired.

The COVID-19 pandemic aside, Tarea said there was much more she had hoped to accomplish as title holder even before the world was forever changed by the virus. She blames the lack of structure, proper leadership and support from the Miss Bahamas Universe Organisation for her lacklustre experience.

“The past year of my life has concluded one of the greatest dreams of mine: representing my country as Miss Bahamas Universe. And although I completed my reign soundly while supporting our country through a natural disaster, a pandemic, and by raising awareness of mental health, there is a looming subject I must broach in this short lull between successions,” she told Tribune Woman.

The current state of the Miss Bahamas Universe Organisation, she said, does not make this pageant one that young women should aspire to participate in.

“It hurts me to raise these concerns, however, my duty as a female leader is to seek what’s best for my fellow woman,” she said.

After winning her title last August, Tarea said she had high hopes for accomplishing a great deal for her community. It has always been her desire to show the world that pageants are about much more than just beauty.

However, when the time came for her to act on various initiatives to bring attention to her platform, which was mental health, she claims she was not given much support by the Miss Bahamas Universe organisation and told she could not do things separately from the organisation.

“Everything that anyone saw me do during my reign as it relates to my platform was done on my own. If I had waited on the organisation to do things I would have not got anything done,” she said.

Tarea feels the pageant could return to his former glory days, but that would require significant changes to how the organisation currently operates.

“I think it’s a missed opportunity for the country,” she told Tribune Woman.

“We have not had a proper roll-out in years for this pageant, and in my opinion it is not a great representation for a national pageant that participates in Miss Universe.”

Despite her experience, Tarea said taking part in pageants can be a great thing for young women, but she warns those interested to assess the costs and risks of doing so before entering.

In her case, after paying the entry fee, she said was not aware that later expenses would be coming her way. She feels these additional costs should have been covered by the initial payment.

“I think things like this should be talked about because pageantry is a great investment. It is a great opportunity for young women, but I think when you are making an investment you have to know the risks, and a lot of people do not,” she said.

“Many of them are like me, who expect their entire world to change off of this. But this was not what I expected it to be, that is why I am just saying to other women who may be interested in entering to be wary. It was very stressful for me because I was operating as an organisation within myself.”

Promoting various social issues as Miss Bahamas Universe Bahamas was very important to Tarea. A cause that was of particular significance to her was shining a light on dementia; a disease her late grandmother suffered from.

Her grandmother, Myrtle Scavella, was diagnosed with dementia four years ago. Up until then, Tarea had no clue as to what was happening to her grandmother. But once the diagnosis was official, she decided to educate herself on the disease and realised in hindsight that her grandmother had been displaying symptoms for a long time.

Talking about her late grandmother, who was recently laid to rest, Tarea said makes her feel even more disheartened as it relates to her reign as Miss Bahamas Universe. She claims she did not receive any moral support from the pageant organisation during this difficult period.

“(They) did not even reach out to me and she was the basis of my entire platform,” she said tearfully.

Additionally, Tarea said one of the main things she wanted to do was strike up a partnership with ALIV to create an Amber Alert type of system for elderly people who wonder off on their own.

“If we had something where everyone got a text on their phone that says ‘look our for this person’, I think the person would be found a lot of quicker,” she said.

“My grandmother, before she passed, went walking quite a few times and it was very stressful. I think something like this would have been a great resource because there was no one we could call.”

Other parts of her plan included creating a care-giving database to promote mental health.

“I ended up making that platform on my own and promoting it on my own with my small following. But it could have been even greater on a national scale. If I had the resources I could’ve create a PSA and get the message out. Those are the things I expected I would be able to do if I had the platform and backing of the organisation,” she said.

“The reason why you enter these things is so that you can create some sort of change. If (it’s) not about making change and cultivating these young women into future leaders, then what is the point of the pageant?”

Tribune Woman reached out to the Miss Bahamas Universe Organisation for a response to Tarea’s claims. They said they would like to answer more in depth at a later date, but in the meantime they made the following statement: “Miss Bahamas Universe has been grooming women for pageant for decades and continues under the directorship of Mr Anthony Smith since 2018. We have exercised professionalism, transparency, and pride ourselves in not only equipping our ladies with confidence, but the tools they need to succeed throughout their lives.

“It’s not uncommon for an organisation to have some scrutiny from the title holder. Challenges also arise when personal convictions differ. However, the Miss Bahamas Universe Organisation has always believed in the support of it’s reigning delegate in addition to living up to the standards and practice of the Miss Universe creed, ‘Confidently Beautiful’.”

Get over it honey, 90% of anything our government is involved with turns to crap, so don't feel bad etc because they curtailed your aspirations, that, is on them, not you !!!