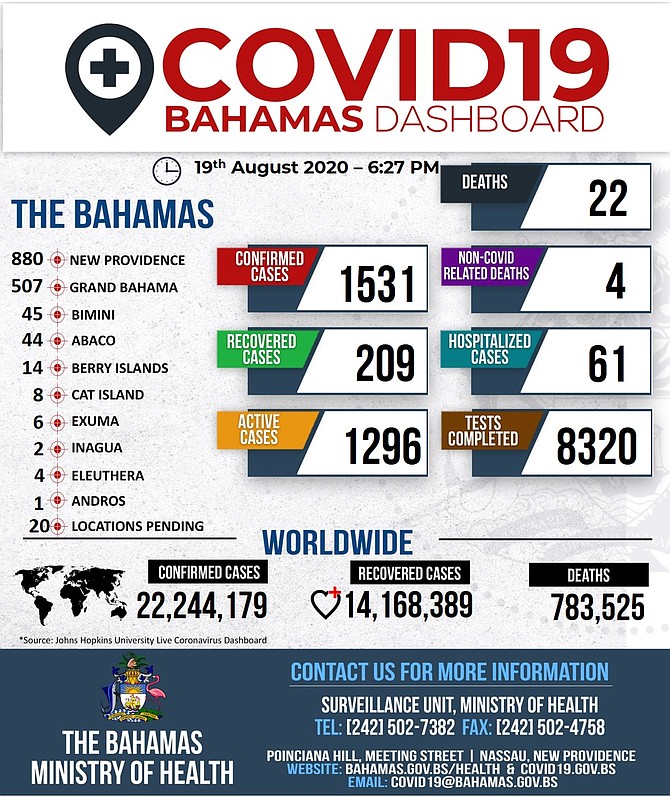 ONE hundred and seven COVID-19 cases were confirmed yesterday and the death total from the virus increased by two for a total of 22.

The latest deaths include a 46-year-old man and a 65-year-old man, both of New Providence. The country now has 1,531 confirmed cases, of which 1,296 are active.

The Ministry of Health also revealed the impact the virus is having on bed space with 61 people now hospitalised in the country, adding that the previous figure on hospitalised cases was inaccurate.

Clarifying hospitalisation numbers, the ministry said: “It is noteworthy to mention that when a person has contracted COVID-19, symptoms may be mild enough for a person to self-isolate at home. However, when symptoms become severe, a person may need a higher level of medical care. (On Tuesday), the 18th August, 2020, edition of the COVID-10 Bahamas dashboard reported there were seventy-eight persons hospitalised. The number of persons actually hospitalised tallied at forty-seven.

“The discrepancy represented a misclassification of persons at the Sandilands Rehabilitation Centre. This institution is generally not designated as an acute care hospital or facility, rather a long term care facility. The first positive COVID-19 person was identified at SRC on 25th July, 2020. Contact tracing and further testing activities have identified additional cases at this institution. Of the positive cases, 20 persons are having symptoms and counted as clinical inpatients ‘hospitalised’ and are in isolation.”

Officials also reported an additional non-COVID related death, bringing the total to three. This category refers to people who had COVID-19 but died from an unrelated disease/incident.

The newly confirmed cases include 59 people on New Providence, 44 on Grand Bahama, one on Exuma and three with locations classified as “pending”.

The dashboard information came after the latest Emergency Powers Order was issued, which allows laundromats to open between 6am and 9pm along with grocery stores, pharmacies, gas stations, hardware stores, and water depots or water production companies.

As for laundromats, they must maintain fifty percent occupancy.

Billed as a “storm preparedness” order, the document was released after 5pm yesterday, hours after the previous order had expired.

The order followed Prime Minister Dr Hubert Minnis’ reversal of his decision implementing a near complete lockdown of New Providence.

However, only essential workers and businesses are allowed to operate away from home.

People can now leave their homes to obtain water from public standpipes between 6am and 9pm under the order.

Manufacturers can produce goods for food stores or mail boats for inter-island trade from Monday to Friday between 6am and 6pm, “provided that the manufacturer does not open to the general public.”

Wholesale grocers or bakers can deliver to food distribution centres, the Department of Corrections, retail grocers or mail boats heading to Family Islands.

Commercial banks, insurance companies, brokers and agents can operate daily between 8am and 5pm while commercial fishing businesses can operate to deliver catch to processing plants.

Weddings remain prohibited. However, funerals that were prearranged to be held between August 18 and August 25 can be held if they are conducted at the graveside and are limited to five people excluding officiants and mortuary workers.

Every time they add new deaths to the chart they also add an additional "non-covid" death. Who do these idiots think they're fooling!?

On another note, word has it that Fred Mitchell wants a general election forced ASAP! These idiotic politicians just don't GET IT, now is not the time for politics, yes Minnis and his loyal cronies MUST resign IMMEDIATELY but right now we need to worry about flattening the curve of this virus and preparing for these Hurricanes approaching our doorstep! Now is not the time to wonder who is getting their fill of the gravy next, a general election does nothing during this pandemic because the PLP (just like Minnis) has no plan going forward!

Yup. Bad as Minnis is, there is no reason to believe “Gravy” Davis would be any better.

If you really believe the only choice is Minnis or Davis, then you've already resigned yourself to there being no hope at all for our country.

Grand Bahama has been locked down for about 5 weeks on this run. and there are still so many cases. Do these lockdowns really work?

no. but the results are backlogged by 2 weeks or so. They make decisions on what was actually 2 weeks ago, doesn't make sense

What other options are there? The labs that conduct the tests are so backlogged, there are only so many tests that can be completed in 24 hrs. Are the tests samples being sent out of the country or are the samples being analyzed in the country ? Even in the States it's currently taking 5-7 days to get test results back.

discard backlogged samples, go to peoples home to check if they have any symptoms, and start over. It is absolutely nonsensical to have backlogged more than 1-2 days. It is just dumb.

Hardly. Every time I go to the store all I see is traffic. Don't look very locked down to me. People seem to be ignoring it alot more than the first lockdown.

And every time you go out, someone else looking at you and counting you in the number of people who just "driving around".

What I've discovered is people are inherently selfish, and I don't mean selfish in a bad way..if that's possible. "My needs/wants are important, but why then other people need to do that during the pandemic only food and water necessary". Its really uncanny. I know someone who was getting all these little white services done that were explicitly disallowed (as in little white lies) but was constantly talking about "hard headed bahamians who cant listen".

Or some just look at the numbers. As I said in my post I see more activity now than the first one. So I don't think people are taking it as seriously as they should this time...

We'll hold on a sec, someone just posted a question.The question is, do these lockdowns really work? The answer is yes, if people stay locked down and stop going to private parties . If you are in your dwelling place , how can you infect others? It's just like school, you will have students whom want to learn , and you will always have the ones whom don't want to listen to the teacher. That same behavior is exhibited into adulthood.

You even sound as dumb as Minnis.

From 78 hospitalized to 61 in a day/day and a half. Either that's good news or someone is clearly playing with the numbers

Someone didn't check the numbers. It's a clear sign that the process for reporting is flawed. They don't report every day. They dont even report on a predictable schedule. So there's no pressure to say get the numbers on by 5 on Mon Tue wed. They just didn't check these, what's worse they provided no explanation for the, once again, inexplicable dramatic change and the reporter didn't even ask.

Freeport reported 10 and 2 the other day and we said ah Freeport is trending down look at those low numbers! Are they trending up because they got 44 today? The analysis is just off. Things weren't perfect when Dr Dahl-Reghis was there, but I think they've lost some expertise that they can't do without. This is a clear negation of the just send all the old people home argument. Its an extremely weird stance proposed by Dr Minnis. The first time he proposed his national agist policy I said did anyone else just hear what he said???? Nobody did apparently. Its not about age. She has a skill that you need. You can't transfer that skill in 6 months. She built that knowledge over years. So here we are with all the energetic young people getting nonsense old data to make decisions on. They look fresh in the pics though.

This is a monster of Minnis' making. We had this thing whipped but he just had to run and open up the country WITHOUT getting proper measures to quickly test and contain travelers. I doubt that we can stay locked down, it's unrealistic to keep locked down when we relay so heavily on tourism. Minnis's comment on it being at least another 6 months of this is far too optimistic in my opinion. All things considered, i personally say we'll be fighting this thing for another year or more. Consider the following:

With this in mind, This constant locking down will not do, we just can't take it. What minnis SHOULD have done (and i hope he's doing now) was use that time we were first locked down to Prepare for traveling and keep things in control. Do whatever it takes to get testing done faster (admittedly this might not be so simple), Order more medical beds and equipment to handle more people, get reserves from the police force to be boots on the ground to not only ensure people use their masks, but also equip them with disinfectant and have them stationed at high traffic places like big stores and government builds where they can spray door handles every so often. It could even be taken a step further and declare that all business places are to convert to automated doors so people won't have to touch door handles. One of the reasons Asian countries like south Korea and Taiwan were able to take control of the situation is because they basically had all these things in place albeit in a more advanced hi-tech manner (they had drones disinfecting areas and massive trucks that blast disinfectant over a massive area). We don't have that kind of capability so we need to use something a bit more simple.

The main issue is discipline. I'm not trying to sound like a old man or anything, but the Bahamian people can't be trusted to keep up with wearing masks and washing hands, Then you have Tourists who show blatant disregard for this situation in their own country (they actually have covid parties&gt;_&gt;) so you can't expect them to have much consideration when they come over here. A stronger police presence is needed to help keep everything in check