A COMIC'S VIEW: Is there a plot to jettison Minnis? His advisers are not making him look too hot 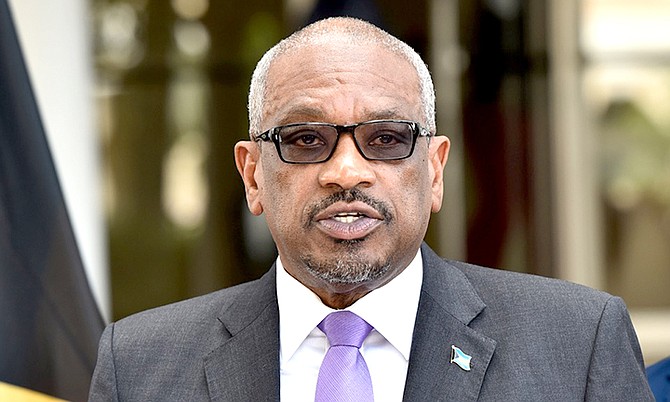 Let me open this week by saying, as a professional comedian with 23 years in the industry, you can’t write the comedy of errors that unfolded before our eyes this week any funnier.

From the PM’s ‘ill advisers,’ to Marvin and Travis jockeying for position, not to be outdone by another ‘prediction’ from the Minister of Tourism (MoT), this week was straight out of an episode of the ‘Twilight Zone’.

Where do I begin ?

I don’t know who’s advising Prime Minister Minnis, if he has advisers.

I firmly believe one has to want to be advised thus having the need for advisers.

No one really knows who the PM’s advisers really are, possibly it’s strategic or it could be embarrassment. I get it, no one wants to own those recent pressers that have become the beacon of more gloom and doom.

I’m convinced the PM reads his speech live, winging it with no pre-press conference read over. Not even a glance. Because if he did, he would have seen two words - “effective immediately” - that would cause the manure to hit the fan in a major way far and wide across The Bahamas.

A simple read over and conversation with his ‘advisers’ would have allowed PM Minnis to make the proper edits to his satisfaction and avoid the ‘excrement storm’ that was.

At this point if I were the PM I would have a private meeting with the Competent Authority to try and figure out ‘who tryin’ to set us up?’

Considering his recent free fall in the popularity polls coupled with his recent inflammatory statements delivered in what the citizenry deems ‘a callous manner,’ the PM appears to be a liability.

Rumours and allegations continue to swirl of an FNM cabinet mutiny. There are also rumours that the hierarchy in the FNM have had their fill of Minnis’ leadership and are prepared to oust him as leader in a last ditch effort to stabilize the image of the party prior to the next general election.

Has the PM become excess baggage? Is there a plot to jettison Minnis? One has to now seriously wonder, considering his advisers have made him look and now consistently sound incompetent. If this pattern continues, it could be a flatline on Doc’s leadership.

Amazingly, after PM Minnis reversed some of his emergency orders on Tuesday (after an obvious sleepless Monday night) MPs came scurrying out of the woodwork claiming to have been the conduit to the PM’s change of heart!

Two MPs in particular made me chuckle. Never one to miss a photo op, Minister of National Security Marvin Dames, on his never ending ‘clout chase,’ took the opportunity to remind his constituents in a press release that he did consult the PM and conveyed their concerns, also giving the impression it was his council with the PM that sparked the change.

I don’t need to hear this banter from Mr Dames, I don’t live in his constituency.

What I do want to hear from Mr Dames is what are the latest trends in designer suits, shoes, eye ware and time pieces. He knows his stuff in this regard.

What I also want to hear from Mr Dames is more about the crime and murder rates being down respectively. (The numbers show the decline in both categories.)

I want to hear more about the RBPF Drone Squad patrolling neighbourhoods and the recent addition of ‘body cams’ to the uniform of patrol officers.

This was long overdue but I commend Mr Dames for getting it done, adding even more accountability and transparency to the RBPF and eliminating any grey areas regarding police arrests and officer involved shootings moving forward.

Not to be outdone, Bain and Grants Town MP, Travis Robinson, early Tuesday suggested his meeting with the PM was the catalyst for the amendments.

Again, like Dames, Robinson is clearly pandering to his constituents and hedging his bets early in an effort to save his seat just in case things go south for the FNM at the polls in 2022.

What I do want to hear more from Mr Robinson on is tourism. Robinson recently offered these comments in regards to the nation’s main industry:

“We are looking at around late October for phase one (of the reopening) and the early part of November, if everything pans out, for the final phase as we go back out and infiltrate the market with the tourism brand of The Bahamas.”

That’s a mighty bold prediction, Travis, considering October and November is known to be our slowest months in the industry. Our major market is the United States which is in its own COVID-19 rut, so nothing will move for us until the US economy stabilizes.

Until Americans want to and are in a position financially to travel, and they have confidence in our tourism product,

‘ain’t nothing happening’. But don’t take my word for it, I’ve only been in the industry 30 years.

Now if Mr Robinson has some extraordinary information regarding the rebound of our tourism industry, please spill the beans I’m trying to get back to Jokers Wild before March 2021.

It has come to my understanding that the MoT Mr Dionisio D’Aguilar is a huge Laker fan, which is a red flag for me as a fellow Laker fan.

Here’s why. D’Aguilar is zero for two in his last two bold predictions regarding the lockdowns. He’s become what the old folks call a ‘jinx,’ putting ‘mouth’ on everything.

Mr D’Aguilar it’s been seven long years as you know, since our Lakers have been in the post season, please on behalf of Laker fans throughout The Bahamas, don’t say a word pertaining to the Lakers, especially anything about us winning!

If you are a true Laker fan D’Aguilar let your conscience be your guide. You know you are on a cold streak - you can’t even predict the day of the week right now - so no need to predict anything Laker related... unless you pick the Lakers opponent to win!

Its hard to make a pig look like a Victoria Secrets model!!

This is good. Entertaining and informative. On the D'Aguilar bnb it, let's keep him off CNN. He set us back to Harriet Tubman days before the underground railroad.

Typo, bit not bnb it

Minnis Stalin having it rough.

While Minnis might be doing a terrible job directing Covid-19 from a party perspective, he’s taking instructions and following a defined script. While his presentation is not “Obama smooth” there is nothing he can do with Covid-19, nor bring relief to the cries of the public . Covid-19 operations (covert in nature) is designed to be a quagmire, deliberately meant to harm our lives and livelihood. Getting rid of Minnis (even tho I don’t care), well, that won’t change a thing, at least not for any one of us except the sly fox’s behind the scenes within his party, but not for us.

I totally agree.Dion Foulkes too please.

Dr.Minnis 's advisors are not making him look bad.He is doing that by himself.

He does not readily take advice.He does not understand the impact of the decisions he makes. Some of his decisions are made without consultation of his cabinet ministers.Last week's lockdown was just a next one of them.The vat rate in 2018 was a next one.

He will survive in this climate.The opposition party is discredited.He retains the support of the party and most of the media in the Bahamas.But like an academic said,he does not understand public policy,governance and the economy.