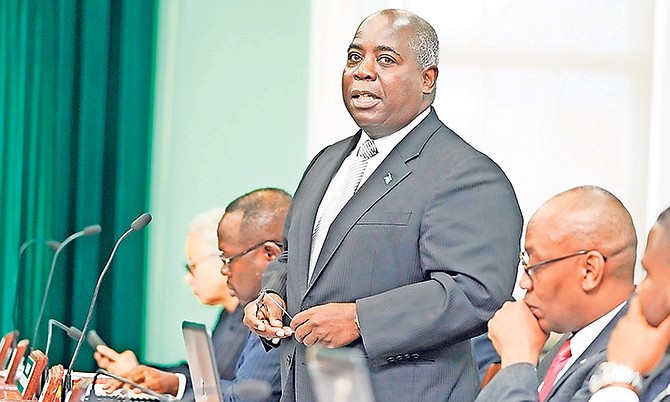 Meanwhile Central and South Eleuthera MP Hank Johnson has also tested positive for the disease and is in hospital in New Providence.

“The last few days have been especially difficult for so many Bahamians,” Mr Davis said in a statement released by the PLP. “Please stay safe and look out for one another. Let’s continue to take care of ourselves, our neighbours, and our families.

“As many of you know, my daughter Philippa is a very senior doctor in the United States. She would like me to be close by as I complete my treatment.

“After a family discussion, I have decided to fly to a hospital in the United States. I wish to thank the doctors and nurses and all the support staff at Doctors Hospital, who have looked after me so well.

“I am in close contact with colleagues and friends and will continue to monitor what is happening in our country.

“I pray God’s continued blessings on us all. I miss you all and look forward to being with you again soon,” Mr Davis’ statement noted.

PLP deputy leader Chester Cooper released a statement saying party officials “will continue to respect the privacy of the leader and his family, and urge all others to do the same.”

“The leader, his family and the party would like to thank everyone for their love, support and prayers during this time,” he said.

In a voice note on Sunday, Mr Davis revealed he had tested positive for COVID-19 and had been admitted into Doctors Hospital for care.

Yesterday, former PLP Cabinet minister George Smith said he spoke with Mr Davis on Wednesday, adding the PLP leader appeared to be “in fine form” when they last spoke.

“I spoke with him on two occasions, he’s very communicative and I’m told by a colleague of his in the men’s group he belongs to that he’s in good form, he wants to recover to get back to the work at hand so he’s taking advantage of the opportunity to mend quicker than what would happen if he stayed here,” Mr Smith, former Exuma MP and a PLP stalwart councillor, said.

For his part, Mr Johnson released a statement yesterday confirming that he too has contracted COVID-19.

He is also in hospital receiving treatment for the disease.

“I am currently hospitalised in New Providence,” Mr Johnson said. “I thank the medical staff for their skilled and detailed care of me and all the Bahamians battling this illnesses.”

Lol I’m really enjoying this story! Lol. Can you guys tell? It’s strategic and tactful the way Brave Davis and other politicians play the Bahamian public like the fools they are. They entice you with all the rubbish y’all dumb asses like to hear.... only to get your vote so that they can align themselves and their family members with the best opportunities available! You have my applaud Brave! Bravo! Bravo! Well played!

How can anybody, including The Tribune, continue to call this weasel “Brave” after what he’s done? He’s proved, for one final time, that “Gravy” is his true name: He slurps up the gravy, and average Bahamians, if they’re lucky, get to lick his napkin.

Lol. Why you mad at Brave??? He’s only doing what all Bahamian politicians do! Don’t you remember Perry Christie did the same thing when he got sick??? He flew straight to Atlanta! Lol lol lol.

Such a vote of confidence!! Must be a very proud moment for the 'Brave' one...

The best part is his supporters on social media arguing and berating everyone on social media who may have an opinion on the political optics and satire of this decision but a few weeks ago was running on about which fnm's were on vacation while the people lockdown. Lets not forget about their chairman.

Brave turns his back on " Dumb Bahamian Doctors and Fantastic State Of The Art Medical Facility", that's what the headline should read. This is so u acceptable for our second I. Command to betray the Bahamian People in this way. Politically , he should resign and let Me. Cooper take over because there should be no turning back for the Bahamian people on this one. How can you face your PLP supporters ? This is a total Betrayal of a national son whom believes in PMH and it's component doctors.

If his daughtre was concerned she could easily speak with the Bahamaian doctors and nurses to ennsure he was getting the proper care.

No need for Brave to go to the US unless he genuinely felt that the Bahamians treating him were inferior to those in the US.

I pray for all of the best for him. I wish him Godspeed.

And if it is the God who made us all will. He will return to good health.

... birdie, you may not know this, but God tries to disassociate Himself from people like "Brave".