Lockdowns Have Worked For Us, Says Thompson 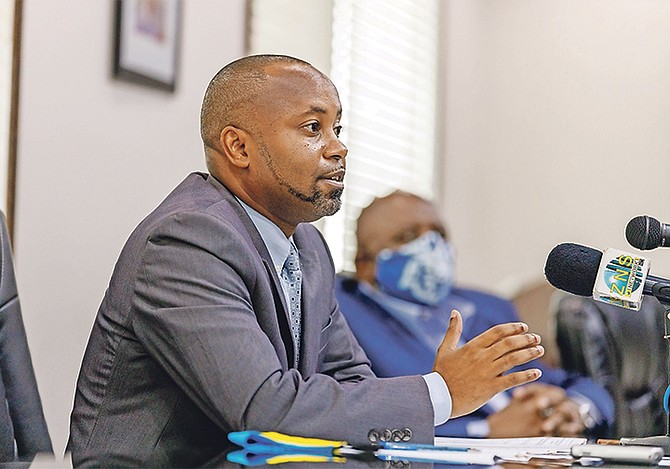 Minister of State for Grand Bahama Senator Kwasi Thompson said the lockdowns have worked for Grand Bahama, where they are now seeing a reduction in new COVID-19 cases, as well as cases in the hospital.

“The lockdown recommended by the medical officials was necessary, he said prior to the prime minister’s national address. “Our hospital and ICU beds were at capacity. The Prime Minister took immediate action to save lives.”

He further reported: “We have begun to see a reduction in the number of new cases which Grand Bahama is now experiencing. The lockdown has worked for Grand Bahama. We no longer have cases spiraling out of control and have seen a reduction in cases in hospital and visiting our emergency rooms in Grand Bahama.”

Minister Thompson said the COVID-19 second wave caused a real crisis in Grand Bahama, where the numbers had escalated in a few short weeks from eight to now having over 500 active cases.

As a result of spike in cases following July 1, the Prime Minister imposed a two week lockdown in Grand Bahama on July 23 to August 7, which was extended for another 12 days to August 19, and further extended one week to August 24.

Non-essential businesses were lockdown for five weeks, and small business operators feared that another week would put them in financial crisis and called for the lockdown to be lifted so they could resume their operations, under the COVID-19 protocols and guidelines.

A letter on behalf of 180 businesses were sent to the Prime Minister on Sunday, calling on him cease and desist from lockdowns and meet with small operators to discuss a plan for the way forward and to reopen business.

Mr Thompson noted that said that assistance programmes for small businesses were available to business owners during lockdowns in Grand Bahama “to help them survive, such as small business grants, business continuity grants, tax deferrals, and NIB unemployment for self-employed persons.”

“This meeting was very fruitful and some plans and suggestions for the way forward were discussed. The Chamber has also been provided with a draft Ministry of Health Workplace guidelines to operate during Covid-19.

“We are prepared to have further discussions with GB Port Authority business licensees and the GB Chamber who represent the private sector and business community in Grand Bahama. In fact, the cooperation of the business community will be key in continuing to combat this virus,” Mr Thompson stated.

“The Prime Minister has always been guided by the health professionals and the medical data. However, he has also stated that it must be balanced with rebuilding the economy. This is also true in Grand Bahama. We must open the economy, but it must be done in a safe and responsible way.”

Meanwhile, Deputy Prime Minister Peter Turnquest said representatives from the group of small business operators were present and had the opportunity to receive answers to all their questions.

“The PM will address the nation this evening. The representatives were advised to pay attention to then PM’s and Health Teams address rather than to speculate.The government remains available to meet with any legitimate group or individual to discuss their concerns,” Mr Turnquest said.

GB was given notice. The issue was no notice being given.

They can't even get their spin right.

So, Kwasi, if you have credible evidence lockdowns working whats with the concealed. beyond talk proof brungs about reversal? Nod Once for Yeah, Twice for No?

Thompson is a masterful liar without shame

Never agreed with Kwasi before but he is correct. The lockdown most definitely worked. I don't think Nassau is even close to being under control though and doubtful it will be in a week. I suggest minnis stick to his guns if cases don't subside by next week though. Aint like he has to worry about losing next election anymore, that's pretty much assured, he will lose. Might as well do the neccessary...

Few have argued that curfews and lockdowns do not work, in fact, the exact opposite needs be said.

Did Tal really post a coherent sentence? Can someone pls translate back to Tal speak.

Grammatically still challenged of course, but yes, it is readable.

The question is what will the government do next? It must have a plan to test frontline staff (police, nurses and doctors, immigration and customs officers) more often because that is where the major spread has come from.

Business will not survive anymore lockdowns and there should not be a need for anymore if the government would test these workers on a regular once or twice a week basis.

One can praise the lockdowns and curfews if you ignore the damage to the economy. Direct damage to tourism, direct damage to local businesses. The same confusions stemming from the multiple orders and amendments for G.B. were repeated in the abrupt Nassau Lockdown, which was aborted. They learn nothing from their mistakes. They learn nothing from repeated hurricanes. Grants for Coconut vendors? There will be a spike in private yard coconut tree raids! Guarantee they don't grow them or buy them!