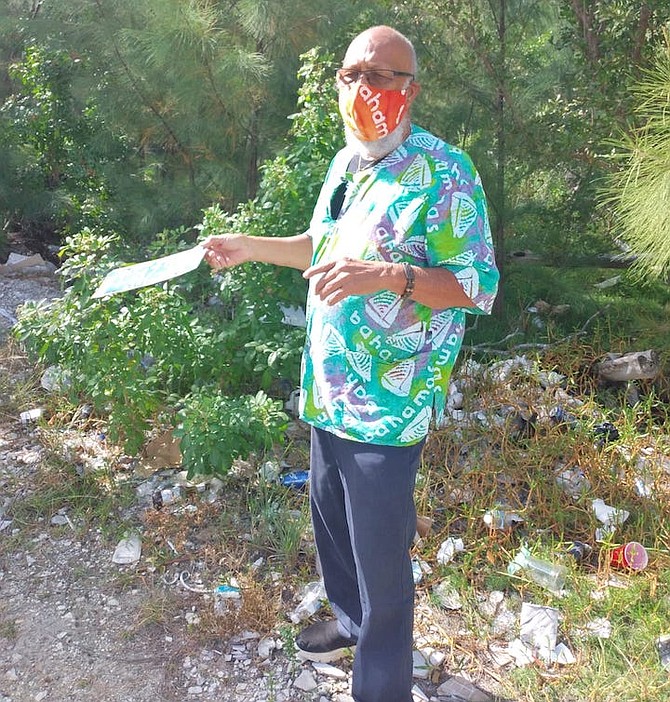 JOSEPH Darville with some of the garbage.

A LOCAL environmental activist is disgusted by the enormous amount of litter discarded by residents in the area at the waterway at Port of Call Drive, Freeport.

Joseph Darville, of Save the Bays and Waterkeepers Bahamas, was shocked and dismayed at the deplorable condition he and volunteers saw during a visit in the area last week.

“Waterkeepers Bahamas and Save the Bays come out regularly to tour the canal system in Freeport and Grand Bahama to pick up trash along the shoreline of the canals. And we saw all this incredible amount of trash all over the place,” he said.

Mr Darville said they collected 12 six-gallon bags of trash, but ran out of bags and could not continue due to the overwhelming amount of trash in the area.

“We found everything from condoms to even pregnancy test kits that were left here, he said. How could this be tolerated?”

The area – which is a dead-end at Port of Call – is a popular party spot for locals. There is also a boat ramp to the canal/waterway for fishermen and boaters. 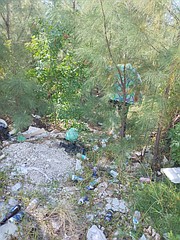 Mr Darville believes that it is very irresponsible that persons would just discard their trash in the area, which is also near to the canal and shoreline.

“Debris was absolutely everywhere and there was everything imaginable here on the ground, right next to the canal,” he said.

With heavy winds from the southwest, Mr Darville said that trash on the ground will be blown into the canal system and taken out to sea when the tide ebbs and pollute the coral reefs.

“It is absolutely despicable and reprehensible, not one inch of the ground is free of garbage,” he said.

Mr Darville said he has sent videos and pictures of the truckload of garbage they picked up in the area to the DEHS. “I didn’t even get an acknowledgment from them,” he stated.

“We had to give up (cleaning the area) because we had to clean the canal system. So, what we are planning to do as an organization is to get some bins and put Waterkeepers GB and Save the Bays on them, and station them in that area.”

“But we got to teach our people before we begin to punish them because they don’t know what this does,” he said.

Mr Darville explained that plastics and litter discarded in the area takes a long time to disintegrate.

“I think there has to be an environmental tax that punishes companies that bring in all these things and then distribute them,” he said. And as you can see here they are still using a whole lot of plastic bags that have been prohibited which means that some companies are still using these bags,” he said.

Mr Darville said that monitoring is needed in the area.

In the meantime, he said the area has to be cleaned up. He recommended that the Ministry of the Environment hire persons, many of whom are unemployed in Grand Bahama, to clean the area.

“We cannot tolerate this. So, definitely, it has to be cleaned up, and the Environmental Department and GB Port Authority should both see to it that it is cleaned up.”

An official at DEHS said they are aware of the situation and had sent officers to investigate.

“We looked into the situation, and our officers found litter there, and it has to be cleaned up,” said Mr Cohen.

When asked about monitoring, Mr Cohen said: “We used to monitor the areas, but we have not done it for a while because of transportation constraints.”

“We have assisted (in that area) from time to time. I have alerted our crew about it, and they will go out there and deal with the matter. Those persons who use it are not only trespassing but also littering,” she said.

Mrs Wilchcombe stated that the KGBC continue to appeal to the public and to persons who use the resources for their enjoyment about the importance of protecting the environment at the same time.

She stressed that persons who litter think that it is someone else’s responsibility to clean it up.

“We don’t want to be constantly cleaning up after people. I know there is one receptacle in the area, and we will have to look at that tomorrow, but people have to be responsible and develop a sense of pride.

“I can’t blame it on COVID-19; I think, unfortunately, in our society we feel that it is someone else’s responsibility. I know how much effort and funds we spend to keep our city clean,…so it is not for lack of trying.”

“We have placed signs, and while we put up signage, it still doesn’t, unfortunately, resonate enough. It all boils down to enforcement and being able to catch persons in the act, and also residents reporting individuals to the authorities as well,” Mrs Wilchcombe said.

She noted that litter and indiscriminate dumping in undeveloped areas is a big challenge in Freeport and Grand Bahama.

Get used to it Mr. Darville. The problem exists on just about every inhabited island in the archipelago, I have travelled to most of them. Cleanliness is next to Godliness must have gotten lost along with all the other values Bahamians have lost or misplaced over the last fifty years.