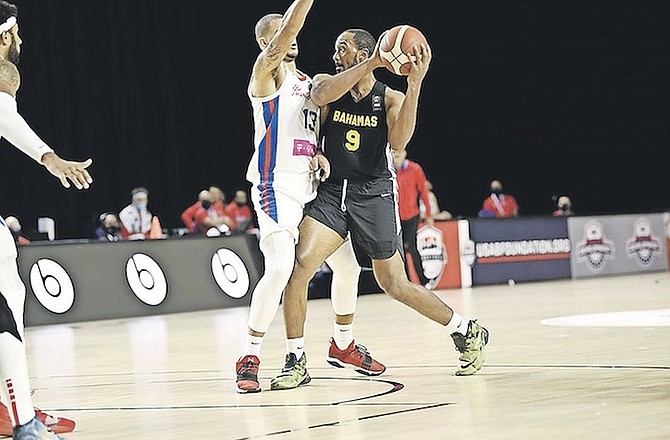 The Bahamas went scoreless in the final 5:43 of the game and was outscored by 10 in the fourth quarter of a 91-85 loss to Puerto Rico yesterday at the Indiana Convention Centre in Indianapolis, Indiana.

Taylor’s jumper gave the Bahamas an 85-76 lead with 5:43 left to play and the Bahamas appeared well on its way to a split after Sunday’s loss to the United States.

What followed for The Bahamas was a series of miscues that allowed Puerto Rico to erase the eight-point deficit and close the game on a 15-0 run.

The Bahamas’ final possessions of the fourth over the course of the final 5:43 featured six turnovers, including four on consecutive possessions, 0-5 shooting from the field and four missed free throws.

In an evenly played first quarter, Puerto Rico opened the game on a 6-0 run before the Bahamas came back to tie the game at 12 on a Taylor three pointer.

After a Paige layup, Rolle would give The Bahamas their first lead of the game with his three on the ensuing possession and the teams eventually took a 17-17 tie into the second.

The Bahamas had its best scoring period in the second when they outscored Puerto Rico 30-24. Willis Mackey’s three gave the team a 32-25 lead with 5:31 left to play in the half. Jaron Cornish made a three as time expired and The Bahamas took a 47-41 lead at the break.

The lead reached nine early in the third when Taylor made a trio of free throws for a 50-41 lead at the 9:45 mark.

The Bahamas still managed to take a 71-67 lead into the fourth. The lead reached as much as eight in the fourth quarter.

Mackey and Smith were both unavailable for Sunday’s game against the United States but made an immediate impact as the Bahamas’ roster increased to 10 players against Puerto Rico.

“We just need to learn to stay with what we were doing. The whole game we were doing a lot of good things, running our sets pretty well, and I think at the end we just kind of forgot what were doing that was successful at the beginning,” Mackey said. “But I think that will be an easy adjustment for us in the next window - running our stuff and realising what’s working.”

With the loss, The Bahamas dropped to 1-3 at the group stage of the qualifiers and moved into a tie with previously winless Puerto Rico.

KENTWAN SMITH finished with a double double - 10 points and 12 rebounds.

In the next window of qualifiers, The Bahamas faces The United States on February 18, followed by a February 21 matchup against Puerto Rico.

The Bahamas would need a win over Puerto Rico or two losses from Mexico to have an opportunity to qualify. The Bahamas holds the tiebreaker over Mexico by the aggregate score of the first window last February.

The top three teams from each group will qualify for the FIBA AmeriCup 2022. AmeriCup is the FIBA Americas championship. The US won the last edition of the event in 2017.

You can’t win them all.