Bowleg: ‘I still want to commend the players who were available. They went out there and played their hearts out’ 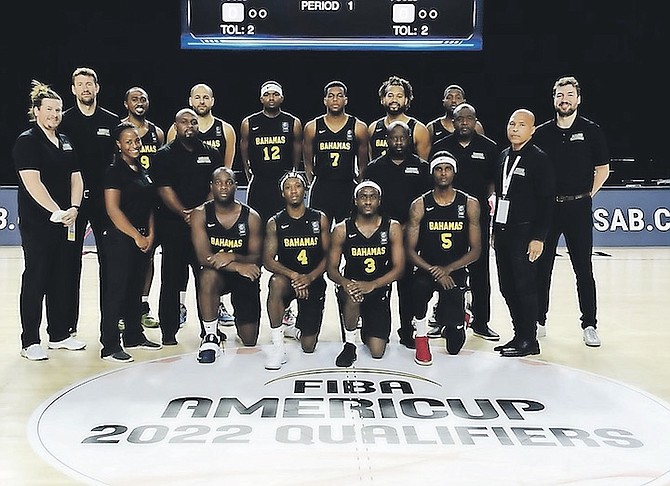 MEN’s national basketball team members in the bubble at the FIBA AmeriCup 2022 Qualifiers in Indianapolis, Indiana.

BAHAMAS Basketball Federation President Mario Bowleg admitted that the men’s national team could have played better than they did against the United States of America and Puerto Rico in the bubble in Indianapolis, Indiana.

After getting trounced 99-59 to the USA in game one of the FIBA AmeriCup 2022 Qualifiers on Sunday night at the Indiana Convention Center, Team Bahamas returned to the court Monday and lost 91-85 to Puerto Rico.

On his return home after he and Moses Johnson assisted head coach Chris DeMarco of the Golden State Warriors, Bowleg said although they only had 10 players in uniform, they gave it a gallant effort in both games.

“We felt that if we had Kentwan Smith and Willis Mackey Jr available to play against the USA, the team would have played much better,” he said.

“But I still want to commend the players who were available. They went out there and played their hearts out.”

Smith and Mackey, who play in Europe, were affected by the ruling of the USA government, which had tightened their restrictions on visitors from that area due to the coronavirus pandemic. But Bowleg expressed his gratitude to the Bahamas Consulate, who assisted in getting the players into the USA so that they could at least play in the final game.

He noted that the other players they wanted to bring in would not have made the requirements in the bubble in time.

With both Smith and Mackey in uniform after taking the four necessary COVID-19 tests before the game was played, Bowleg said it showed in their final outcome against Puerto Rico. “We just have to take care of the ball better at the end of the game,” Bowleg said. “We were actually leading this game against Puerto Rico, but we didn’t handle the ball the way we should down the stretch and it cost us the game. “As we prepare for the next window of the qualifying process in February, we have to try and find a way to get our better players available to play in those games.”

Immediately, Bowleg said the federation will be contacting the various leagues that the Bahamian professional players participate in and to ensure that they are released in time so that they can compete for Team Bahamas.

He noted that there are a list of 24 players who fit that criteria and once they can get their release, Bowleg said it will be incumbent upon the federation to get the team to play in at least two scrimmage games to develop the cohesiveness that they will need by the time the next window rolls around.

It’s not certain yet as to where the next round will be played as countries have been invited by FIBA to bid on hosting a bubble, similar to what was done in Indiana.

However, Bowleg said the federation doesn’t intend to put in another bid, as they were already turned down when they made a previous request to the Bahamas Government to host the first bubble that they just played in.

“We’re just going to reach out to the 24 players available to play,” Bowleg said.

“Once we can confirm the team, we will do whatever is necessary to ensure that they can get sufficient time to work out together as a unit.”

The Bahamas will have to beat Puerto Rico by more than six points in order to finish in the top three to advance out of Group D to the FIBA AmeriCup 2022.

The USA remains undefeated at 4-0, while Mexico is second at 2-2, Puerto Rico is third and Bahamas fourth, both at 1-3.