An Extra Hour Before Curfew In New Rules 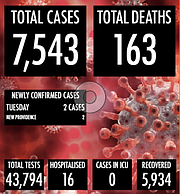 NEW Providence and mainland Abaco have been placed under a 10pm to 5am curfew, according to the latest Emergency Powers Order.

Previously, the islands were on a 9pm to 5am weekday curfew and a 6pm to 5am curfew on weekends.

Outdoor dining is allowed between 6am and 9pm from Monday to Saturday. Food services are still limited on Sundays and can only comprise drive thru and takeaway services.

Additionally, the competent authority has lifted the 24-hour curfew for Exuma and Eleuthera. A curfew for both islands remains in place between 10pm and 5am Monday through Sunday.

The curfew in Grand Bahama has also been changed from 9pm to 5am daily to 10pm to 5am.

According to the Order, schools can operate with either virtual or face-to-face learning so long as the institution providing the later service has been given permission from the Ministry of Education.

The further relaxation of restrictions comes as the Ministry of Health recorded only two cases yesterday. Both cases are in New Providence.

Last week, Health Minister Renward Wells declared in the House of Assembly that Bahamians are flattening the COVID-19 epidemic curve.

“While it is true that the entire Bahamas only experienced one complete lockdown in April, 2020, other islands such as Grand Bahama and Bimini, experienced lockdowns for some two weeks to control the spread of the virus on these islands,” he said at the time. “Controlled weekday and 24-hour weekend curfews have been most effective on the islands of Eleuthera, Exuma, Abaco and New Providence to bring the overall transmission down, ‘flatten the curve,’ reduce infections and avoid overwhelming our treasured health care system.”

The order also allows New Providence grocery stores to open on Sundays from 6am to 9pm.

The curfew is no longer about COVID-19 but rather the prevention of looting and rioting by many jobless, oppressed, hungry and desperate people who have lost everything (some even their lives) thanks to our most incompetent leader and the appalling way in which he has mishandled the COVID-19 crisis.

I do not know about rioting.. looting, jobless, oppressed, hungry and desperate people have been here long before covid-19. Minnis did not start any of what you talking.

Not in the numbers that exist today.....the numbers today are staggering and getting worse by the day.

Oh puleaze, give it up Minnis. Let The People be...

The Virus, which the PM keeps insisting is his need for ongoing unconstitutional so-called "emergency" powers, DOES NOT TELL TIME!!

Most citizens are so confused by the PM's attempt to dance backwards and forwards and around we go again, they do not know what time it is, much less which day it is. The Man should really get a life!

The man is drunk with power. He gives one extra hour instead of going in by 9.00 one must be in by ten.

But the most grievous offence of all is to tell Pastors what hours they are able to keep their services. and they all fall for it.

Many Church people have stopped going to church. It will be challenging to have them return.

Church services are allowed from 7 to 1 on weekends they had better be out of the church by one o clock sharp.

But in Nassau Food stores can stay open until 9.00 pm

With this kind of reasoning, the Bahamas is in deep trouble. The thought process in definitely not present.

The Church closes at one. but the food stores close at 9.00 on Sunday

2cases in the whole country on the 1st. 2 cases out 200 tests conducted. In eleuthera the cases and Exuma the cases had only dropped before lockdowns occurred. They are only effective to encourage people not to seek tests as their community and livelihood is punished if they test positive. At this point people must push to have their freedom returned to them. The emergency powers have now been named ‘risk management orders’ - that does have ominous order to it...