ALTHOUGH the country has not recorded daily COVID-19 deaths for several weeks, some funeral homes say they are still seeing a major uptick in overall deaths which they are attributing to an overburdened health care system.

Bahamas Funeral Directors Association President Kirsch Ferguson told The Tribune yesterday that COVID-19’s impact has had far-reaching consequences, one that has affected the nation’s death rate.

His comments came as the country continues to see a decline of confirmed COVID-19 infections as well as virus related deaths.

As of Tuesday, the COVID-19 death tally in The Bahamas stood at 163, with 23 deaths still under investigation.

The last day the country recorded a COVID death was on November 9; the patient was a 78-year man from Grand Bahama. His death was announced in the Ministry of Health’s November 14 briefing.

He believes this increase is a direct result of the COVID-19 crisis and its strain on the healthcare system. 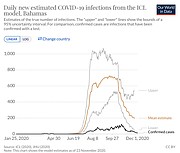 With so much attention fixed on the pandemic, the BFDA president said he believed many deceased victims were ill patients who were not able to receive proper hospital care due to COVID-19 fears.

“From our perspective as mortuary administrators, even though there is a decline in COVID deaths, because the health care system was already overtaxed, we’re seeing more deaths coming to us for persons who are not being properly cared for such as heart ailments, strokes and the like,” he said.

“I don’t think the proper care is being administered based on the severity of COVID cases in The Bahamas, persons coming in with hospitalisations and the like so the death rate has increased based on the fact that persons are not being able to be treated or just admitted into the hospital based on the fear of COVID.”

In October, health officials admitted that tough decisions will have to be made concerning the patients that will be given priority care if the country’s healthcare system continues to operate beyond its current capacity amid the COVID-19 pandemic.

However, since then, the country has seen a sharp decline in both COVID-19 numbers and hospitalisations.

While COVID-19 cases have since trended downward, overall deaths in the country have not – a situation that has led to overcrowding in both hospital and funeral homes’ morgues, The Tribune was told.

The latest COVID-19 measures for New Providence and several other Family Islands on funerals limit services to graveside or internments only, with a maximum of ten attendees present outside of those officiating and mortuary workers.

Because of the strict protocols, Mr Ferguson said some families continue to delay or postpone services for their loved ones.

“The situation has improved but families are still a bit apprehensive with just planning a service and setting a definite date. It’s almost like a wait and see game,” he said. “…We’ve had bodies in mortuaries like mine in particular for over two to three months. It could swing into next year but at the same time, families are not coming in presently and saying, ‘We want a funeral early January or February.’

“But you know the standard wait time was two weeks but that’s prior to COVID but now you see that turn around being four to six weeks in the first instance and it is adding to the backlog at funeral homes in particular.”

While Prime Minister Dr Hubert Minnis has already noted funerals to be a “greater risk of socialisation”, some observers still question the rationale behind his decision to keep restrictions imposed on funerals especially considering the fact that church services can now be held.

Asked about the association’s thoughts on the matter, the BFDA president replied: “We can’t give a scientific explanation of that other than it’s what the emergency orders call for. We would like for it to be otherwise, but we are under the mandate of what the law prescribes to us.

“Now, because funerals are considered public gatherings—social distancing can be practised in churches—but the science behind it I can’t speak to it because it’s obviously much more than we are being told. So, we’re just going with what is generally put to us which is graveside services.”

However, he added the organisation has already contacted the Prime Minister concerning their recommendations for funerals to be held in the sanctuary and are still awaiting to receive a response.

“From day one when this pandemic came upon us, we were in constant communication with the PM’s office and the like and from the Prime Minister’s own declaration in the House of Assembly or I think it was a press conference when he said he would be reaching out to the funeral directors association. We have been constantly sending our communication to the PM for recommendations we think would be most adequate for families here in The Bahamas, but to date, there we haven’t received any response, none whatsoever unfortunately.”

The title of the article asks a question, which the article fails to answer. There is speculation that the numbers have increased, but no actual data. This is probably one of the most important questions to answer. If we have not seen a general increase in deaths so far this year against the last few years was all the shutdowns worth it. If we have and the shutdowns reduced the deaths then the arguments for the shutdowns is much stronger. Please writer at least answer the question next time.

Our most incompetent authority has literally killed untold numbers of Bahamians while at the same time unnecessarily destroying the non-tourist dependent segment of our economy and crippling the minds of our young children by keeping them out of school.

As the colony continues to officially see a decline of confirmed COVID-19 infections as well as virus-related deaths - or so. says the politically-elected not exactly known to be a truth sharer data much believed have been wiped clean in spots before what is shared with the PopoulacesOrdinary at large. POAL. Shakehead a quick once for upyeahvote, a slow twice for not satisfied the evidence favors the distribution of a vaccine by seafaring mailboats, and the Colony's airplanes lateness scheduling, goin' much differ than was the dismal response to Hurricane Dorian, Their bold lies continue to this moment about the dealings over at The Lucayan Hotel Resort?