Insight: It’S A Tough Time For Bahamians - And It’S Not Getting Easier Any Time Soon 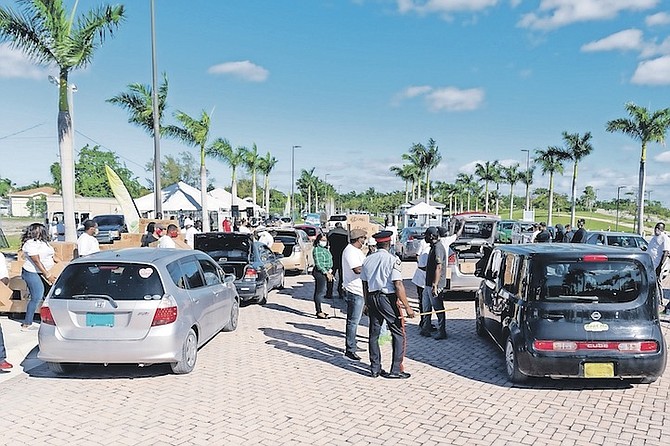 THE ISLAND Luck IL Cares giveaway on Thursday saw people queuing from as early as 5.15am for an event due to start at noon. Photo: Donovan McIntosh

THOUSANDS of Bahamians turned out at Island Luck’s food giveaway on Thursday. Boxes of foodstuffs containing cereal, cream, sardines and other budget-friendly cupboard fixtures all but evaporated by the event’s scheduled start time at noon. This was very telling of the tremendous difficulties faced by Bahamians, many of whom haven’t worked since March when the World Health Organisation declared COVID-19 a global health crisis. Before the sun rose, they lined up for hours and still left empty-handed. While some were grateful of the gesture, others left disappointed but hopeful to get lucky this Thursday when the event takes place again.

The government announced last month it would support the National Food Distribution Taskforce by funneling another $10m toward the second phase of the initiative taking its overall contribution up to $26m in total. Other groups in civil society have also been chipping in with these efforts but it’s still not enough.

Everywhere you turn, you hear of the immense suffering of Bahamians.

It is worrisome that many of us are unable to fathom that 2020 is not a year that we can look at in isolation. We may be on the precipice of a very incredibly difficult period that we unfortunately are ill-equipped to navigate.

Throughout history, periods such as the Great Depression, although it sparked great innovation, it lasted for a decade inflicting many economic casualties in its course. For its part, the Great Recession lasted for a year and a half and took years after that for the US economy to regain full strength.

A nation such as ours which is so incredibly dependent on tourism could not have found itself in a more difficult circumstance. It has been no small undertaking by the ministries of health and tourism, along with the hotel sector, to produce protocols and adopt the technology to make it as safe as possible for tourists to visit The Bahamas.

And with outgoing US President Donald Trump’s laissez-faire attitude towards the pandemic, the virus has spread like wildfire in our primary source market. Though many still credit him for Operation Warp Speed, much of the damage had been done as he was not in lockstep with the rest of the world on tightening protocols to mitigate the spread of the virus.

Now, as President-elect Joe Biden is faced with the question of what he is going to do about it, a few things can be ascertained. First, we can glean that his primary goal is to address the mess that is COVID-19 with the focus of keeping Americans safe. His request to keep top infectious disease specialist Dr Anthony Fauci on board and as a key member of his COVID-19 task force and a chief medical advisor lets us know that the US is ready to arrive to the party.

However, we’ve been at this party for a long time. The DJ has played our favorite song a few times too many and the drinks are becoming watered down. We need relief and we need it quickly. We need our resorts filled and downtown merchants and restaurateurs providing elite-level service to our visitors who we hope would spread the word and let the world know that The Bahamas is back in business.

However, we know that this is not what’s going to happen.

Another focus of the incoming US President will be to revive their economy. With Congress getting close to an agreement on a nearly trillion dollar stimulus package for Americans, you can bet the goal is for that funding to be recirculated into the economy and not on vacations overseas – which is perhaps the best thing for their country, despite where that may leave us. Possibly, for all of 2021, we can expect to see strong “America first” policies coming out of Washington, DC.

And as long we’re still subject to travel advisories and the optics they bring, our case won’t be helped much.

Last week, with the US topping 14 million COVID cases and more than 2,800 deaths in one day – the highest recorded since April - Fauci’s prudence remains intact as he calls for more stringent travel advisories during the upcoming Christmas Holidays. Although Americans were advised not to travel for Thanksgiving, more than nine million flouted the recommendations given by the Centers for Disease Control and Prevention.

In an interview with NBC’s “Meet the Press”, Fauci said, “I think we are going to have to make decisions as a nation, state, city and family that we are in a very difficult time, and we’re going to have to do the kinds of restrictions of things we would have liked to have done, particularly in this holiday season, because we’re entering into what’s really a precarious situation.”

Bad news for us is that this is what would typically be high season in the hospitality industry. But a new normal is upon us I suppose.

On the bright side, President-elect Biden seems resolute in coming in and attacking the virus the way it should have been handled months ago. We just hope that until travel returns to a level we can confidently begin to climb out of these dire straits that our citizens can still be fed and cared for.

The strain on our financial well-being and our mental and physical health cannot be overstated.

While we should still be grateful for our government showing its commitment to feed families and support Bahamians, sometimes the bureaucracy, red tape and convoluted processes too often serve as hindrances. Companies in the private sector going the extra mile to help our brothers and sisters in a meaningful way is something we wish to see continue. More than a wish, it is at this point, a necessity.

Getting through this together is our only solution.

"Getting through this together is our only solution". I agree with that sentence; however that type of cooperation should have emerged nationwide since March of this year. We are now at "the precipice of a very incredibly difficult period that we unfortunately are ill-equipped to navigate" and the evil haves are still preying on the unaware have-nots. First world countries are leading the way in turmoil, lockdowns, and general chaos. Since we are dependent on them for our income and food we are simply out of luck, and we are firmly in the hands of our financiers who apparently with jubilance eagerly enforce austerity. We are now fubared for years to come.

You should be much more concerned that Minnis has been 'bought' lock, stock and barrel by the Communist Chinese Party in much the same way Christie was bought by them. Our corrupt politicians have sold us out to Communist China and our new yellow masters could not care less whether we voted for the FNM or the PLP candidate because they now literally 'own' both of those corrupt political parties.

Just like the Russian revolution the Chinese revolution was also funded by financiers. Governments are the muscles of the financiers. A change of master is just a change of which muscle pushes us around.