Back To School In February - But Safety First, Says Lloyd 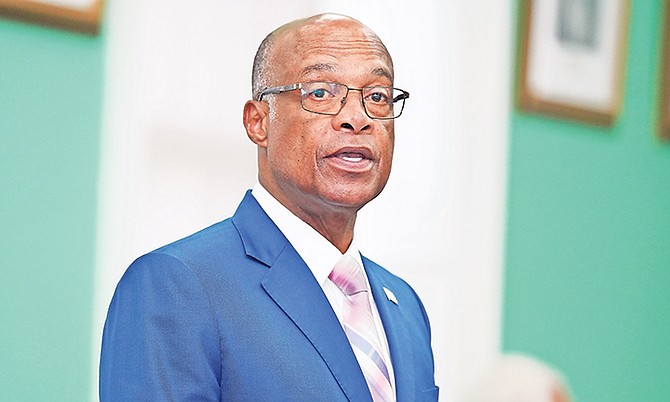 MINISTER of Education Jeff Lloyd expects face-to-face learning to resume in all public schools by February 2021, with institutions in New Providence and Abaco likely to start with “blended learning” environments.

“We are working with the Ministry of Health and the health officials and they want to get past Christmas and, you know, see whatever comes out of that Christmas experience and then possibly (we’re going to be) looking somewhere around early February,” he said, when asked when face-to-face instruction would resume.

He added: “We’ll be back to face-to-face in the early part of the new year. Soon as the Ministry of Health gives us the okay and we’re ready to move and we’re more than likely gonna be starting in New Providence and Abaco with blended learning.

“Now there are some schools because of the size of the population, they can go face-to-face 100 percent, but naturally that means that there are fewer students and there’s more space but the bigger schools like Anatol, CV Bethel, Doris Johnson, more than likely we’re gonna begin with blended learning in the initial stages.”

An Emergency Order released last week said schools can now operate with either virtual or face-to-face learning so long as the institution providing the latter service has been given permission from the Ministry of Education.

Asked how many schools have applied for permission since the new order was issued, Mr Lloyd said he could not say offhand but added there was interest from several private institutions.

“As many as there probably are, especially private schools that is, and private preschools and early childhood you know years—I can’t tell you the numbers. Every single day we’re receiving five or six (to) me personally,” he said.

“Then you, of course you got the permanent secretary and the director who themselves also (are) receiving requests.”

He said in order to receive permission to resume in person instruction, these schools must be registered and their COVID-19 plan has to be reviewed.

While there are concerns about students falling behind this year due to COVID-19 restrictions, Mr Lloyd assured work is being done by teachers to assist these students.

He told the media at the House of Assembly: “That’s why our teachers are so dedicated and deserve all of our praise because they have been working overtime to (help) those students and we are now right this minute. . .devising strategies as to how we can remedy that and as you know traditionally students who have not met the minimum requirements in a particular year – there’s the summer school.

“So we have the summer, we have the breaks during Easter breaks and so on. All of those and every other conceivable, creative tactic will be employed to make sure that our students do not fall through the cracks.”

Public schools across the country reopened on October 5, however, those in New Providence, Abaco and Eleuthera were only allowed to offer virtual learning. Some private schools on these islands have adopted a hybrid model, allowing virtual and on campus learning, while a few offer face-to-face learning.

you better wait late spring early summer for the vaccine. with no vaccine, what do you expect,miracles?

The souls of Minnis and Lloyd after they depart this earth should eternally burn in hell as justified retribution for their traumatization and crippling of the minds of so many school aged children. The real science has shown for many months now that the schools should never have been ordered closed and that virtual learning at home by students is an abject failure for all too many well known reasons. Yet Minnis and Lloyd continue to pander to the teachers' union leaders and teachers themselves who want an easier life outside the classroom with full pay and benefits, even though the real science has shown for many months now that teachers have very little risk of catching the Communist China Virus from school age children in classroom settings.

Truth be told, Minnis and Lloyd could not care any less about the critical need of our children to experience learning in a classroom environment, and that's because our children, unlike teachers, don't vote. But many parents do vote, and they should not forget the traumatizing social disorders and other serious mental harm Minnis and Lloyd have caused their children by wrongfully keeping them locked-up at home.

Stop soft balling reportin what you're been fed by we colony's crown ministers!
I would love a reporter to sit across from Comrade Jeff to watch em buckle down in sweat after a reporter steers him down with, Mr. Education Minister, Jeff, looking back since shuttin' down all the schools, would you mind to precisely count aloud the number of times, you've promised the parents' of school-age children, I give you my word as minister of education, your children WILL return' to face-to-face classroom instructions on such a date?
Shakehead a quick once for upyeahvote, think em's goin' snap on the reporter, a slow twice for not a chance?