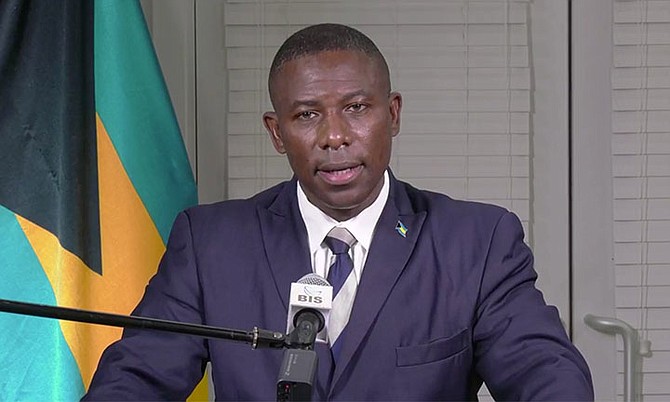 AS the United Kingdom became the first nation to start to vaccinate its citizens against COVID-19 yesterday, Health Minister Renward Wells said the government is currently engaged in its own talks with several vaccine producers.

He said Prime Minister Dr Hubert Minnis is “leading the charge” on those discussions and added the government will not import any vaccine that will put people at risk.

He reiterated that the Bahamas remains on the “queue” to receive 80,000 doses of a COVID-19 vaccine whenever it becomes available, which the government has already made a $250,000 down payment towards.

“The total cost is going to be about $1.6 million,” he said. “We’ve already paid $250,000 of that and so we’re just waiting for the WHO (World Health Organisation) to approve whether it’s Pfizer, Moderna, AstraZeneca, I think the Chinese have about two vaccines out, the Russians have about two and a number of other countries such as Israel and other nations in Europe are developing vaccines as well, and whichever that WHO agrees to, that’s the one that we’re going to be using.”

He added: “But, the Bahamas is also in negotiations directly with the various known brands of vaccines that are being developed such as Pfizer, Moderna, AstraZeneca. We’re speaking to them directly. We haven’t reached out to them directly. Interestingly enough, they’ve reached out to us and we’re doing our due diligence as a nation and the Prime Minister is actually leading the charge on that. “

Mr Wells said while officials want Bahamians to take the vaccine, no one will be forced to do so. He also said the vaccine will be safe.

“You would’ve heard the prime minister say on Sunday that whatever vaccine we do get, he’ll be first in line to take the shot and so we want the Bahamian people to know whenever it is we secure and procure the vaccine, we want them to take it,” he stressed.

Yesterday, the UK became the first nation to begin vaccinating its citizens with a fully vetted and authorised Covid-19 shot, CNN reported.

The first Briton to get the Pfizer/BioNTech vaccine was 90-year-old Margaret Keenan. She received the first of two doses less than a week after the UK became the first country to approve use of the drug.

PAHO assistant director Dr Jarbas Barbosa has previously said the Bahamas can have access to the COVID-19 vaccinations between March and April of 2021.

Asked if the vaccinations will be made freely available to anyone who wants it, Mr Wells replied: “The vaccines in country now are all free of charge…I would like to say that based on the policy, the established policy of the government that we will continue with that free of charge seeing that we would’ve already spent the money and what it means for us as a country that we need to get our people vaccinated so that we can open up in the economy and move in that direction.”

Pfizer has formally submitted a request to the US Food and Drug Administration (FDA) to authorise its COVID-19 vaccine for emergency use.

An analysis released by the FDA yesterday morning stated there were no safety concerns found to stop approval for vaccines. However, the FDA said it plans to meet tomorrow to make a formal decision for the Pfizer vaccine.

Moderna, also seeks permission for emergency use. The FDA will meet again on December 17 to discuss Moderna’s request.

Yesterday, Mr Wells said his ministry has already developed a strategic plan to distribute the vaccine in the Bahamas.

“The Ministry of Health developed that strategy whether it’s Pfizer or Moderna,” he told reporters. “If it is Pfizer, the $1.6 (million) is simply just getting the vaccine. We have to put out probably an additional the overall plan I think calls for about somewhere in the area of maybe $4.5 million dollars because we’re going to need to be able to purchase the freezer equipment because you have to keep Pfizer vaccine at negative 80 degrees.”

He continued: “…We are also looking with the Ministry of Works to be able to source the kind of equipment because we’re going to need to store it in country so we need to be able to get the kind of freezer so the engineers that the Ministry of Works are working on the HVAC – the heating ventilation air conditioning system – that will be necessary to hold that kind of vaccine.

all I am hearing is money , money , money. Where is the money going to come from? Who is going to pay for all of this? Are you going to spend , spend, spend and then tax, tax, tax?

So nothing was done when the whole world was securing their vaccines, we waited for the salesmen to come knocking on our door. I rather think the salesmen are leading the charge, not the PM. They want to sell as much as they can before any nasty longer term side effects show themselves, or worse, before they have to give up the patent.

This ain't brain surgery. We need the Moderna vaccine. NOT a Russian or Chinese vaccine.

The Bahamas is FAR FAR behind from getting anything

I actually think that our backwardsness may be a benefit in this instance. Let other nations be the guinea-pig for this hastily developed concoction.

"I think the Chinese have about two vaccines out, the Russians have about two and a number of other countries such as Israel and other nations in Europe are developing vaccines as well, and whichever that WHO agrees to, that’s the one that we’re going to be using.”"

So in other words, all of our doctors in the Bahamas are just ignorant fools who know nothing about vaccines or medicine and we need to take order from the WHO ? Everyone can read between the lines here and know exactly what is going to happen. The Chinese will offer their vaccine to us at a very cheap rate, and our Govt will jump at the chance. China has long wanted our country for themselves, and that is much easier to obtain if there is nobody to object.

Really? Why is it necessary for ALL islands to be vaccinated at the same time? I'm sure there wouldn't be any kick-back on those freezer purchases, right?

Unless I personally acquire and inject one or more the particular vaccines into Minnis, however many times may be necessary, the last thing I'm going to do is take him at his word that he has taken any of these vaccines, especially any made in Communist China that may well be put under a brand name to add an air of trust.

I'aint no damn fool like Minnis thinks most of us are. I've done my careful research on most of these vaccines coming down the pike and there isn't a one of them I would dare risk taking. And many of the world's leading physicians who are on the frontline of fighting COVID-19 have made it known they feel the same way. They would rather take their chances getting the Communist Chinese Virus and surviving it.

Many fools are going to learn the hard way that, unlike vaccines developed for measels, chicken pox, flu, etc. that work on the basis of exposing the body to a very small unharmful quantity of the virus to trigger the immune system into producing anti-bodies, these all too quickly developed COVID-19 vaccines work on the basis of changing your gene structure (RNA) to spur the production of anti-bodies for the virus. That's genetic re-engineering by any definition, and I for one don't trust financially greedy and power intoxicated partnerships between big pharma, hign tech giants and governments to play around with the basic building block material of my life, my very existence.

Sorry, but unless I'm misunderstanding your last paragraph there is zero, zilch, nada genetic modification of the human body or human cells going on. There are 2 different types of COVID vaccines currently being developed, The Pfizer & Moderna vaccines are mRNA type vaccines, and the Astra-Zeneca & russian ones are Viral Vector vaccines.

mRNA vaccines are relatively new. The way they work is somewhat hard to explain, but essentially the vaccine is a genetically modified harmless piece of the virus (mRNA sequence). This mRNA sequence is a code that tells the muscle cell to produce a harmless "spike protein" (antigen) that is found on the surface of the COVID virus. When the muscle cells produce the spike protein our immune system realizes that the spike protein doesn't belong there and immediately starts designing antibodies that can attack the actual virus should the person ever become infected.

Viral Vector vaccines are somewhat similar except the harmless spike protein is introduced to the body using a modified adenovirus (common cold virus).

As always, everyone has a choice as to whether or not they wish to get vaccinated and I'm respectful of that.

Many of us have read plenty of the science put out by the highly motivated collaborators behind the unusually fast development of these vaccines. But I'm not willing to place any faith whatsoever in what's been pushed to the public by the so called 'scientific community' that is 'owned' in large part by the very evil partnership that now exists between greedy big pharma, the high-tech giants and power hungry corrupt politicians the world over.

Believe what you want, but I know first-hand how the development and approval process works, and why it normally takes a lot longer to get these treatments approved.

I think most of us know proper clinical trials take many years for many good reasons. 'Warped speed development' and 'safe vaccines' should never be uttered in the same sentence by any responsible health official anywhere.

I smell the strong whiff of a health minister stripped of vaccines portfolio.
We never did get out in front of the why behind Mr. Minnis, December 2017 stripping his minister Rommy Ferreira of his environment portfolio? A stripping that was conducted so in secret, not even Rommy knew of it being transferred to the office prime minister, that is until the media began reporting about it?
Shakehead a quick once for upyeahvote wasn't that the master file contained the OBAN environmental assessment, a slow twice for not.