‘My Suffering As I Waited For Justice’: Kenyan Slept In Car And Went Without Food As He Fought Legal Battle 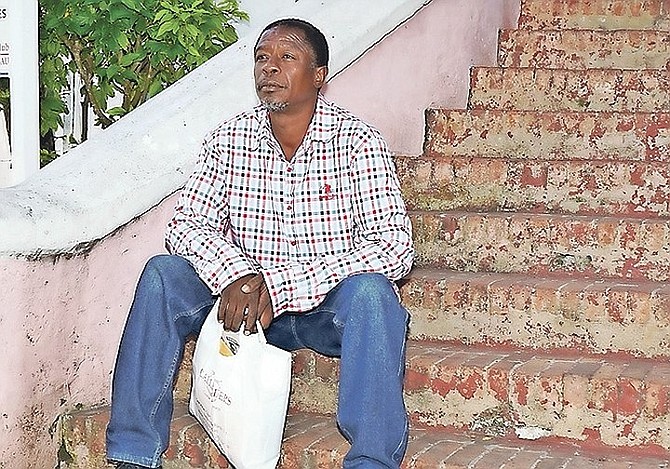 A man who was unlawfully detained for more than six years was forced to sleep in a car and go hungry as he fought a legal case that resulted in him being awarded $641,000.

Douglas Ngumi’s current lifestyle is a far cry from that of a man who has just won thousands of dollars for unlawful detention, the largest damages ever ordered in a Supreme Court case of its kind.

The Kenyan national said he lives in a Mitsubishi L300 borrowed from a friend, often goes hungry, some days having nothing to eat, and bathes outside.

His most prized possession, he said, is a cell phone given to him by his lawyers – though he repeatedly loses such devices because he said he can’t properly secure them.

“From 2017, I’ve never slept in a bed or locked a door,” he said yesterday in his first interview since the verdict announcing his record award.

“I sleep with one eye open. I bathe outside and I look for a secure spot to do a number two. I don’t like to go in people house so that if anything goes missing, you can’t be blamed.”

Justice Indra Charles awarded Mr Ngumi $641,950 in damages last month after a trial in which it was revealed that the 49-year-old endured cruel and inhumane treatment at the Carmichael Road Detention Centre during an unlawful six-and-a-half-year imprisonment that began in 2011 and ended in 2017.

Mr Ngumi said he learned about his victory when a friend told him on November 30 that he was on the front page of The Tribune.

“It was a surprise to see it on the front page and then have people come and tell you you’re on the front page, so then I went and got the paper to read it myself,” he said. “I didn’t have money to buy the paper, so someone actually gave it to me for free.”

Mr Ngumi has a complicated view of Justice Charles’ ruling: he is happy he won, but is dissatisfied with the figure he has been awarded.

“I was emotional and I was glad about it to know that that could have happened,” he said, “but it’s not satisfactory because the request was $11m, so we was thinking even if it’s not $11m and even if it’s not half-way to that, it would come at least a quarter of what we asked for.”

Attorney Fred Smith has told Eyewitness News that he will appeal Justice Charles’ ruling, saying the award was “grossly inadequate” and creates a “terrible perception of social inequality”.

If the award remains at $641k, Mr Ngumi said he dreams of buying a property on which to build a house and starting a business.

“I would like to get a cheap but nice property in a nice area and a business,” he said. “I am a mechanic by trade so anything looking at that, like say, new and used car parts, I would focus on that for my business.”

He said if he takes care of his immigration issues in the Bahamas, he wants to travel to Kenya to visit his parents, his sister and his 22-year-old daughter who he hasn’t seen since she was a baby.

“She doesn’t know me,” he said of his child. “I came here for the first time in 1997. She don’t live close to my family in Kenya so we’re trying to establish contact with her.

“I want to get myself established first before I travel. I would like to get my documents to be on the safe side. I don’t have nothing. The lawyers are trying to get one for me now.”

Mr Ngumi testified in the Supreme Court that his identification documents were lost at the detention facility.

“I don’t have fun here,” he said. “I don’t have the funds to have fun. Fun for me is watching a soccer game or going somewhere where I can watch a movie on a TV or something. I have no TV, no computer, I only have a phone.”

After leaving the Detention Centre in 2017, Mr Ngumi said he was homeless on Junkanoo Beach, “just walking around waiting for the day to go because I didn’t have nothing.”

Eventually, he said he lived in an unfinished building of a friend but left there in February this year and has been living in a car ever since.

During his trial, Mr Ngumi recalled three occasions when teargas was used on detainees. He damned the conditions of the facility, saying one dorm held 500 people when it had a capacity for only 50. He said when he left the centre, he was soon diagnosed with tuberculosis and was eventually detained for eight months at Princess Margaret Hospital.

He cried while testifying in detail about one violent episode in particular in which he was stripped naked, tied, handcuffed under a table and beaten with a PVC pipe. His testimony was accepted as definitive by the judge because government lawyers did not call witnesses or produce evidence in the trial.

Reacting to the ruling, Immigration Minister Elsworth Johnson has said the Bahamas “is a country of laws,” while Immigration Director Clarence Russell has said his department intends to “make sure people are safe, treated as humanely as possible and that due course is taken”.

On immigration authorities, Mr Ngumi said: “How they operate, somebody need to look very closely into what has been going on into government institutions. A lot of things happen through hidden doors. Officers don’t put officers in shackles so you never know what really goes on unless someone talks about it.”

For his part, Mr Smith blasted the government for not allowing people like Mr Ngumi to seek gainful employment.

“I begged the government to give people like Mr Ngumi a general work permit so that they can at least provide for themselves while their situations and circumstances are being dealt with,” he said yesterday. “It is inhumane and degrading to prevent a person from putting food in his mouth. And it is not just Ngumi, it is all the cases that I am doing and it is absolutely dehumanising.”

A man who was unlawfully detained for more than six years was forced to sleep in a car and go hungry as he fought a legal case that resulted in him being awarded $641,000.

As I said yesterday, this is Fred Mitchell's bobo... I hope they don't try make it look like it happened in the past 4 years. Fred Smith has found a new cash cow, his market is now exploiting the blunders of the governments. Soon more lawyers will tap into this lucrative market. I can't say I blame them. Those fellas should have been charged and deported 90 years ago. Now they are still here and will tap into monies we don't have!

What is this dude even doing in the Bahamas? I guess since he hasn't seen his 22 year old daughter since she was born and he was a broke bum, that he sure as hell wasn't sending her any financial support? A deadbeat dad that skipped out no doubt. The scumbag lawyer told him that he could get him a lottery ticket. Now we're doling out money to illegals like we're rich? This isn't the US, the Bahamas doesn't have an endless money printing machine, we have to borrow. The money paid to him has to passed on as debt to future generations of Bahamian children. Now that he's got his free paycheck off of Bahamian idiots for nothing but a walk in the park compared to life in Kenya, ship him back. These people are a plague and need to stay in their own shitholes instead of invading our country. We have enough Bahamian bush mechanics on this island to have a carshop on every corner, we don't need Kenyan ones. I wonder how our Bahamian mechanics will feel to know an illegal Kenyan bush mechanic got $641K from the government while they gotta work like 30 years to see that. What a joke.

"Shitholes"...?! So it sounds like you would only want to welcome the kind of people who have money to throw around. Everyone else should just stay home. Interesting viewpoint. I wonder how other countries feel about us visiting them. Say the US, Canada, England, the EU, etc... And then lets say one of us might get 'wrongly accused' and treated the way this man did. Now lets say this person might be you and after 6 years of detention someone told you to go back to YOUR shithole without any financial settlement. You really should learn to have some empathy for your fellow man.

I wonder how other countries feel about us visiting them. Say the US, Canada, England, the EU, etc... And then lets say one of us might get 'wrongly accused' and treated the way this man did.

He was here ILLEGALLY obviously, maybe he overstayed, maybe it was human trafficking. We don't know because they choose to ignore that part of the story and keep it vague... his origins in this country, and instead make a sob story. But what is he doing here? Is he a tourist? I highly doubt it, any tourist would have went home long ago. When I travel to foreign countries as a Bahamian citizen, I travel LEGALLY. I spend dollars as a tourist into their economy, stay in a hotel. I don't go there to bum it up, be a burden on their society and try to live there illegally. I obey the law. He's lucky this is the Bahamas, other countries would throw him in a labor camp and make him pay for wasting their time and resources. Anyone, including Bahamians, that illegally tries to establish themselves in a country should be shipped out back to their country of origin asap, not given hundreds of thousands of dollars. Ridiculous.

Mr. Ngumi, hopefully someone in Nassau will pass you this message:

I would take the money and get out of this country.

And the minute he won that, more Africans at the detention center start kicking up drama too.

hey Bro your plight is nowhere near to the level that WE BAHAMIANS go through daily for the past 50 odd years, if you got some money from us ( Bahamian taxpayers), collect your win and please get the f#$k out and not return any time soon thank you.