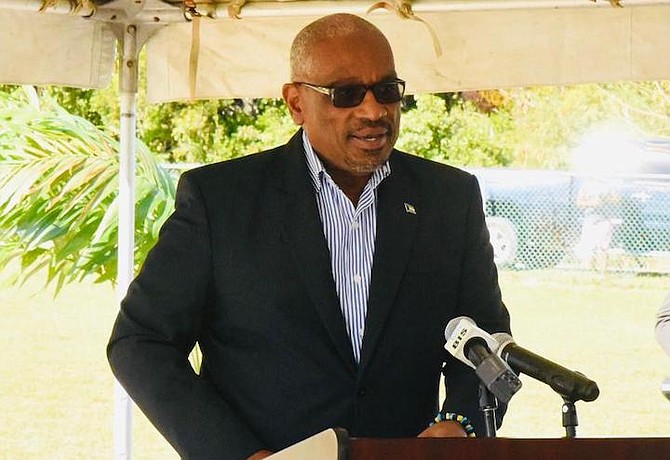 PRIME Minister Dr Hubert Minnis said the government will offer lots of land valued at $150,000 for about $50,000 to young professionals in the western area of New Providence.

His comment came on Friday during a presentation of land grants ceremony in Crossing Rocks, Abaco.

He said the community will have a swimming pool and a community centre. Dr Minnis did not say where the area will be located, nor when the lots will be available for purchase.

“We’ve identified a property,” he said. “It will be upscale and the overall value of the land – probably 90 by 100 – and we’ll put in all the infrastructure, community centre, etc. The lands in the west are usually about ($120k to $150k), most are about $150k. We would sell it to the young professionals for about $50,000 or less because it’s really their land. Crown land is really the people’s land, it’s not individuals, it’s the people and we just want to ensure that the people receive their land.

“They would purchase the property at about $50,000, the property with all the infrastructure would be worth $150,000, which means they would automatically qualify for a mortgage and have their homes built without that great outlay that’s prohibiting most young people from building today.”

He added: “We would allow them to build duty free, so all the materials would be duty free, inclusive of the utilities, refrigerators, stove, microwave, etc. And I think that’s really to give the young professionals a start.

“With this progressive and aggressive programme that we’re doing – because we want to do development throughout all of the Family Islands now that we’re in this era of Airbnb – we’re encouraging people to take advantage of it. There are a lot of opportunities in the Family Islands, especially (because) of COVID, lots of people want to go to the Family Islands which are COVID-free and we’re encouraging Bahamians to take advantage of it. Once they identify and show that they are serious, we would grant them the land so that they can proceed because just having a lease poses a problem.”

During Friday’s ceremony, Dr Minnis said his government was committed to ensuring that people of Crossing Rocks – many of whom were forced to relocate following Hurricane Floyd in 1999 – received title deeds to rebuild their properties.

“This figure represents more than 60 percent of the properties in Crossing Rocks which were destroyed by the 1999 storm,” he said.

Overall, 140 grants have been finalised for Bahamians under the government’s land grants initiative, Dr Minnis said.

PRIME Minister Dr Hubert Minnis said the government will offer lots of land valued at $150,000 for about $50,000 to young professionals in the western area of New Providence.

Small wonder so many who are already living in the increasingly over-crowded Killarney constituency are absolutely livid with Minnis and will never be voting for him again. lol

"Upscale" community. roc wit doc will do well to stop his foolish utterance. What is Bains Town and Grants Town?

Its the peoples time and the Bahamian people deserve the doc

Pinedale must be downscale so their streets flood. and there is no relief

What's the definition of young professional? do i have to openly and loudly be a torch bearer or can I just quietly be one? Do I have to live in Kilarney already and hold a voters card there? And what about all the VAT and duty i had to pay to build my house? can i get a refund perhaps? And what happened to the first time buyer exemption page on inland revenue website?

... if crown land is the peoples land then why offer it for sale at all? Why not let Bahamians squat on land as non-Bahamians do? Better yet let Bahamians build with out building codes too so we could save even more money!

All this nonsense means is that we are officially in election mode!

"We would sell it to the young professionals for about $50,000 or less because it’s really their land. Crown land is really the people’s land, it’s not individuals, it’s the people and we just want to ensure that the people receive their land."

He just wants the people to receive their land? That is nonsense, and I just question his truthfulness here. People have been yelling and screaming about Crown Land for decades in this country. Where has he been all those years? Has he just heard about Crown Land like last week?

Nobody cares about his development and the so-called property value and whatever other high minded sounding terminology he is spouting. We just want the land.

It's so funny how they talk like they are doing something. 56 grants were given in 2019 and now an additional 24 were given. Ask a grocery store clerk if he put out on the shelf 56 bottles of ketchup in 2019 and has so far only put out 24 bottles this year 2020, would he still have his job? These people play like it takes 5 years to tie their shoelace.

Find out how much Crown Land there is (as yet unassigned), include the biggest portion of the rumored big tracts owned by the Maynard family in Andros and then divide it up evenly among all Bahamians 18 and older. Save some for expansion of airports and hospitals and such, but the biggest part needs to be shared. Put all the lots on little papers in a big hat and go down the list of names one by one and pull a paper out and say who gets what - Island Luck might let you use their live broadcast to do this.

There is saying that goes something like this : Ingratitude is worse than witchcraft. And the responses by some of these well ensconced idiots is a prime example of this phenomenon currently plaguing our nation.

Everything our Government does has to be spun in a direction of negativity. Here it is where our Government is providing an opportunity for young professionals to establish themselves with real property at an early stage of their careers and you have these mean spirited individuals attempting to criticize what is an innovative and magnanimous gesture on the part of the FNM Government.

During the time the PLP Government was in Office it was every person for themself and the devil catch the hindmost. Did we hear of any such projects like the one our Honorable Prime Minister is putting forth? Absolutely not.

So it would behoove these mean spirited and bad minded types to back off for a little while and give the young professionals the opportunity to become vested in property. These young professionals are the future of our nation and the sooner they have real property the quicker they will turn to putting their minds to build our nation.

I am asking Tribanon, who lives in a gated community, how old was he when he purchased his first home? Was it inherited? Was it from kickbacks? Pray let us know.

Finally, you have to give Jack his jacket on this one. Prime Minister Minnis deserves applause for this most creative and innovative way of empowering the young professionals. We have never seen, heard, sensed or imagined anything like this before. God Bless you Prime Minister. We love you. Stay healthy and continue to lead us down the road to prosperity.

... if Bahamian governments ever focused on controlling illegal immigration, improving real education, not stifling small to medium sized business growth with over regulation, enforcing a system of meritocracy, creating a level playing field for all Bahamians while not encouraging their dependence on which party is in government for them to advance while curtailing predatory banking practices, then "young professionals" and all others would be able to afford to buy a piece of property. This is just another thinly veiled attempt to use the peoples resources to buy votes!

The PM's remarks smacks of elitism. Why is only the West "upscale"? Who is "young"? Who is "professional"? Doctorate degree or will an associates do? Trade school? The business person who did not go to college seems out of running for sure. He just continues to finds ways to needlessly divide the people he serves.