Insight: Dr Mccartney Was A Pioneer And Inspiration 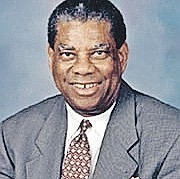 YOUNG and veteran figures in The Bahamas’ psychiatric community gathered for a Zoom session last week to pay tribute to Dr Timothy McCartney – the “father of Bahamian psychology” – who died last month from COVID-19 at 87.

Dr McCartney was the first Bahamian to earn a PhD in psychology. He worked as a clinical psychologist at the Ministry of Health mostly at Sandilands Rehabilitation Centre from 1967 to 1993 before relocating to the United States.

The Zoom tribute event featured a mixture of tributes, dramatisations and even a snippet of a recording from a Dr McCartney interview. Dr McCartney was widely remembered as a pioneer, for his eagerness to help the professional development of his peers, his infectious personality and for his gift as a communicator. He was described as a good cook and a capable musician who liked to tell stories. For some, he played a notable role determining the field of psychology in which they ultimately chose to make their mark.

Dr Carolyn Hanna said she knew Dr McCartney all her life and found him to be like a big brother. She said he was always interested in behaviour and mental health.

Dr Wendy Fernander, a psychologist and current president of the Bahamas Psychological Association which Dr McCartney started in the 1960s, said Dr McCartney was “undoubtedly a pioneer in the field of psychology in The Bahamas and regionally”.

“He was an inspiration to all who had the privilege to know him and meet him,” she said. “He was the country’s first clinical psychologist and the first chairman of the Bahamas Psychological Association.”

Dr Michael Neville, with whom Dr McCartney was a close friend, wondered what would have happened if more people in The Bahamas had listened to his friend.

“He was able to transcend clinical sessions and he gave great advice,” he said. “I remember way back in the early 80s, he was talking about women’s issues long before anyone else was. He spoke about crime back in the 80s, warning us that we would all end up with bars and that the use of violence would become political like Jamaica. No one listened to him. That’s a great sadness because that would have helped so much if people had listened to him and taken appropriate action back then.”

In addition to discussions about Dr McCartney’s impact on the field of psychology in The Bahamas, the event was replete with reflections on who Dr McCartney was as a person.

Richard Adderley recalled being fearful as a 21-year-old of sharing a room with Dr McCartney during a weeklong work visit to a Family Island.

“Dr McCartney was big in stature, but he was a gentle giant,” he said. “He made that week fun. I can remember almost 40 years later some lessons I learned from him. First of all, on the first night he shared with me, he said ‘Richard, you have to pack your own shoe’, it means as a psychologist you have to choose your destiny and you have to go after it. The second lesson was the importance of thinking out of the box and being creative. And finally, he talked about the importance of taking mental health outside of Sandilands. He said it’s just not about Sandilands, it’s just not about working within four walls.”

Dr Niambi Hall Campbell Dean said she never met Dr McCartney but felt like she did by engaging his works. “I remember as a graduate student reading Neuroses in the Sun and becoming so excited that there was another Bahamian that was talking about these things and bringing these issues to life and, even though I’m not a clinical psychologist or a counselling psychologist, I’m a community psychologist and I feel like I am standing in his footsteps and his path and I just wanted to recognise that his reach is beyond mental health,” she said.

Dr McCartney obtained a doctorate in psychology from the University of Strasbourg in France and also studied in the United States, Switzerland, Jamaica and England. He was a distinguished Professor of Management and the Paul Hersey Chair in Leadership at the H Wayne Huizenga School of Business and Entrepreneurship, Nova Southeastern University, Fort Lauderdale, Florida where he was awarded in 1998 and 1999, the Excellence in Teaching Award. In 2008, the School awarded him the Professor of the Year Award and he retired as Professor Emeritus.

A great son of the soil. Penny bank savings corner or the purity bakery corner. A man from over the hill.

He has done well. He is in the hands of God now,