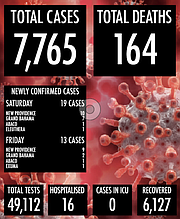 THE country recorded 32 cases of COVID-19 between Friday and Saturday.

Up to press time, 16 cases were in hospital.

The country’s death toll remains at 164, after a new death was recorded last week.

And most Bahamians would be very alarmed to know about the increasing level of cases involving guests at Atlantis and Baha Mar.