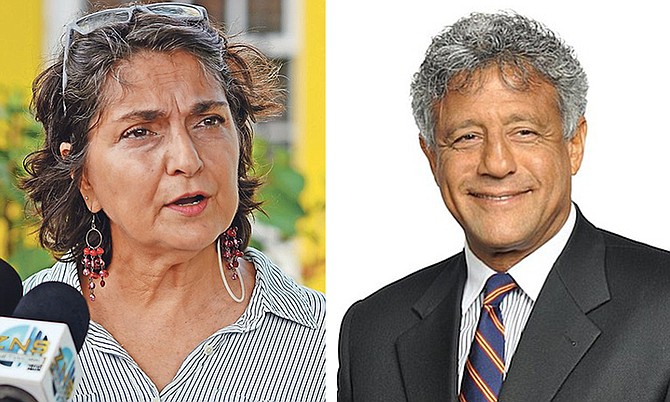 Environmental activists yesterday admitted they are seeking "a Christmas miracle" as the Bahamas Petroleum Company's (BPC) drilling ship closed in on the location for its first exploratory oil well.

Sam Duncombe, reEarth's president, told Tribune Business it was "supremely depressing" that global positioning (GPS) tracker co-ordinates showed the Stena IceMax bearing down on its Perseverance One well location in waters some 90 miles west of Andros near the The Bahamas' maritime boundary with Cuba.

With the activists' Judicial Review challenge to BPC's permits still awaiting a court date and judge to hear it, and the imminent Christmas holiday likely to close down much of the judicial system, time is rapidly running out to obtain a stay or Order halting the oil exploration outfit's activities.

Given that it expects drilling of Perseverance One to take place within 45-60 days of starting, it is possible that much of the work BPC intends to perform could be completed before the case initiated by Waterkeepers Bahamas and the Coalition to Protect Clifton Bay is heard or any ruling issues.

"We've been keeping an eye on that," Mrs Duncombe said of the drilling ship's progress. "You know what? It's Christmas, so maybe we'll have a little miracle. That would be good. I guess we're at the mercy of the courts and a date. There's nothing we can say or do until we hear back. Fingers crossed, toes crossed, all of the above, we're hoping for a Christmas miracle."

She also voiced optimism that the letter sent to the Prime Minister and Romauld Ferreira, minister of the environment and housing, by 17 US congressmen and women urging The Bahamas to reconsider allowing oil exploration in this country's waters would lead to greater dialogue between this nation and the US and creation of "a no drill zone across the entire Bahamas, Florida and Cuban coasts".

"That's what we should all be working towards," Mrs Duncombe said. "I was thrilled to see that letter come out. It amplifies and underscores what we've been saying. Figuring out the Government's approach and position is like shooting in the dark. One say they say 'yes', the next they say 'no', and another day it's 'maybe'. We're hoping this letter clarifies what direction we should be moving in."

Meanwhile, Fred Smith QC, the Callenders & Co attorney and partner representing the activists in their Judicial Review challenge, told Tribune Business that if Dr Hubert Minnis and many of his Cabinet ministers were opposed to oil drilling in The Bahamas they will "not throw up procedural obstacles" that block a rapid hearing of the action's merits.

Both he and his clients have voiced fears that the Government will try to knock out, or slow, the Judicial Review challenge down by demanding that the activists provide "security for costs" - effectively a bond that will be placed in escrow to cover the administration and BPC's legal and other expenses arising from the case and/or delays to their plans.

Mr Smith, though, argued that the Government's position that BPC's licences and other agreements were legally watertight, and cannot be ended without exposing the taxpayers to a potentially massive multi-million dollar liability, was "a red herring".

He explained that the Judicial Review was not asking the Government to break these deals but, rather, confirm whether the oil explorer has been granted all the permits it needs for exploratory drilling under the Acts passed by Parliament.

These, Mr Smith said, included an excavation permit under the Conservation and Protection of the Physical Landscape of The Bahamas Act, plus site plan approval as demanded by the Planning and Subdivisions Act. Compliance with the Merchant Shipping Pollution Act and the Environmental Health Services Act was also required.

Acknowledging that BPC will "doubtless be going as fast as possible", the outspoken QC said of the Government: "It isn't sufficient for them to wipe their hands clean like Pontius Pilate politicians in Parliament.

"I find it shocking that members of the Government would say that they cannot break the licensing agreement or that they were advised that they have to honour it. This is very strange and new language for Bahamian politicians. After all, both the PLP and FNM have never had the slightest compunction about breaking the Hawksbill Creek Agreement, the most economically important agreement in The Bahamas to-date........

"It is shocking they should be so terrified of BPC. This is a red herring they are throwing up. Nobody has asked them to break BPC's licence. The FNM government repeatedly renewed the licence, and we argue they failed to comply with the law on consultation," Mr Smith continued.

Why don't these two "CLOWNS" just go away. We shall DRILL for the OIL and thats that. Let them drill Prime Minister. Let them drill; A born Bahamian.

Likely scenario: They drill, find lots of oil, government gets lots of money and cheap oil, my BPL monthly bill increases by 400% regardless. What other "scenarios" you guys see?

You got it. Lots of money for those who always get the money. Not a red cent will go into the bank account of any ordinary Bahamian. Besides, Bahamians are quickly becoming a minority in the Bahamas anyway, so it probably doesn't matter. I heard another 300 Mexicans gone into Treasure Cay Abaco to complement the other 300 that went to Guana Cay. Wonder what other islands have Mexicans and Guatemalans working while we starve to death?

Well said nassau98! When these clowns offer a solution to our $9.5 billion debt load, I will listen to their rants.

Not that I am against the idea of drilling for oil but to offer an answer to your question: fully privatize all government companies, bring salaries & benefits for government employees inline with the private sector, and cut down (wish I could say get rid off) government corruption.

Contrary to popular belief if you made government salaries in line private sector most ppl would be making more money. Unless you are referring to the front line civil servants who just answer the phone or open doors: you don’t have to take my word, you can check the Bahamas handbook which publishes this info or the public service act

The miracle will be finding oil for the Bahamas. Good luck to the company and drill safely.

Miracle? There's gotta be something down, for someone having to wait 10 years to get approval. I hope they find lots of oil as you mentioned in a safe way. This shouldn't be hard for them to do. It's apparent that they're using top of the line machinery while keeping up with the ever so fast-paced technology.

LOL - Britain7 and Columbus the Invader - you finally got some friends (created some new aliases?). Of course they are "born Bahamians" parroting BPC's insipid talking points. You really should be able to do better than this. It is quite pathetic. Tell me, is the company really running out of money, or are they just too cheap to spring for a proper PR effort?

Bet you wan cry na. Da compani done start to drill and all work you do to come on here dissin was in vein. Rude peyple never get their way. I hope ya home cryin, big baby. Da govment just tryin to help da poor peyple and you want stop dem. Rich prick.

Hi Voly, I hope you are well. The drill is underway - my cousin text me the good news.

It looks like we have a growing pro-oil movement in the Bahamas. Good on them.

You are a sick fluck. Why won't you disclose your identity, if I will? Weak pale office boy? Likes to hide, for good reason. Your job is done, get lost now.

Give it a rest Porky. Oil will transform the Bahamas... if we have it.

I'm guessing this oil company did not go through our "One Stop Shop" investment office, otherwise all requisite permits and compliances would have been done from the get go. Wait though, did we ever get that one stop shop office set up? Of course not - LOL.

Without Comrade Sister Sam Duncombe, and King's Counsel Freddy, we'd be without opposition force...and, what a much-respected force they are.Shakehead a quick once for upyeahvote, a slow twice for not?

The Chinese have delayed this drill and ruined our tourism. We should ban them from here for good.