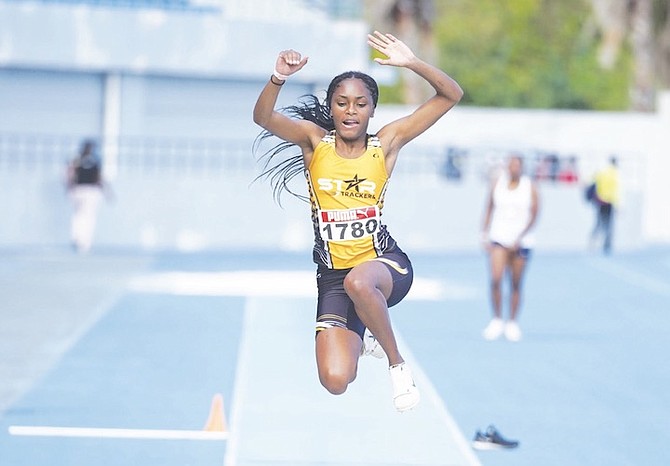 AN athlete competes in the Bahamas Association of Athletic Associations’ first track and field meet - held on Saturday at the Thomas A Robinson National Stadium - since the coronavirus pandemic broke out in March. Photo: Terrel W Carey/Tribune Staff 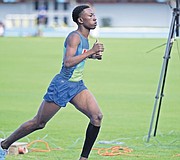 Under the theme: “Track is Back,” the Bahamas Association of Athletic Associations hosted its first track and field meet since the coronavirus pandemic broke out in March.

The BAAA, in closing out what has been a dramatic year of postponements and cancellations of various local and international sporting events, staged the Odd Distance Track and Field Meet at the Thomas A Robinson National Stadium on Saturday.

“We’ve been planning for the COVID-19 environment since the lockdown and we recognised very early that certain things had to be in place,” said BAAA president Drumeco Archer. “We’ve been in communication with the Competent Authority, giving them the assurance that we could do this and we could do this well.”

Archer said the meet on Saturday was proof that they could host a safe and successful meet, so he was very happy with the outcome, considering that the athletes performed at a very high level.

“I think what we know we have to look at is that our competition will have to be in a non-spectator environment and so we will have to absorb all of the expenses,” he said.

“At the end of the day, I think we will have to wrap our heads around how we can deliver a safe meet for our athletes in readiness for regional and international competition.”

With all indications that the CARIFTA Games might have to be pushed back from the Easter holiday weekend until the summer in Bermuda, Archer said they will have to concentrate on finding more meets for their athletes to sustain their training programme.

However, one of the athletes is only 13 years old and is not eligible for the games as athletes must be 15 years or older in order to participate.

There were no qualifying standards for CARIFTA or any other international meets attained at the Odd Distance Meet, but for the most part, most athletes were just delighted to be competing again.

“It’s good to be back. We’ve been out since March. No competition, so competing today was a good thing,” Kemp said. “Next year, I want to run my personal best in all my races and qualify for the national teams.”

In winning his heat of the boys’ under-17 600m in 1:29.09, but placing third overall, T-Bird Flyers’ Amando Poitier too was thrilled to be back on the track. “I feel good. I came out here to participate and to do my best,” the 16-year-old Doris Johnson Senior High 12th grader said. “I felt very good. It was good to get back on the track.”

While the focus was on the younger athletes, some of the senior and elite athletes also competed.

The open women’s long and triple jumps saw collegian Charisma Taylor surge to victory in both events, while placing second in the 150m.

“On the whole, I think I did very well,” Taylor said. “It’s still early. It’s December, but I feel I’m in a good position for the season.

In August, Taylor returned to college and was training in preparation for competing at both the NCAA indoor and outdoor nationals, if they are contested, and going on to represent the country at the postponed 2020 Olympic Games in Tokyo, Japan in July, 2021 in the 100m hurdles and the triple jump.

“The hurdles have been going really good. My technique has gotten better, my approach has also gotten better, so I’m just looking forward to seeing how well I can do it at that event,” she noted. 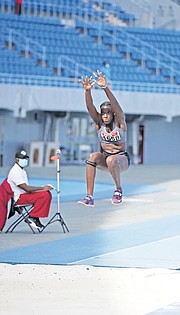 Myers, based here at home after graduating from college, said she was trying out a new technique and it turned out to be an indication of where she’s at in her training.

“It could have been better, but considering all that has happened, I’m pleased,” Myers said. “I’m in good shape, I’m eating healthy, I’m training hard, so I feel awesome. I’m looking forward to the rest of the season.”

Myers said she was looking forward to competing at the World Athletics’ World Indoor Championships, but that meet has been postponed due to COVID-19.

“We will see if we can get into some meets before the outdoor season,” said Myers, whose goal is to make the Olympic team as well. “If not, we will wait outdoors and go for it.”

Ferguson, currently at Fresno State in California, said she too was delighted to be home and competing.

“It was good to get my feet wet for the outdoor season,” she said. “It was good to see where I’m at. I spotted the few things that I did wrong, so I know what I have to correct.”

As for next year, the 22-year-old Ferguson said she is planning to see whatever senior meet she can qualify for, but there’s no major priority.

Meanwhile, Charlton, who has already secured an athletic scholarship to attend the University of Kentucky next year, won the open women’s 150m in 18.25 with Taylor showing her versatility coming in second in 18.61. Laila Cleare of Fast Forward was third in 18.67.

Home after graduating from the University of Nebraska in 2018 with a bachelor’s degree in construction management and now working with his family plumbing/construction company, Kaiwan Culmer said it was good to compete in another Odd Distance Track Meet.

“Instead of the full runway, we had to use an approach of 49 feet, which is not much,” Culmer said. “My usual approach is 131 feet, so it’s a significant amount of steps that I was losing out.

The goal for Culmer next year is to qualify for the Olympics.

Some of the other outstanding performances from the Odd Distance Meet came from some of the younger athletes, including the following: